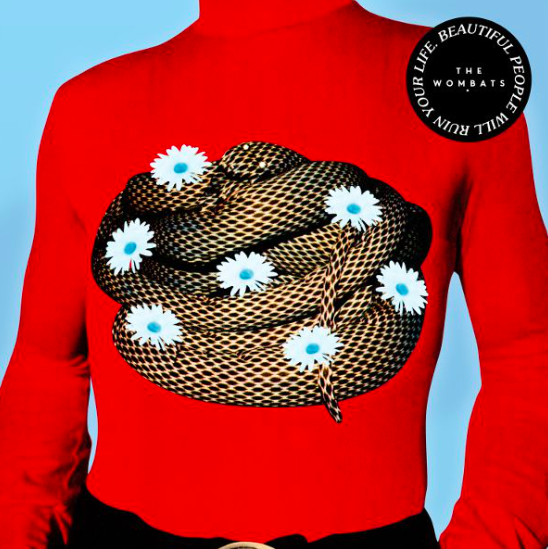 With grey skies and chilly winds serving as a constant reminder that it’s still winter, The Wombats come roaring forward with enough catchy riffs and waves of high-energy synth to thwart the bleakness of the season’s five o’clock sunsets. While a close listen to the lyrics on the band’s new album Beautiful People Will Ruin Your Life will expose the grand instrumentation as faux optimism, it’s just the shot of energy we need to keep our spirits high in this dreary time of year.

Following in the footsteps of their 2015 release, Glitterbug, the band continues its journey toward a more refined indie pop sound.  While that path may sacrifice some of the rawness associated with the trio’s earliest straight-up, indie rock roots, the evolved Wombat sound makes up for it with the addictiveness laced into many of the new tracks.

Beautiful People Will Ruin Your Life was built to highlight the group’s next step in musical maturity. One only needs to look at the album’s first single, “Lemon To A Knife Fight,” to feel the undeniable polish in their work. A driving, up-tempo drum rhythms and the jangle of acoustic guitar combine with a touch of retro-analog electric guitar to form the musical foundation as we are taken on the rollercoaster ride of a dysfunctional relationship. With a strong one-two-punch, the album’s next song, the anthemic “Turn,” is replete with a sweeping lyrical landscape, the hum of a heart-pounding undercurrent of bass, and soaring, synth-laden guitar, reminiscent of any of the more pop-friendly offerings of The Killers.  Together, these two works highlight the bolder and sleeker presentation the band envisioned.

Whether intentional or not, it would be impossible to listen to the album and not to hear some stylistic hints of fellow UK rockers, the Arctic Monkeys.  “Ice Cream” features a driving electric guitar growl and plodding drum thump that makes you want to stomp along. “I Don’t Know Why I Like You, But I Do” is a gentler offering, an ode to the unexplainable bond of love drift over a building cascade of lush electric guitar.  While anyone acquainted with the Arctic Monkeys will feel a familiarity with these songs, fans of a more carefree, dance-ready sound will appreciate the lighter approach The Wombats take in their works.

I would be remiss if I didn’t mention a personal favorite of the album, “Lethal Combination.”  “We’re a lethal combination/too lost for therapy,” frontman Matthew “Murph” Murphy coos just a couple lines after issuing an invitation to get “blind” drunk.  The ugliness of planned binge drinking, blackouts, and hangovers is made tender by the promise to hold each other’s hair when the inevitable self-inflicted sickness comes calling—all smashed against a saccharine-pop synth and diner-retro drum riff.  No matter how many times I listen to it, I cannot tell if it’s a love song, a confession, or a plea for help—a statement that can also be true regarding the album title.

The Wombats set out to create a more mature form of indie pop rock and the result is an album that you have fun listening to, with enough emotional depth to keep it elevated above your standard pop fare.   Beautiful People Will Ruin Your Life brings a sunny dreamscape, with a twist of emotional discord, just in time to save us from six more weeks of winter.

[This lovely review was handcrafted by Eo8’s own George Maifair.]