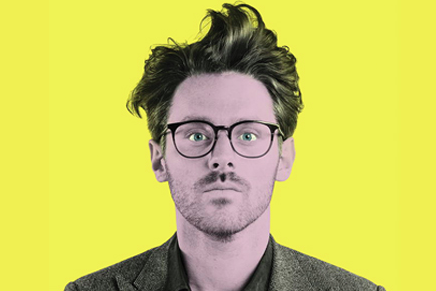 “I really started my new year with a whimper,” laughs Texas-based pop rocker Walker Lukens. “I played on New Year’s Eve outside in the 21-degree weather, woke up on New Year’s day, and slowly declined into sickness,” he says. “The flu was all around us.” Even so, that whimper is a minor dip in the Walker Lukens decibel level—having released Tell It To The Judge, his stellar LP produced by Spoon’s Jim Eno, and traveling the countryside to tour in support of it with his trusty band (except for the show or two he played solo after he gave them the flu), Lukens is coming through loud and clear.

“I started more as a traditional singer/songwriter playing an acoustic guitar, but everything about that experience made me want to play with a band, and to do more of a rock n’ roll thing that what I originally set out to do,” he explains of his direction shift, and of the album’s classic rock sound. “When I was writing the songs on this record, it was the first time I’d ever had a steady band, and the first time I started thinking of my songwriting for a band. A lot of the records I’d been listening to, like ZZ Top, gravitated that way too,” he says. “As a kid, I thought that was dumb, it was loud, but I was getting the bastardized versions of it in early 90s rock,” he laughs. “When I came back to it when I was playing with a band and enjoying that experience for the first time, I really dug those records. There’s a blueprint to making a rock n’ roll record, especially a classic 70s one; I loved the silliness, and loved that you have to pay homage to where you came from,” he continues. “I tried to make a record that captured that.”

Lukens attributes the adventurous nature of the album to producer Eno, who encouraged the band to go beyond their preconceived sonic boundaries.“What I enjoyed the most about working with Jim was that he was very experimental, that he was really into pushing the ideas we had really far,” Lukens explains. “He’s really responsible for pushing a lot of the songs way past where they began. There’s a song on the album called ‘Never Understood,’ written on piano and it sounded like a Jackson Browne song. Jim’s first thought was ‘How do we do this without the piano?’ and I was like ‘What? How can you get rid of the piano? That’s the whole song!’” he recalls with a laugh. “He had a novel approach, and it was awesome. If I was apprehensive about something, he’d be like, ‘Oh don’t worry, I’ll only charge you half!’” he says with a laugh. “He took away the worries. In some way, feeling like you may fail is a big part of being experimental, and I loved that.”