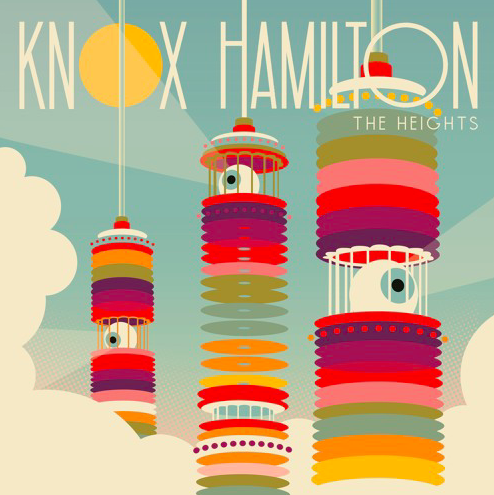 If The Beatles were correct and all we really need is love, then The Heights, the long-awaited and much-anticipated debut album from Arkansas-based pop rock outfit Knox Hamilton, is the cure for what ails you.

At 13 songs strong, the album’s offerings are sweet but never saccharine, and showcase frontman Boots Copeland’s nicely-honed lyric-crafting sensibilities. The album features the band’s ubiquitous single, “Washed Up Together,” a castaway daydream of anthemic proportions, and gives a permanent home to “Work It Out,” that celebration of conflict resolution that started it all—the song that tickled the ears of yours truly, made me turn up the radio and listen closely, again and again. The band also pays homage to their pop progenitors, giving an electrified 21st century makeover to old gold standard “Never My Love,” originally made famous by The Association in the late 1960s.

“I don’t just keep the pictures you’re smiling in,” Boots quips in “Rightfully So,” a dance-y testament of unending allegiance, and a definite finalist for the album’s earworm award. The group unleashes their inner hair band, taking us to the sexy Sunset Strip with the rowdy rock of “Back Porch”—hairspray and eyeliner not included. After thoroughly feeding our souls and scratching our fun-seeking itches during the first 12 tunes, the title track and album closer, “The Heights,” is its crowning achievement. Knox Hamilton strips away the synth and begins with an acoustic guitar and Boots’ lone, beautiful tenor. “All of your faults, lay them at my feet, I want to walk with you darling,” he sings, pledging heart-clutching, swoon-worthy devotion to his love; “I don’t want to get used to not having you around,” he continues, as this song literally incites a physical reaction of longing, making this writer’s heart yearn and ache, its frill-free, simple arrangement is a testament to Knox Hamilton’s talent and staying power.

A lovely debut effort from Knox Hamilton,The Heights is a delicious mix of classic indie-style three-chord bangers and shimmery synth-infused pop, a pregame soundtrack to accompany those sure-fire hot summer road trips with the windows down and the stereo cranked. Don’t miss this one.