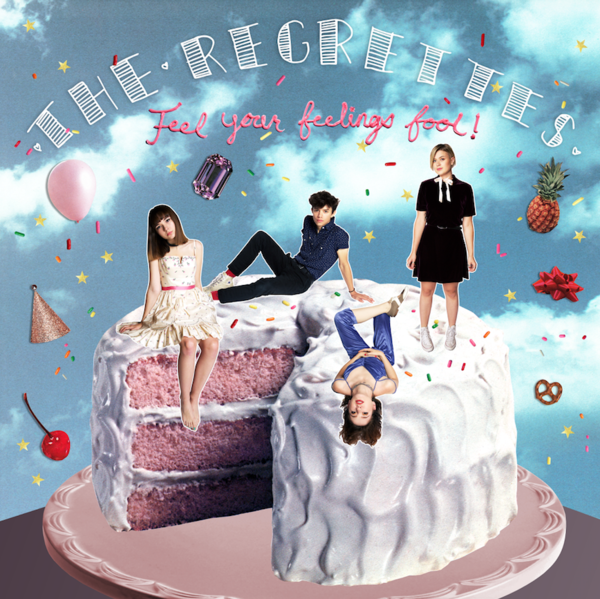 “Be soft, be shy, read a book, and learn to cook/Be nice, be dumb, clean the floors, and wash your pores/Be light, be small, wear a dress below your knees, not less/Be insecure, be a wife, cater to a man for the rest of your life,” sings Lydia Night, outspoken frontwoman of Los Angeles punk-centric rock outfit The Regrettes, in “LadylikeWHATTA BITCH,” a balls-to-the-wall assault on feminine stereotypes from the band’s debut album, Feel Your Feelings Fool!, out January 13th via Warner Brothers Records.

The Regrettes offer their own 21st century challenge to the age-old theory of the feminine mystique in most of the songs on the album, but do something unique–the band makes feminism, wait for it…accessible to everyone. The appropriately-titled album holds nothing back, and leaves little room for guessing—and that is utterly refreshing. In 60s-inspired doowap-esque “A Living Human Girl,” Night schools the listener about being a girl—“I’ve got pimples on my face and grease in my hair and prickly legs, go ahead and stare…sometimes I’m pretty and sometimes I’m not,” she snarls as she speaks the truth, and adds “I’m still gonna be here, even after your best shot.”  On album standout “Seashore,” another 60s-inspired tune, Night sweetly rails against a patronizing antagonist, calls out his meanness as a sign of weakness, and assures that she can kick his ass even in her skirt.

In high energy bangers “Hey Now,” “Juicebox Baby” (which could either be an ode to a lover or to an actual juicebox) and my favorite, “Til Tomorrow,” the band explores flirtation and those butterfly-jittery “I like you” feelings that perked up my doe-eyed inner 16 year old, while songs like “Picture Perfect” (which pays head-banging homage to “Push It” by first ladies of hip hop Salt-N-Pepa) and “Bronze” relay ideas of cool-girl envy and sadness over friendships lost to shifts in popularity.  Though I could spend hours opining on the lyrical honesty and substantive fabulousness of this dazzling debut, I would be remiss if I didn’t emphasize the fact that Night can sing, and Genessa Gariano (guitar), Sage Chavis (bass), and Maxx Morando (drums) can shred. Believe it. From this child of the 90s who looked to bands like Garbage, Hole, and Veruca Salt for musical role model material, Feel Your Feelings Fool! scratches all those rock n’ roll itches.

2 thoughts on “ALBUM REVIEW: “FEEL YOUR FEELINGS FOOL!” by THE REGRETTES”