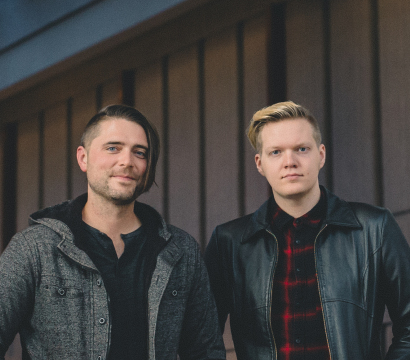 Atlanta-based pop duo Paper Lights, makers of “adventure music,” released Great Escapes, their debut full-length in March 2016; today they unleash a deluxe version of the album, featuring their arena-sized anthems along with several remixes by contributing artists. Uniquely, their cinematic sound finds its home on the stage and on the screen; the band has shared bills with Allen Stone, The Fray and Miike Snow, and has provided the sonic backdrop in commercials for companies like Coca-Cola, Land Rover, Boeing, MTV, ESPN, Chick-fil-a, and Outdoor Magazine.

“Growing up, I really loved movie soundtracks, and instead of listening to rock albums, I listened to composers’ albums. I was in my room blasting John Williams. I was a weird kid,” laughs frontman Dan Snyder. “I played and studied music growing up, but had given up on pursuing it; at 25 years old, I was an armored car driver for Loomis Fargo, and I was like ‘what the heck am I doing with my life?’,” he continues. “It was dangerous, I hated it, there was the risk of being shot every day when I was working. Music had always held a special place in my life; I convinced my wife, who has an awful lot of patience, to move from east Tennessee to Atlanta, where we knew no one. It was really weird for a couple of years, but it worked itself out.”

Upon relocating, Snyder reached out to find collaborators, which was not an easy task initially. “A lot of us are transplants, and the people who are originally from here all kind of have their own thing going,” he recalls. “It felt difficult to collaborate, but I was on a mission to fix that.” And fix it he did. “In 2012, I was really itching to do something with other musicians. Originally, it was a bunch of us in a cabin playing around; we came out with an EP, though it was never meant to be a band or anything. We put it online, and it started getting placements for film and television; that piqued my interest and I got really excited about the idea of being a composer,” Snyder says. “Eventually, I realized I didn’t love being in the studio all the time, that I enjoyed performing live. It’s been a progression; my friend Josh Stewart really grabbed onto the idea and it’s been him and me for last few years.”

Stewart shared Snyder’s love of soundtracks and composing, and Paper Lights’ cinematic sound was born. The pair toured the country extensively for the majority of 2016, and has plans to hit the road again in February, traveling throughout the southeast and Texas. They’re also working on their next atmospheric album with a little help from the National Parks Service. “We’re tracking our next record from a mobile studio in a bunch of the parks,” reveals Snyder with a twinkle in the tone of his voice. “I really wanted to get out of the studio; environment plays a key role in our inspiration, and we wanted to try something unconventional. When I lived in the country in east Tennessee, I really didn’t appreciate the outdoors. Living in the city for a few years has made me find any excuse to be outdoors in a park somewhere. We can’t wait.”