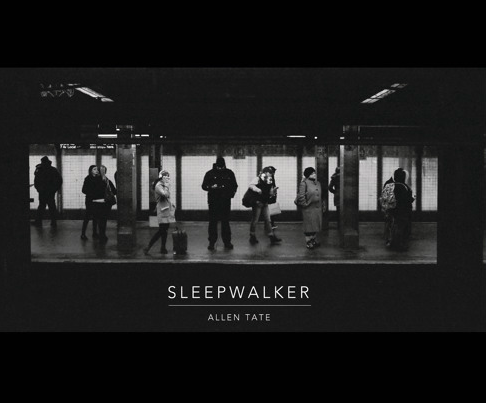 In order to craft the songs on his solo debut, Brooklyn-based musician Allen Tate spent several weeks alone in Copenhagen, inspired by its minimalism and its effortless beauty. This quiet period of solitude echoes strongly throughout the entire album, allowing Tate to create his own brand of effortless beauty.

This fact is readily displayed In opening track “Aliens”, as Tate sings, “I think I might be different now/I think I’ve changed”. The a cappella introduction of his deep baritone is as unsettling as it is soothing; ominously understated synth-y ambiance hovers in the background, giving way to sporadically-placed snare shots and buzzy guitar licks, before all elements convene to round out the song. In stark contrast, the sound of the next track, aptly-named “Being Alone”, is warm and inviting with an infectious groove, the depth of Tate’s timbre countered with well-placed low end brass. “Go when you hear the call/Fly out, they’ll shoot you down”, he reflects on love in this album standout inspired by watching geese on a picturesque lake in the city.

While it’s obvious that these songs were born from deep thought, they aren’t self-important or pretentious; Tate has fun with us, and it’s evident in tracks like “Don’t Choke”, as he examines this time in his life and his new venture. “How do I know when the dream is over/Hopes are high and lights are dim/I wouldn’t know the familiar faces/The future’s eaten all my friends”, he sings in the verse, leading into a call-and-response chorus of celestial vocals singing “You’re gonna be great…don’t choke”, like an angelic pep talk, before looking for young, numb, dumb, fun amidst the easy groove and    bass-centric synth riffs in “YNDF”.

There’s no misstep on this album; besides the fact that Tate’s goosebump-inducing voice makes my ears tingle, the skillful musicianship on each song is noteworthy, and gives every track a unique identity without ever sounding forced or inauthentic. Sleepwalker is a shining debut.