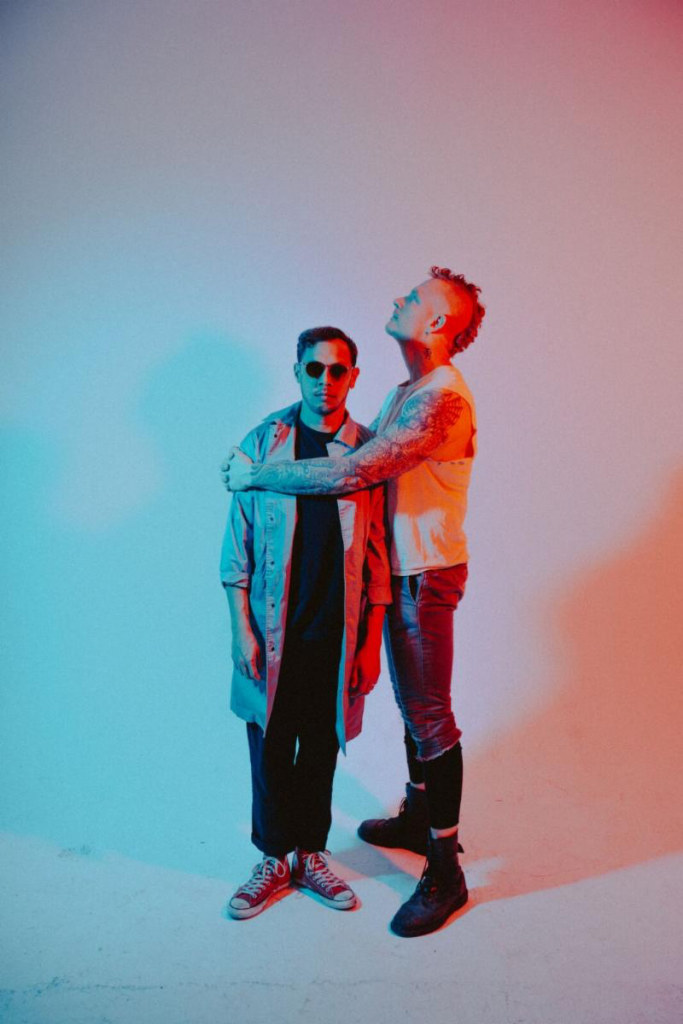 In a refreshing left turn from their well-trodden respective paths, Max Collins, well-known as the vocalist of Eve 6, and Kenny Carkeet, former keyboardist for AWOLNATION, have joined forces to create FITNESS, the vehicle for their own unique blend of alt-rock and aggressive synth-pop. After a chance meeting at a 2012 festival in upstate New York, the pair surrendered to destiny, and it all began with a t-shirt.

“He was wearing an Ol’ Dirty Bastard shirt that I had, and that convinced me to say hello,” says Collins of his creative partner with a laugh. “We watched Public Enemy from the side of the stage, that was cool. We hung out the rest of the day and exchanged numbers. We’re both LA guys; we started kind of collaborating on some production stuff together for other artists, writing stuff for other artists, on and off for a couple years. In early 2016, maybe 2015, Kenny was like,’ Man I need to do my own thing,’ where he could be unhindered by anyone else’s expectations or direction or anything,” Collins recalls. “That spoke to me, I could relate to that sentiment.”

Carkeet made an instrumental track and shared it with Collins; “It blew me away,” Collins says. “I didn’t have a name for what it was, it just sounded like something wholly new. I implored him to let me write on it, and we had such a good time doing it, throwing aside everything that, I guess, you sometimes need when you’re wearing a professional hat and helping someone else to make their music. We were able to do what we wanted in the moment and not overthink it, but just completely go by instinct,” he adds. “That was our first foray into this, really doing it just for the exercise.”

“I’ve never met anyone like Kenny; he’s an impossible juxtaposition of characteristics that just don’t often go together, maybe shouldn’t go together, but they do, and do well for him,” Collins comments of what makes the pair’s relationship work. “His head is in the clouds and his feet are on the ground. He’s one of the most hard-working people I’ve ever known and is a total dreamer at the same time. He has inextinguishable energy and enthusiasm, and he’s incapable of a dishonest moment musically.

I couldn’t do this alone,” he says. “It’s very much greater than the sum of its parts.”

After posting their work online, they were met with an overwhelming reaction of support, which served as the catalyst to create more. “We started writing feverishly whenever we weren’t preoccupied with something else, and then we started just making time for FITNESS as a primary thing because we were enjoying it so much,” Collins continues. “Kenny was still touring with AWOLNATION, so he was sending me tracks, I was recording vocals at a studio in LA, sending them back to him, and he’d work on it. When he left AWOL about a year ago, we started hooking up every day in the studio and writing a bunch of material.” Those writing sessions culminated in the band’sAggrocultureEP, and their recently-released full-length album Karate.

“We started to amass a pretty significant catalog of songs; we called the record done a few times before we had the actual version that came out, but we just kept writing,” he laughs. “It’s really fun. Doing this tour–not in a 12-passenger van but in a minivan–there are mingled feelings of nostalgia because it’s bringing me back to my late teens early 20s when I did this kind of thing for the first time. We’re doing something that’s starting to make an impact on a small scale, doing something that I love. The contaminants haven’t gotten in, it’s gratifying,” he continues. “Having been in a band that was on a major label, at the tail end of what was the heyday for those companies, it was easy for me to kind of lose my way in that, lose the feeling of who I am and what I want to be doing, and get sidetracked by the things that really shouldn’t matter–i.e., the ‘right people’ liking the music, and starting to write for the wrong reasons, for results rather than do it to look for truth,” he adds. “I don’t blame anyone else for that. I was totally complicit in that disillusionment of myself. But it’s definitely an impediment to creativity or at least doing anything worthwhile.” Now, with their debut under their proverbial belts, songs in radio rotation around the country, and just-announced SiriusXM ALT Nation Tour with Big Data and Castlecomer kicking off in October, their collective star is on the rise. “In FITNESS, Kenny and I have both found that ‘thing’ again. It’s our maxim to preserve that; the cool stuff that happens along the way is great, but the only reason the cool stuff is happening is because we’re being true to that ‘thing,’” says Collins. “We’re finding the joy in our art.”