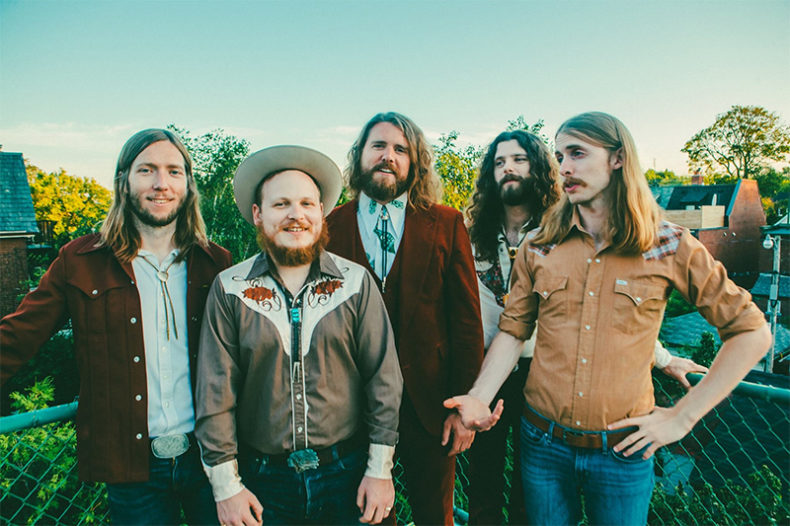 Fourteen years ago, newly graduated friends in Saskatchewan were trying to figure out what to do with their lives; none had ever formally played in a band before, but they decided to play music together. “We lived in the middle of nowhere and we wanted to break things off and experience new things,” says Ryan Gullen, bassist of what was to become rock n’ roll powerhouse The Sheepdogs. Playing covers evolved into writing and recording original tunes. “We started touring and learning about the ways of touring, and used it as a way to get out of where we’re from, traveling across Canada.”

In 2010, Gullen got a life-changing call from Rolling Stone Magazine; “They had discovered our music online and they wanted to spotlight unsigned bands,” he recalls. “We were the only non-American band. The picked us for this sort of competition to be on the cover of Rolling Stone. I was sitting in a car, driving between appointments and I got this call from somebody in New York from the Rolling Stone office–a bit of a shock.” The band, with the rallying support of their country, won the competition, and their career catapulted as they became the first unsigned band to grace the cover of Rolling Stone.

“We were all working multiple jobs; we’d quit our jobs to go on tour and then come back and kind of re-evaluate,” Gullen continues. “We went from being this band playing old rock n’ roll music from Saskatoon to being on the radio and having number one songs Canada, playing festivals, coming down to the States, going to Europe and all these things. We realized that once you’ve done that, you can’t just put your feet up and start raking in the bucks,” he adds. “It gave us an opportunity to really focus on music. We had out a bunch of records before and we’ve put out a bunch of records since then. We just to try to continue to grow as a band.  Our mantra has always been ‘you make the music that you like and that you want to make, and then you hope there are other people out there that also like that music. The more we’ve traveled we’ve discovered that not everybody wants to just listen to  Diplo or Drake,” he says with a laugh. “There are people out there that still like rock n’ roll music.”

In keeping with their mission to make rock n’ roll like it used to be made, the band released their latest album Changing Colours in February via Dine Alone Records. “The last couple of records we’ve produced ourselves and not for any reason other than that we’ve always been very comfortable in what we do, more so now because we’ve been a band for a long time,” he explains. “We know where we stand and what we’re trying to do.” While previous releases were typically turned around in a short period of time, The Sheepdogs took their time with Changing Colours, which allowed them to experiment and add elements like pedal steel to their classic rock sound. “It was really neat to sit with the songs or try different things,” Gullen says. “We were able to see these songs totally evolve. The term color–you get the outline of a song, the drums, the bass guitar, the melodies, the lyrics and then after that it’s all about adding color; we got to do that with this record because we sat with the songs for so long. The idea of Changing Colours was that each song, because each was worked on over a period of time, took on a different life and had different colors to it. When it came to look at the record as a whole, first off we’re like, ‘oh my God this is a lot of songs,’” he laughs of the album’s 17 tracks. “But second, there were a lot of different vibes and moods that came out. We’ve always been fans of bands from the Southern United States or even British bands that would emulate those bands from the Southern United States, so we got introduce a lot of those elements and pay homage to that.”

The Sheepdogs are currently on tour support the album’s release and will perform at Nashville’s 3rd & Lindsley on Sunday, July 22nd. “As a musician, you get to do all these cool things, meet cool people, and go to these cool cities. You often get lost in the idea of the future rather than enjoying the present,” he reflects on the band’s 14 years together. ”You spend so much time always thinking about what the next thing is, whether it’s what your next record is what your next show is, what your next meal is, and you don’t really spend a lot of time focusing on the moment.  I think we’ve gotten better about that as we’ve gotten older and as we’ve done more things. If I could, I’d go back and tell myself that the future comes regardless,” he remarks of what he would tell his younger self. “You need to enjoy the stuff that you’re doing. I’d tell myself to enjoy the moment, enjoy playing the new song that people are really excited about and enjoy being in that moment.”