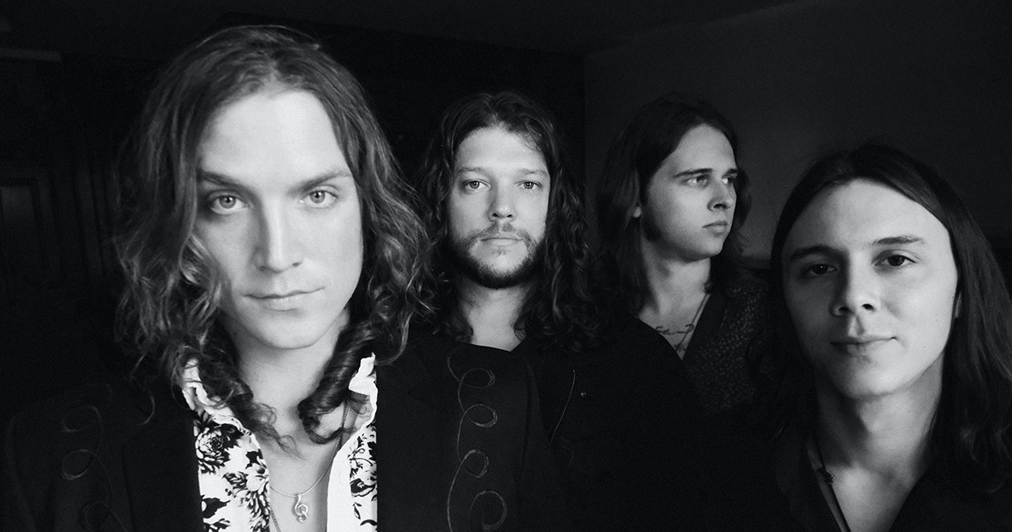 With its eleven powerful tracks that pay tribute to the swampy southern blues of their origin, edged with gut-punching rock n’ roll, mostly Mississippi-based outfit Bishop Gunn’s new album Natchez, named for their hometown, represents the sound of the South as they know it. The band is made of Natchez sons Travis McCready (lead vocals), Burne Sharp (drums), and Ben Lewis (bass) who share living space with a single bathroom in a farmhouse in Leiper’s Fork, Tennesse, rounded out by Nashville-based Drew Smithers (guitar), who was like a long-lost brother the moment they met. Bishop Gunn, with their beautiful manes of hair and a name plucked from a tombstone in their town’s historic cemetery, has been tearing up the highways touring in support of the record; we caught up with them recently, and they graciously indulged us with an informative round of word association:

“The other end of the Trace,” McCready says. “My childhood home is a mile from the end of the Trace, and the house we live in here is about two miles from the Trace. That’s another reason why Natchez is still so relevant whether we live there or not. It’s like we just moved up the road.”

“It’s growing,” says Lewis of their hometown scene, which is generally a covers culture due to tourism, much like Nashville’s Lower Broadway honky-tonk strip. “It’s kind of dwindled in the last decade, but there’s music there every day of the week,” reveals McCready. “Burne has set up a studio there, and we’ve been on a mission trying to inspire people to think bigger there and make their own music.  We want everybody to make their own brand, to represent Natchez with their own creativity instead of someone else’s. In the last couple of years, people have been trying to make different festivals throughout the year. This year, we’re doing Bishop Gunn’s Crawfish Boil there, it’s our first one, and we’re hoping to do it annually.  We’re definitely working on the music scene and the economy down there.”

“A lot of them,” laughs Sharp. “My wife!” says Smithers, who lives close to the band’s house in Leiper’s Fork. “If we’re not in the house together, we’re in a van together, or in a hotel room together, or on stage together,” adds McCready. “It’s 24/7, and we’re always on the same mission.” “Whenever we go back to Natchez it’s funny because everybody lives in different places. The phone will ring and it’s Travis and he’ll be like ‘What’re you doin’ man? Wanna come over? I’m cooking some food,’” laughs Lewis. “And then before you know it, we’re all back in the same house.”

“In our small town, we had a classic rock station and a country station,” McCready recalls. “We realized, it was all influenced by what was basically in our own backyard. “If you keep tracing music back, a lot of it comes right back to Mississippi,” Lewis adds. “I’m the only one that actually didn’t grow up in Natchez but I grew up listening to all that music coming out of there–Delta blues, Son House, all those guys were a big part of me wanting to play guitar,” Smithers reveals. “You don’t really appreciate your hometown until you leave for a while,” Sharp continues. “We didn’t realize we were in the middle of the origins of all of it. We went away. and looked back and realized that it’s all there.”

“Hotel shampoo,” says McCready. “I get up first so it’s usually all gone before anyone else gets up.” “Clogged drains!” laughs Lewis. “Which reminds me, this interview is brought to you by our local sponsor, Drano.”

“Authenticity,” says Lewis. “We want to lift Natchez up, that’s the whole point. To bring people’s attention to that culture and that place down there because it’s just a special place. It’s well known, but it’s kind of our best-kept secret in Mississippi, it’s just such a cool place. You can dig as deep as you want to and there’s always something interesting.” “History,” adds McCready. “We want people to know the history of where our music comes from. If we could draw people into liking this, it could be a gateway to keep the history alive that influenced it.”