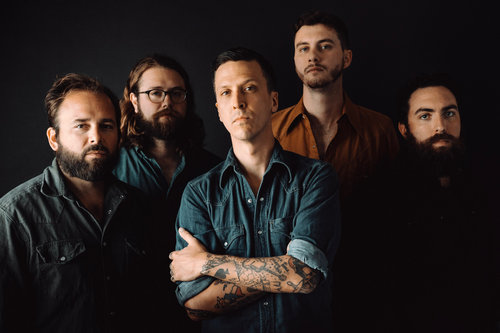 Today, American Aquarium released their new album, Things Change, an aptly-titled stunner; a year ago, the band’s world was upended, and frontman BJ Barham was at a crossroads when his entire band decided to leave.

“I’ve always had a rotation, tumultuous would be the word to describe my band situation,” laughs the native North Carolinian in his familiar accent. “Since 2006, I’ve had over 30 members, but I never had a mass exodus of people, never had like a ‘cleaning house.’ Some of them had been with me for eight or nine years, and let me know they didn’t want to play music with me anymore,” he reveals. “It was hard. At first, it was very much ‘Woe is me, what am I gonna do?’ I was feeling sorry for myself. I was in a dark place for about two weeks and then my wife told me ‘You can either bitch about it or you can change it.’ I went out and I found a new band. We rehearsed and it was like falling in love with playing music all over again,” he adds. “It really recharged me creatively.”

Barham, whose critically-acclaimed solo album Rockingham was created in the fall of 2015 and released in the summer of 2016, had written nothing in the last two years. “I was in kind of a creative wasteland of negativity,” he recalls. “The environment I was in was not conducive to creating things. And I didn’t, and they quit, and I questioned a lot of things–whether or not I was supposed to be a songwriter, whether or not I should keep the band going.” But for master storyteller Barham who was born to make music, what else could he do?

“The options weren’t good,” he laughs. “I’m a really shitty waiter and an even worse bartender. I knew that I would always write songs; this is really the only thing I’d ever been good at, the only thing I’d tried and succeeded at. Usually, it had just been utter failure and barely getting by, and this is the first time where I’d actually felt like I’d found my place and purpose,” he explains. “Writing and performing centers me in a way that nothing else has in my lifetime. So I don’t think it was a question of if I was going to continue, it was more a question of whether I was going to continue using the vessel of American Aquarium as the delivery for the songwriting. When I got this new band, it was like somebody walked over to the water spigot and turned it back on,” he adds. ”Within a month, I had the new record written.”

Barham writes from an autobiographical perspective for American Aquarium, exposing personal wounds struggles, and baring his soul. “As soon as I started writing this record, I realized that I still had a lot to say about my personal life, about things that I’m observing in the world. That’s why I did it,” he says of his decision to keep American Aquarium alive. In Things Change, Barham touches on the political, and admits that it’s ruffled a few feathers. “I get a lot of that ‘Shut up and sing! Keep politics out of it! I don’t pay for your opinion!’ And my response to them is that you can’t tell me to be completely raw and honest about my relationships, my demons, the road, and then just ignore what’s going on in the world today,” he explains. “I was like ‘If you want unfiltered BJ, you’re getting him in every sense of the word.’ I don’t mind people disagreeing with me because I welcome discussion and debate. That’s how we get to know each other. That’s how we come to a common ground. This country used to be really good at discussion, but somehow we removed respect from discussion and that became argument. Now this country just wants to have arguments with each other. That’s not how we’re gonna fix this fracture in the country,” he says. “I’m 34 years old, and in my lifetime, I’ve never seen this amount of hate surround around a campaign or an election. It brought out parts of our country that I’m ashamed of, it brought parts of the South and I’m ashamed of and that I really thought we were past in 2018. So this is just me observing, writing down how I feel. There are going to be a lot of people that disagree with me, but I hope that everybody can at least respect me for articulating it. The only way you’re going to even get someone to think is by discussion, by talking about it, relaying the facts, relaying your side of the table. I don’t think everyone who voted for Trump is a bigoted misogynistic hatemonger. There’s a very small minority of his constituents that feel that way, but I think most people were just really tired of the right ignoring them and the left ignoring them and here comes this wild card spouting off of everything that they want, everything that their families have lost over last 20 years,” he continues. “I don’t agree with it, but I totally see how they fell for it. I would’ve fallen for it too. It’s a weird situation; now everyone’s starting to see the coal jobs aren’t coming back and there’s not going to be a wall to keep out ‘the alien immigrants,’” he says. “It was snake oil, a used car that turned out to be a lemon, empty promises.”

American Aquarium is now on tour supporting the release of Things Change, which will bring him to The Basement East in Nashville on June 5th. Barham isn’t too worried about the challenge of winning fans over with the new lineup. “These guys are lifers, the kind of guys who’ve played music the last decade with different bands. Everybody’s a seasoned pro,” he says. ”That was the biggest worry going into it; American Aquarium is very much a family thing, When you come to see us you’re part of the family, When you get rid of most of the family, it was like I was bringing five new girlfriends to the family reunion,” he laughs. “There was that ‘What happened to the old ones? We like the old ones. What did you do? How did you mess this up this life?’ It was exactly like convincing like your gossipy aunt that this new girlfriend is better and if not better in general terms, it’s better for you as a person. This band brings such a new energy to things. There’s no question that I made the right decision to keep going. I feel like I’m a 21-year-old kid starting the band again,” he adds. “It’s a really good feeling.”