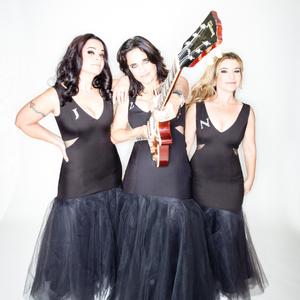 It’s been said that a mediocre teacher tells, a good teacher explains, a superior teacher demonstrates, and a great teacher inspires. Meet No Small Children, an alt-rock trio from Los Angeles, who definitely fall into the latter category—by night, they wield their guitars and shoot out searing riffs, but by day, the three are molding young minds in the classroom, and inspiring the next generation of movers and shakers by being living examples of what is possible.

In 2012, guitarist Lisa Pimentel and drummer Nicola Berlinsky were sharing recess duty; the pair had worked together for a long time and supported each other’s musical endeavors. “We were chatting and discovered we were feeling the same way about some things, and craving a space to go in and write some music about things we were experiencing,” explains Nicola. “We decided on that day to play some music together, with the intention of just having fun–although before we ever played we had a band name and dresses picked out,” she laughs. “Within three months we were on tour. Then Joanie moved from Boston and joined us on bass, and we just kept going. We all three work at the same school and our schedules line up beautifully. It’s great.”

In 2017, No Small Children released a new single – “Radio” produced by the legendary Bob Marlette (Rob Zombie, Black Sabbath, Filter, and more), which has been featured on The World Famous KROQ, Los Angeles, Rock Band Rivals video game and in the 2018 season of the Drew Barrymore Netflix show, “Santa Clarita Diet.”  The band’s remake of the classic Ghostbusters theme song can be heard in the new 2016 Ghostbusters movie, and which RCA Records officially released as a single.

They recently celebrated the release of a new album, What Do The Kids Say. The record features on a particularly poignant tune, “I’m So Concerned,” which came out around the time of the Parkland shooting. “We started writing the song a few months back,” says Joanie. “It started with just the idea of being a schoolteacher and constantly having to reinvent yourself and evolve because the kids change depending on what’s going on in their lives. Right now, we’ve got these populations of children that are being raised on all these trickle-down messages from the top of the food chain, from politics and watching movies, and porn is an issue, it’s just everything,” she says. “The whole world is telling them to be one way and we’re trying to promote goodness and kindness and responsibility. It’s not about being critical of the kids, it was meant to be like a ‘state of the classroom,’ us just looking at ourselves and trying to evolve as teachers and giving a true account about what real teachers in real classrooms see on a day-to-day basis,” she adds. “It’s about gun control, but it’s a lot more than that. A lot of these teachers are the only ones holding things together and may be the only lifeline to a lot of these kids. It’s really kind of a desperate situation.” In Los Angeles, a city with one of the highest rates of homelessness in the country–a number which includes children—student and teacher walkouts due to rat infestations, school shootings, and high instances of poverty, there is a lot to cause concern. “But as dire as it is, the kids are so full of life and hope,” says Nicola. “It’s just really important to take stock of where we are.”

In the beginning, the band tried to compartmentalize and keep their day jobs and side gigs separate, but they realized there was a teaching opportunity lost in the process. “We’re very protective of our relationship with the kids, but, as time went on, some of the parents started to come across our music and would come to the shows, tape us with their phones, and their kids would come to school wearing our merch the next day,” laughs Joanie. “Joking aside, we encourage the kids all the time to take risks and to put themselves out there and just work hard and do all that and we thought it was a good teaching tool to share with them that we’re doing the same thing. We’re talking the talk and walking the walk. It’s not like we just view teaching as our day job. We are passionate about teaching and passionate about our music. Both roles, as exhausting as they can be at times, feed one another,” she explains. For example, each lesson taught in the classroom is like putting on a show—for an entire day, in an attempt to keep the attention of up to 40 kids at a time. “The music makes us better teachers,” she adds. “And teaching makes us better musicians.”