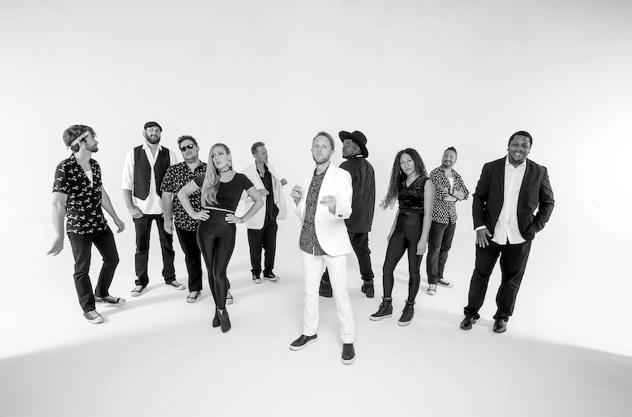 ”I am literally folding t-shirts,” says Ryan Harkrider, frontman of 10-piece Austin-based alt-soul outfit The Nightowls. The band was gearing up to begin touring in support of the release of their latest album, We Are The Nightowls, out on April 27th.“We travel in this big RV. I picked it up this morning and drove it across town and I’m scrambling as always, you know, a normal morning,” he laughs. It’s not easy to haul a 10-piece band (11 if you could their sound guy) and all their gear around the country and an RV seems like the perfect option.

“It’s kind of all of the things, It’s fun. It’s exciting. It’s definitely one of the long-running jokes that it gets stinky,” he says with a laugh about their chosen mode of transportation. “Everybody brings what we call ‘spritz’ and everybody is always spraying the bathroom and each other and armpits and all sorts of body parts. We want to make it a challenge,” he jokes. “We get hotel rooms, but some people sleep in it, it does sleep eight. It’s a nice big RV, it does the trick. There aren’t a whole lot of options for 11 people on the road, so we do what we can do?”

Feeding 11 people who have varying tastes and dietary restrictions can be a daunting task, but Harkrider says they’ve got it down to a science. “There’s a fridge in the RV, and I stock it with breakfast and lunch foods,” he explains. “We have two vegans in the crew, so our singer Sarah, who’s also our tour manager, handles the groceries. We’ve got a nice little system.”

Six and a half years ago, Harkrider, who grew up on a steady diet of soul and R&B—and learned to sing while listening to it—started the project. “Ten years ago. I was singing in another soul band for the first time and I fell in love with it. I’m a songwriter, and I just started writing songs for a 10-piece group,” he recalls. “Those first couple of years were spent being a band nobody knew about because we were just like in my garage goofing around,” he laughs. “We finally made our first record and hustled, played a bunch of shows. I’m a choir and theater kid; I grew up playing in bands. The Nightowls incorporates all of the things that I love–songwriting, singing, dancing, arranging for horns, it just kind of exercises all of my muscles,” he continues. “I also like to be busy.”

While the lineup has changed significantly over the years due to members relocating, taking new jobs, amongst other various life changes, Harkrider says in hindsight, what was a daunting challenge became an exciting experience.“There’s such a great music scene here in Austin, there’s always somebody waiting in the wings ready to fill in, jumping in this craziness,” he reveals. “It was kind of a panicking moment, as you can imagine, trying to keep the business afloat.  It’s been an interesting couple years. At first, I was scared but realized pretty quickly that I’d done this before and it was going to be fine. You start seeing all of the positive things that can come from bringing new blood and new people and new talents into the band,” he continues. “This record is a real testament to what we can do together and we’re just so proud of it.”

The Nightowls will roll the RV into the Music City on May 22nd for a show at local hang The 5 Spot. “Being from Austin, it’s always fun to be in another music town,” he says of their upcoming stop. “Nashville is very similar to Austin, but it’s also completely different. It’s always fun to be in a room of people that understand music,” he adds. “It’s nice to be able to just walk in and share that with people pretty quickly.”