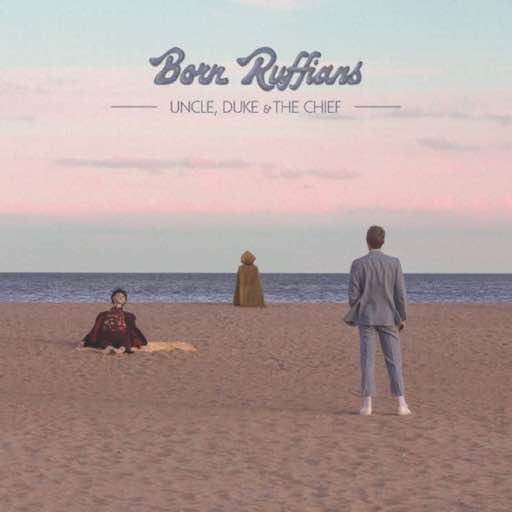 From beginning to end, there is something familiar—almost comfortingly so—about Uncle, Duke & the Chief, the latest offering from Toronto-based rockers Born Ruffians. The band may be returning to its original trio form for the first time since its 2015 album, Birthmarks, but there is no mistaking the Ruffians’ sound. Bursting with acoustic guitar riffs and featuring hooky vocals that often contrast with the upbeat feeling of those riffs, the Ruffians have put together a stylistic chameleon of an album that blends in well with the closer-than-ever sounds of today’s indie, Americana, and folk-rock genres.

Every song feels like it could have been recorded in a concert hall, any of the retro studios that are being reborn throughout the world, or years ago in venues that could not avoid the wrecking balls of “progress.”   The album has an open, church-acoustics sound which provides a framework that gives the band space to construct an expansive and more dramatic audio setting for each song.

Many of the tunes boast upbeat, attention-grabbing, head-nodding rhythms. “Miss You” roars to a start with dramatic call and response harmonies over furious acoustic guitar. It then yields to a bubble-gum electric guitar riff and drum beat that is a blast from a 1960’s diner.  The song is a prime example of the oft-contrasting lyrical and musical moods on Uncle, Duke & Chief—on the surface a song of lost love; deeper, you can feel the egotistical melodrama that is likely the reason the love is no more. “Fade to Black” is the most high-energy song on the album and follows closest to the band’s prior post-punk offerings, blending a Ramones-esque backbeat with bouncy indie-pop vocal delivery, and even a touch of synth.

While many of the songs have a two-latte buzz, the Ruffians like to use contrasting tempos to add depth to the collective works on Uncle, Duke, & The Chief.  “Love Too Soon” provides the starkest contrast, and quickly became a personal favorite from the album. While minimal electric guitar plucks, whistling, organ, and tambourine create a gentle, hauntingly beautiful landscape, the lyrics tell a melancholic tale of lonesomeness and hurt—with just a touch of repressed venom for those able to find love.  The song’s emotional punch comes from the aching, slightly broken, vocal delivery by Ruffian’s frontman Luke Lalonde. Likewise, “Forget Me” offers a straight-from-the-60’s, handclap-led, doo wop-paced feel.  With an aching and purposely strained vocal inflection mixed with a retro sound, it’s a modern indie song lost in a time warp that makes you think about what the Flaming Lips would have sounded like at the original Woodstock.

It’s in the contrasts and the lyrical and vocal subtleties that you pick up on the true depth of what the Born Ruffians have built with their new album. It’s in the nods to a variety of our favorite stylistic influences that the album has an immediate familiarity.  Uncle, Duke & The Chief features an ageless sound that you can spin while floating in an idle daydream, washing away the scars of the work week, or enduring (or maybe embracing) a bout of existential angst.

[This review was handcrafted with care by Eo8’s own George Maifair.]