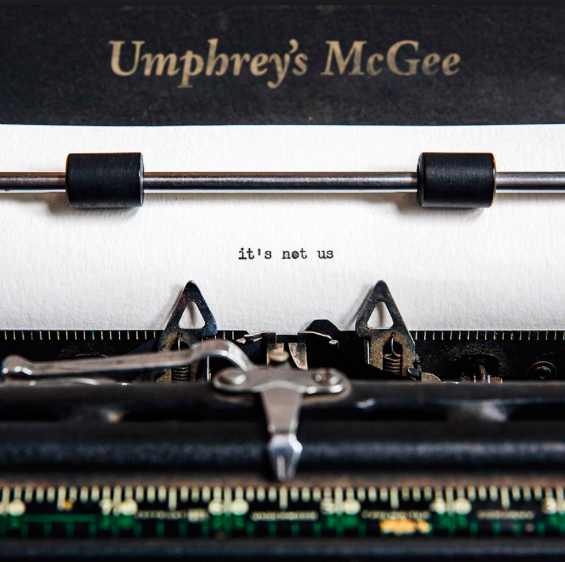 After an aggressive touring year in 2017, Umphrey’s McGee is ready to hit the road again in 2018 in support of their 11th studio offering, it’s not us. The Chicago-based six-piece delivers 11 dynamic genre-spanning fan-pleasers–fresh debuts along with several tracks that have already had the concert treatment.

Jake Cinninger and Brendan Bayliss dazzle with metal-sized guitar work supported by keyboardist Joel Cummings’ vibey, pulsating synth; Andy Farag and Kris Myers lend their percussive genius to the rhythm section, accompanied by Ryan Stasik’s signature bombastic bass. Introductory drum beats on recent single “Looks” bring on instant anticipation as Cinninger lends modified vocals with some sinister lyrics: “Saw you last night standing in front of the window/Don’t break the glass/Searching your signs and symbols/The mirror you broke in half.” The chirpy instrumental chorus of “Whistle Kids” grabs primed ears while the music blends together into a pool of deep blues. Bayliss’ words recount a painful hangover loaded with consequences: “If I learned a thing from past mistakes, then why did I stay out so late/When morning comes screaming through the door.” “Remind Me” shimmers, and provides the album’s best example of the band’s unique live sound. The longest track begins with a jazzy funkbeat and transforms into a rocket-fuel driven banger bursting with rowdy guitar solos and booming drum rolls–head bangers rejoice!  “Speak Up” has been a regular in Umphrey’s setlists since its 2015 debut; fusion jazz-breathing saxophone trades guitar and horn solos, while energetic keys provide the bounce.

The studio allows the band to fine tune and polish their ever-evolving sound with new and old tracks alike. With intense guitar riffs, disciplined beats, and catchy yet purposeful lyrics, it’s not us gives each member of Umphrey’s McGee a chance to shine in the spotlight, and proves that intricate and mulit-faceted individuality is the secret to their collective brilliance.

[This review was handcrafted by Eo8’s own Rich Harley.]