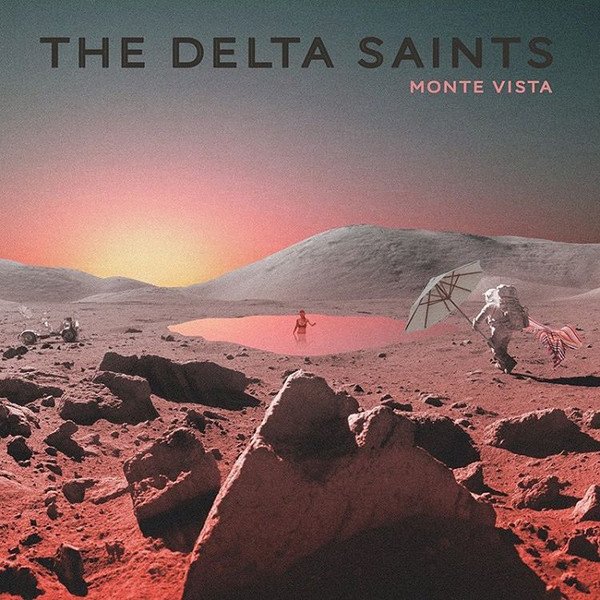 Sometimes a different perspective can have a profound influence in an album’s spirit. For The Delta Saints, the guidance of producer Eddie Spear created an evolved songwriting structure that is at the creative core of their upcoming release Monte Vista. The album still features the group’s signature blues-rock style, but with a more aggressive nod to pure alternative rock influences. The group–Ben Ringel (guitar and vocals), Dylan Fitch (guitar), David Supica (bass), and Vincent “Footz” Williams (drums)–poured over a year into creating the music and lyrics for the album and then recorded it in a whirlwind of six days, resulting in a blend of exploration and sleekness in concept, but capturing the raw essence of their artistic soul.

It would be nearly impossible not to get swept away by the upbeat, blues-tinged riffs of the album’s lead single “California,” which is so catchy that you almost have too much fun to hear the deeper longing at the song’s lyrical core. The state of California had a deep impact on the entire album as Monte Vista is a reference to the street in the Golden State where Fitch’s grandmother lives. While creating the album, the band streamed a video feed of the warm and sunny beach area as an emotional boost that ultimately helped pull the album to completion.

Not deviating far from their blues-rock foundation, the album has several funk-meets rock jams that link their prior works to their more rock-forward progression. The mud of the Mississippi delta drips from “Crows” and the reverb-filled and lyrically dark “Are You” is as haunting as a lonely, moss-covered bayou. The show-stopping, generational power-struggle anthem, “Sun God,” adds huge drums and a ripping guitar groove that feels like the best years of Soundgarden and Kings of Leon had a musical love child.

It’s clear The Saints are embracing their past while expanding as artists. Monte Vista nimbly fuses the dirty, driving, southern rock essence of The Delta Saints with their new creative maturity.

[This review was handcrafted with tender, loving care by the illustrious George Maifair. You can follow him on Twitter @georgemaifiar.]