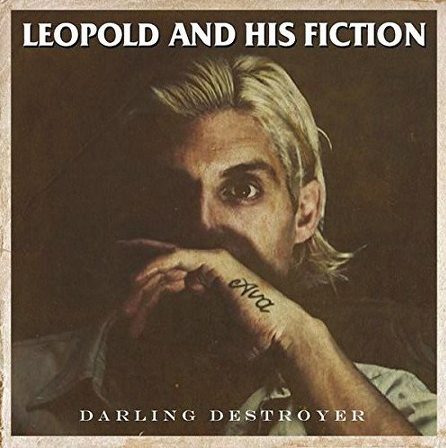 I love Austin, Texas; the best chili and Tex-Mex I’ve ever had live there, and much like Nashville, people aren’t afraid to be who they are, a mentality that provides fertile ground for creativity to freely bloom. There’s also a particular sound I’ve come to expect from Austin—while while it’s a hub for country twang and folk pop, my favorite exports from the city are the makers of gritty lo-fi garage rock. At first glance, I thought I had Austin band Leopold and his Fiction pegged as one such outfit. I was wrong.

It was an easy conclusion to make—“Cowboy,” the opening track to the band’s forthcoming album, Darling Destroyer, is a Led Zeppelin-esque bluesy fuzzed-out banger, as Daniel James Leopold bends his Robert Plant-like voice into snarls and scratchy howls. So far, so good, the second track similar with a tinge of Jefferson Airplane-style psychedelia. But then, as we are ushered into the album’s third track, the silence is broken by Leopold’s solitary voice as it bellows, “I…am alone,” before breaking into the throwback rhythm and blues that is “I’m Caving In.” Then, like an easy flip of a switch, Leopold changes the game, turning into a cape-wearing James Brown stumbling away from the microphone as he proceeds to sing his guts out.

The journey continues—from throwback soul, to that beloved garage-y grit and all the way back again, with road dust-laden rangy rambler “Ride,” brimming with acoustic guitar and pedal steel, thrown into the mix to keep the listeners on their toes. The album ends with “Boy,” a glam rock-era organ-splashed heavy-hitter that would make Iggy Pop and all the rest of The Stooges foam at the mouth. With the level of sonic exploration on this record, one thing is consistent: this band’s range and versatility are undeniable, making time spent with Leopold and His Fiction an utterly gratifying hang.