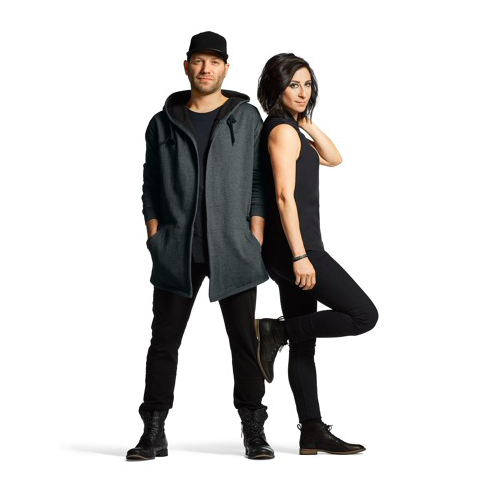 It’s hard to name a band these days, which likely explains the plethora of unique and, frankly, downright weird ones floating around the musicsphere. As band names go though, one outfit has successfully conveyed their dynamic history with their chosen two-words-pressed-into-one moniker. Meet Los Angeles-based electro-pop duo TeamMate.

“We met in our college marching band, and started dating soon after,” recalls drummer Dani Buncher of her relationship with musical partner Scott Simons. “We were together for 10 years before we broke up, but never played music together before our relationship ended. It was difficult—you’re left with a choice in a breakup, do you cut ties or do you maintain some sort of relationship? We were both of the mindset that if you have a connection with someone and there are feelings there, why would we let go of that friendship? It took some time to figure out what that meant for us and to see how the dynamic would shift.”

The pair had never been in a band together before separating, and Simons had relocated from the east coast to Los Angeles to pursue a solo music career. “I’d been doing the singer/songwriter thing out here in L.A., and I asked Dani to play with me at some shows back east before she moved here from Pittsburgh,” he recalls. “I hated being the only person on stage. It became a no-brainer—she was my closest friend, and I realized that we didn’t have to stop being in each other’s lives, and that this is what we should be doing.” So, the appropriately-namedTeamMate was born.

“I play keys and Dani plays drums; for the most part we’re the only musicians on everything, and we try to keep it that way,” explains Simons. “We sing everything in unison. We made a conscious decision to stay true to our name, TeamMate. We didn’t want a lead singer-type band, we’re partners.” Their songwriting is also a joint and equal effort; “Since I’m from a percussive background, I can’t always articulate what I want musically, but I have a way of communicating it to Scott that makes no sense to any other human, and he knows how to translate it,” Buncher reveals. “You know how twins develop a language in the womb that only they can understand? We have that, but for music. It’s like a series of baseball signals,” says Simons. “It’s more like a series of eye rolls,” Buncher adds with a laugh.

TeamMate will release their new self-titled album on February 16th via Rostrum Records, and will have their release show at Los Angeles landmark The Troubadour on February 21st, supporting a band called Frenship, ironically enough. To give us a taste of what’s to come, the band recently unleashed fist-pumping percussive anthem “Damage.” “‘Damage’ is one of our older songs, and it came at a time for us when we were transitioning from the breakup,” recalls Simons. “Like the song says, if we found a way to get this together, we could do something awesome. We hope people can relate to it.”

2 thoughts on “AN EXCLUSIVE INTERVIEW with TEAMMATE”