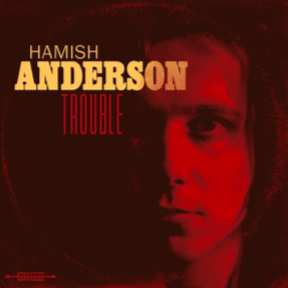 I firmly believe that there’s something in the water in Australia; every time I turn around, there’s another brilliant artist emerging from the Land Down Under, and Hamish Anderson is one such phenom. The Los Angeles-based Aussie will release his debut full-length album, Trouble, on October 21st via  Kobalt/AWA.

The guitar-wielding Anderson saunters right out of the gate with opening groover “Trouble”, and the momentum only builds through the record’s 12 tracks. Venturing into reverb-laden 60s psychedelia, hazy blues club jams, and gritty slide guitar rock, Anderson pays glimmering homage to his string-bending heroes like Keith Richards and B.B. King. His Eric Clapton-esque smokey vocal swagger passionately aligns with smoldering riff after riff. Though his influences come through in his work, Anderson’s music stands on its own, and listening to this stunner ain’t no trouble at all.