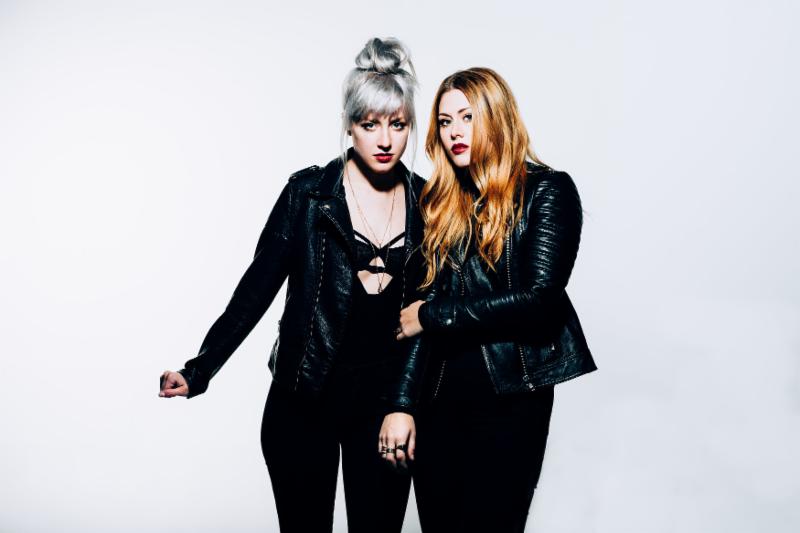 “Our mother enrolled us in classical violin lessons when I was four and Rebecca was three, and God bless her, can you imagine a three year old playing a violin? It must’ve been horrendous,” laughs Megan Lovell, who, along with her sister Rebecca, comprise rock duo Larkin Poe.

The classically-trained pair got a good dose of classic rock from their father, who had Fleetwood Mac, Pink Floyd, and The Allman Brothers on heavy rotation in their childhood home. Later, the Lovells ventured into the bluegrass world, a genre prevalent in their north Georgia hometown.  These days, there’s no doubt about it, these full-fledged rock n’ roll ladies unapologetically shred.

“A large part of the transition was based on just picking up electrified versions of the instruments we already played,” explains Rebecca. “Megan started on lap steel at 15; that was pivotal for us as a group because she was able to plug into a good amplifier and turn on some Tube Screamer distortion—it changed the way we viewed our instruments. It was at her insistence that I picked up electric guitar; it’s become a way for us to express our inner rock chicks.”

“To our dismay, we get a reaction for being females who front a rock band,” she continues. “It’s ridiculous that it’s anything other than normal for ladies to be on stage rocking out, but I think the less of a deal we make about it, the better. Music is music regardless of your gender, your race, your size, or your background, anybody can rock out. We just want to inspire people to learn to play their instruments well.”

The sisters were discovered in their teens by rock icon and mentor Elvis Costello, with whom they are currently on tour supporting their latest release, Reskinned. “Being able to watch such an amazing musician, writer, and entertainer every night is so inspirational, we’ve learned a lot,” says Rebecca. “He’s encouraged us to make art regardless of genre; all he’s interested in is a good song, and it doesn’t matter to him where it sits, and we’ve taken that to heart.” The tour brings them to The Ryman Auditorium to perform on October 17th. Larkin Poe has performed at the historic venue with Costello in the past, and fondly recall the experience. “We walked into that room with a great amount of respect. Knowing that the music that’s been made and soaked into that stage and into those walls, it was exciting to be able to share in that tradition. It’s a gift, and getting to return is equally incredible,” says Rebecca, as Megan interjects, “There’s a feeling of hallowed ground  there for sure.”

Though they are used to whirlwind tour travel, the Lovells admit that being on the road with your sister isn’t always the easiest situation.  “It can get pretty crazy on the road when you haven’t had any sleep and you’re really frustrated, and there she is, in your space, pushing your buttons,” laughs Megan. “Luckily we love each other an awful lot, so it works.”

“The key to our relationship as sisters, or the key to any working relationship really, is deep, deep respect, and the ability to put your ego to the side, even when it’s difficult. We approach each other on equal terms, and it’s something we learn over and over again. When we stumble, we forgive each other,” adds Rebecca. “We’ve never been stronger as a team than we are now.”