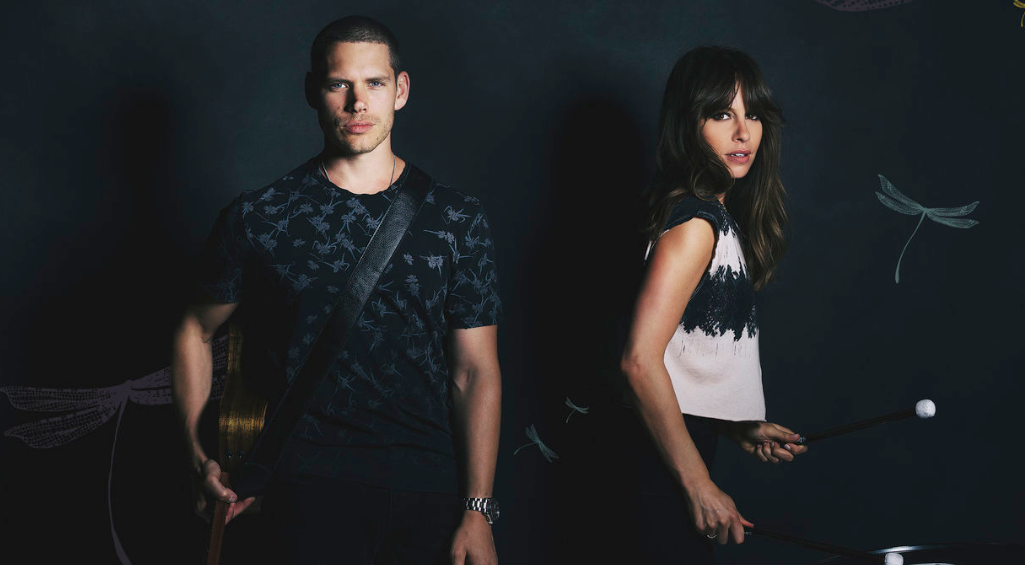 Jenn Korbee and husband Tom Korbee, who perform together as Los Angeles-based pop duo Korbee, started out as independent artists who sometimes collaborated; “I would write on his stuff, he’d write on mine; we wrote a proper duet together and we talked about releasing it, and it we both were like ‘Why aren’t we doing this together?’,” Jenn says with a laugh. ‘Music just started flying out of us!  We put out an EP in 2013, it just totally worked.”

The pair are working on a full length record, and have embarked on a tour which will bring them to the High Watt in Nashville on October 17th. “The tour is a preview of what will be on our album. We’re only performing a couple of our released songs, most of the show is all new stuff,” Jenn explains. “It was scary at first, like jumping off a cliff, but it’s gone really well so far. The show is nonstop dancing and fun. We literally hand out glow sticks, and everyone turns into an 8 year old. It’s a blast.”

“It’s an arena-sized show in an intimate venue,” she adds about their live show. “It makes us feel really connected to the audience.” Korbee blends sunny, anthemic folk pop with tribal-esque drums and touches of gospel…with electronic elements mixed in for added flavor. “We write about hope. Even when we’re in the middle of something tough, our songs always have a ray of sunshine,” she says. “It has solidified how we view the world, we’ve always been ‘look on the bright side’ kind of people.”

Korbee’s mission of hope extends beyond the stage; “We do a lot with the Donald Driver Foundation; they work with homeless kids to get them off the streets,” Jenn explains. “I grew up in Wisconsin, and of course was a die-hard Packers fan. He is basically our most famous wide receiver of all time, and when he won “Dancing With The Stars”, I sent him a tweet congratulating him; he contacted me right away and asked us to help with some events, we were so excited. They do amazing things.”

“Truthfully, Tom and I both grew up doing volunteer work, it’s a big part of our lives. If we can help in any way and make positive difference, it’s our main objective,” she continues. “We have such a special opportunity as artists to lift people up and bring joy, and that’s what we strive to do.”