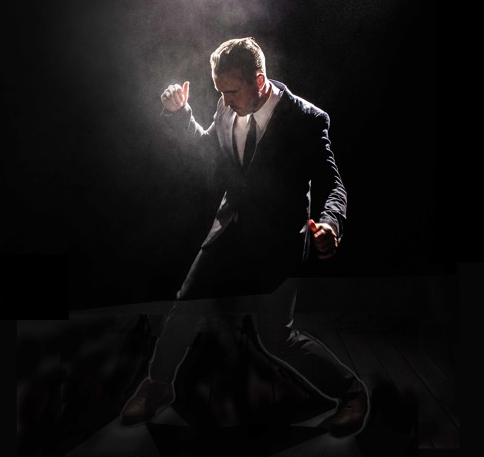 Los Angeles indie band Caught A Ghost is difficult to categorize, and that’s exactly the way frontman Jesse Nolan prefers it. “My tastes range from classical to early jazz to contemporary club music. I pull from a lot of different sources of inspiration, there’s always a bit of collage going on with my music. Hopefully my singing and the storytelling unifies it all,” he says with a laugh.

Refusing to accept genre as a fixed concept, Nolan instead enjoys the challenge of exploring textures while pitting genres against each other to make something timeless, relevant, and sonically unique.  “I like using the formal characteristics of a genre in a alternate context. I’m always looking to do something different than what’s been done before. Sometimes it happens by accident, sometimes it’s a matter of course,” he adds.

While he uses electronic elements in his music, Nolan always tries to retain something human in the composition—whether it be voice, guitar, or some other instrument possessing a human-like energy. “That’s what makes music relatable, there has to be something familiar about the experience, otherwise, it just feels like science fiction,” he explains. With his mind-blowing song ‘No Sugar In My Coffee’, a track from Caught A Ghost’s 2014 LP, Human Nature, Nolan’s soulful voice blends seamlessly with electronic grooves and found sounds. “I used spoons from my kitchen, a saw blade I found in my garage, and a deck of cards from my house,” he laughs.

Nolan has been working on the newest Caught A Ghost record, which draws heavily on the influence of trap music and the pathways he explored with “No Sugar in My Coffee”. “There are a lot of different energies running through the new music—the 70s funk and Motown influence is still there, it’s just not as prominent,” he explains. “It’s a more contemporary sound on this album; I think part of it is because of the reaction that ‘No Sugar In My Coffee’ got, which is my favorite song from my last record. I wanted to carry that one with me, to develop that direction a little more. I’ve been influenced by a lot of electronic producers and by the way they utilize grooves, the whole trap trend has been really influential to me as well.”

“I plan to release a single called ‘If You Only Knew’ in the next couple of weeks,” Nolan reveals.  “On the new song, you can hear the electronic and trap inlfuences, along with a vocal approach that is different than what you’d expect to be paired with those other styles.” He’ll have the chance to road-test the new material while he’s on tour this month with fellow Los Angelenos, indie rock band Smoke Season.

Even though the tour won’t bring Nolan to the Music City this time, he says he’d like to spend some time here in the near future. “I love Nashville! I’ve been wanting to go and stay there a long period of time. I’ve only ever been there for like a day at a time performing, which is my experience of so much of the United States,” he laughs. “I know so many people who’ve made the Nashville life work for them, I’m jealous.”