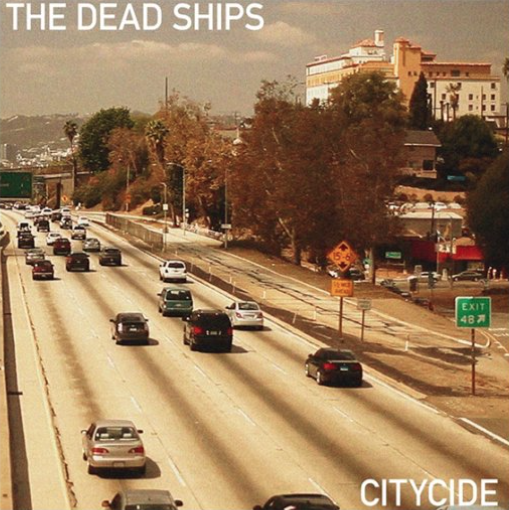 Teeming with the masses and implicitly alive via bustle and noise, big cities have so much to offer; unfortunately, this offering can also include soul-crushing loneliness and isolation.

Devlin McCluskey, frontman for California rock outfit The Dead Ships, was moved by the idea that individuals who commit suicide by jumping from the Golden Gate Bridge face the city they are leaving behind; what began as a song idea turned into an album—Citycide, set for release on June 24th via Nevado Music. As electrically animated and enjoyably driving as Citycide is, there are some serious themes within its contents.

In opening song “Company Line”, McCluskey’s striking vocals immediately engage the listener. Part storytelling, part urgent and bouncy guitar-driven garage rock propelled by Chris Spindelilus’ thundering drum work, the track sets the tone for this stellar effort. “Los Feliz” is a fuzzy, rollicking, punk-tastic call-to-arms to “keep moving on”; “Floorboards” is a brutal, charging song that builds to an electric crescendo which must be heard to be truly appreciated. The gears change with the quietly hopeful “First Mistakes”, and the sparsely dreamy “Citycide”, an inverse to the album’s darker themes. The adventure closes with “Tomorrow’s Crashes” a technically satisfying rhythmic standout showcasing Spindelilus’ and bassist Alex Moore’s resounding battery work.

The Dead Ships, with producer Brendan Canning (Broken Social Scene), have deftly crafted quite a gem, one that highlights the band’s striking and unquenchable energy and proves beyond question that The Dead Ships are a force to be reckoned with.

[This lovely review was crafted by Hunter MacLeod, part-time freelance writer and full-time international man of mystery.  Catch up with him on Twitter–@MadH_MacLeod.]