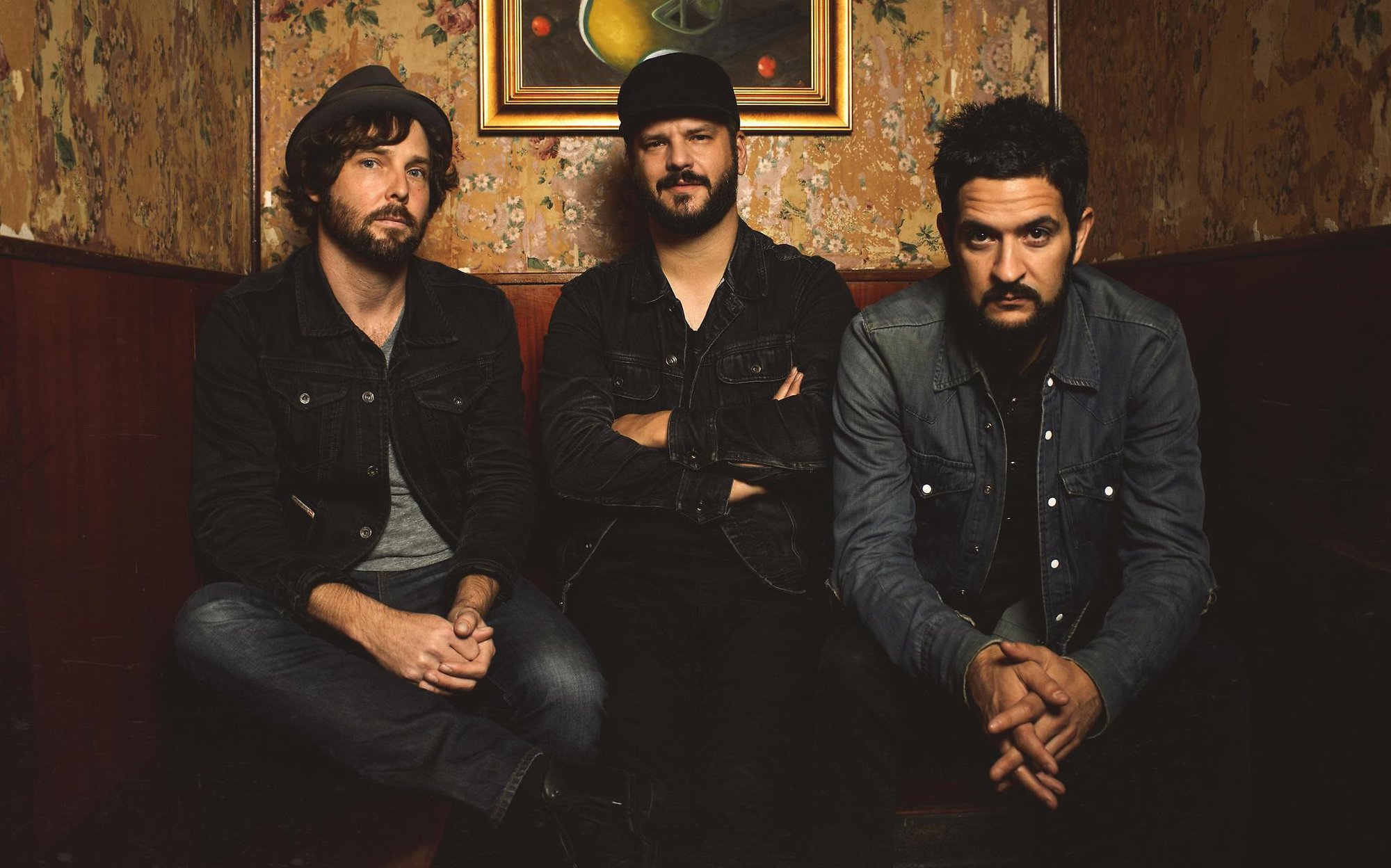 Chris Vos, frontman of Los Angeles-based blues-rock trio The Record Company hadn’t yet had his first cup of coffee, so I caught him in his natural, uncaffeinated state for our recent chat:

Me: I play bass, and I have to tell you, y’all have the grooviest bass lines ever.

He:  To achieve our sound, we spend a lot of time thinking about bass and drums; we always build from there.  For me, I can lay anything on top of that—harmonica, pedal steel, lap steel, acoustic guitar, whatever.  You have to have a firm foundation before you can decorate the house.

He: Well hey, the day’s starting out all right!

It’s true, Alex Stiff’s bass lines will wedge themselves into the very depths of your soul, but combined with Marc Cazorla’s dynamic expertise behind the drum kit and Vos’ visceral baritone, The Record Company is a highly addictive sonic powerhouse of massive proportions.  The band is exploding at the moment—they released their hit record Give It Back To You via Concord Music Group in February, performed their hit single “Off The Ground” on late night television, played countless shows, and rubbed elbows with their musical heroes.  “We’re so thankful; it’s just beauty.  It’s humbling.  It doesn’t feel like those things are actually happening when they’re happening,” says Vos. “We opened for Mavis Staples a couple of months ago; after we played, her guitar player grabbed me by the arm and said ‘hey, we really enjoyed your set, come on in.’ He opened a dressing room door, and Mavis was in there waving me into the room.  I got to sit in there and listen to her and the band warm up with an a cappella gospel song.  I was the only audience.  There are no words for it.  You try to be present and be there while it’s all happening, to learn as much as you can and take in as much as you can.”

It’s a long way from Vos’ upbringing on a Wisconsin dairy farm; “My grandpa was the first guy I ever saw play an instrument.  I grew up across the street from him, I’d go across the street at 4 or 5 years old and he’d pull out his accordion and bust out ‘Good Night Irene’, or play country songs on his harmonica—Willie, Waylon, Hank, and Patsy Cline,” he recalls. “My dad had a nice collection of CDs in the tractor; when I was little, I’d go sit at his feet in the cab of the tractor while he plowed and we’d listen to whole records—ZZ Top, CCR, The Boss, and The Stones.”

“When you’re a kid listening to Sticky Fingers and watching a tractor tire turn, something in your little head goes ‘the movement and the music are working together, that’s unbelievable.’ Thus, the disease manifests itself,” he adds with a a laugh. “My mother loved the blues, and she kept me supplied with blues music.  When other kids were listening to Smashing Pumpkins, I was listening to Ray Charles.”

Tight knit farm families generally don’t move far away from each other, and Vos admits it was a tough decision to move to Los Angeles. “I knew it was the right thing to do,” he says. That may be the understatement of the century—Vos met and joined forced with Stiff and Cazorla in Los Angeles, and the rest is history in the making.

The Record Company is lighting up the summer festival circuit, and will make their debut appearance at Bonnaroo this week. “I love playing festivals, it gives you the chance to play in front of so many new faces,” Vos says. “I love every single second of it.”

[The Record Company will perform at Bonnaroo’s New Music On Tap Lounge on Saturday, June 11th at 4:30 p.m.]