An extreme lack of sleep, a lost wallet, and a misplaced guitar were worth the trouble at SXSW this year for Marcus King and his band; on their last night in Austin, the outfit decided to make a stop at the John Lennon Educational Tour Bus for a fateful encounter. 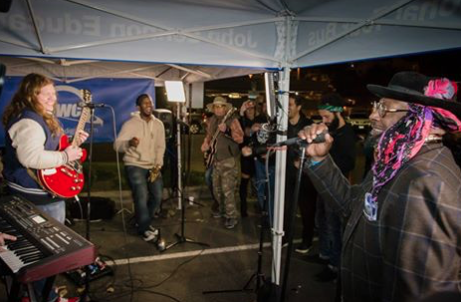 “George Clinton was in there hanging out.  We started jamming; I was hoping he’d join us, so I started singing ‘Unfunky UFO’.  Then, I heard someone singing along with me, and I was like ‘oh snap!’” exclaims King about his hang the Prime Minister of Funk.  “It was awesome.”

Since our last chat in March, King and company have been tearing up the highways from coast to coast in support of their album Soul Insight, a tour which will bring the band to Nashville for a show at local legendary venue, The Basement, on Sunday, May 22nd.  “Nashville’s always a good time.  People come out to see you, and they really appreciate what it is that we’re doing,” comments King on the notoriously discerning Music City audience.  “I’d be lying if I said it wasn’t one of the tougher crowds we play, but we thrive off of that.  We like the challenge.”

In the midst of their busy touring schedule, the band found time to record a new album, which King says should be released in late August or early September.  “It’s probably going to be self-titled, I’m not 100% sure yet.  There are 12 songs and a hidden bonus track,” he says. “We recorded the first album in San Diego, and the sound of the record reflected where we were, having a large time during all those beautiful sunshine-y days.  This one we cut in Stamford, Connecticut in January and February, it was all snowy, a completely different vibe.  Also, the songs on this record are more from a third person’s standpoint, they tell different kinds of stories.”

The new album was produced by King’s idol, legendary blues rock guitarist Warren Haynes; “There was never a dull moment being around Warren.  There are some surprise guests on there,” he says, adding, “Warren has always been one of my heroes for so many reasons; I’ve always admired his ability to arrange tunes in such a pleasant way.  He was able to take our ideas and help us arrange them into compositions.”

After their Nashville show, the band will make its way up the east coast, stopping to play Mountain Jam in Hunter, New York, sharing stages with the likes of Beck, Wilco, and Gov’t Mule; there are show dates booked all the way into next January.  “We’re playing as much as we can, trying to play to as many people who will listen.  We’re trying to evolve the sound so we can express ourselves to our fullest capacities.  It’s a release of emotion, that’s what music is for me, being able to speak your mind, not repressing emotions, but voicing them in a positive manner,” King says.  “People are taught they shouldn’t have emotions or feel; when you come to see us, we want you to be able to relate to what we’re trying to express, and to know that you have a shoulder to lean on.”