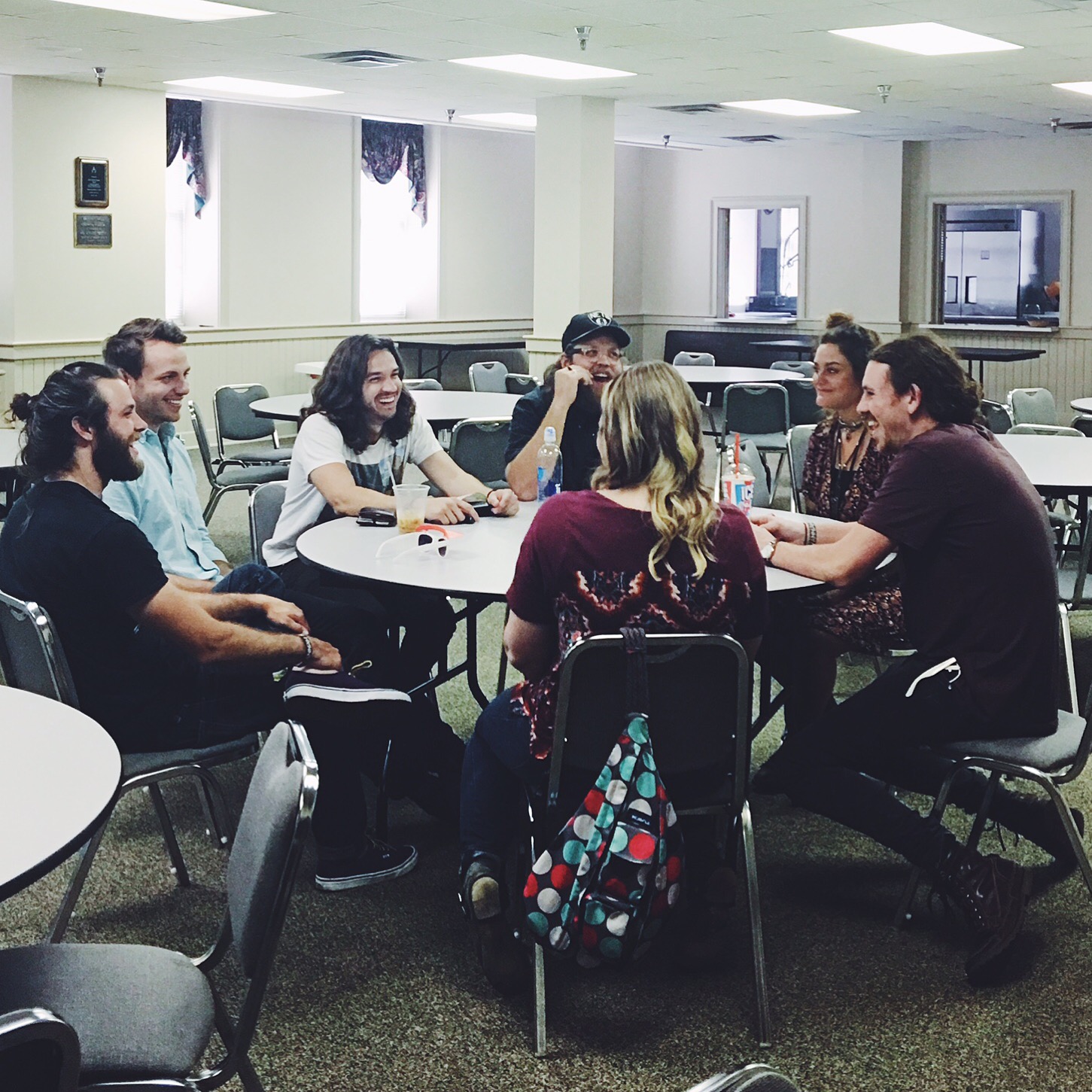 My chat with Athens-based folk-rock tribe Family and Friends at Savannah Stopover was like watching an improv comedy ping pong match best held around a circular table:

Me: What would you like my beloved readers to know about Family and Friends?

Mike: You also have a girlfriend.

Tuna: You’re right. So Mike is a Cancer…

Another fact to note is that they (namely guitarist JP McKenzie) are serious about coffee.  Let the ping pong match continue:

JP: We were making a 13 hour drive from Chicago back to Atlanta in one day; we were all going to have to take turns driving, so we stopped at a coffee shop where growlers were lined up along the wall.  I was like ‘I’m totally going to get a growler of cold brew for the road so I can drink coffee and be set when it’s my turn to drive!’  It cost $15, and I thought that was a great deal.  So I went to buy one, and the guy was like, ‘Do you want me to fill it up?’ and I did, so he went and filled it and brought it back, I paid, and we left.  Five hours later, we were at a gas station and I was like ‘I’m gonna bust this thing open and get some ice coffee!’  I started pouring it, it was clear, and I was so confused.  I shook it up and poured again, and it was still clear.  I looked closer at the growler and on the bottle it said ‘Brewing Water.’  I paid $15 for a jug of water. It was supposedly from this specific lake near Chicago, and there was all these other pretentious things one could think to write on a growler.

Mike: I don’t think I’ve ever seen JP lose it like that before. It was the unraveling of a man.

Family and Friends has been busy, playing shows and festivals, touring in the northeast, and opening for the Oh Hellos during a six-week tour last fall.  “People were singing along with us to our songs, it was surreal,” recalls vocalist Melanie Annabelle. “It makes us feel connected to them.”  “I mean, I’m not even sure I know all the lyrics, ” adds vocalist and guitarist Mike MacDonald with a laugh.

They’re also currently working on their first full length album—they spent some time sequestered in Asheville, North Carolina to write songs, and are planning to record in the summer for a release in the fall. “We want to take our time and make we’re putting out something we can be proud of, something we worked really hard on,” adds MacDonald.

The band will appear in Charlotte, North Carolina at Tuck Fest, sharing stages with the likes of Langhorne Slim and Dawes. While there are no plans to bring their highly entertaining selves and their highly energetic live performance back to Nashville soon on the books, MacDonald assures me they’ll be back.  “When we play in Nashville and people respond, it feels like it means that much more because everyone there is an excellent musician or typically well-versed in musicianship, it’s like a victory to win them over,” he says.  “It’s always an adventure when we go there,” says Annabelle.  “I love Nashville.”