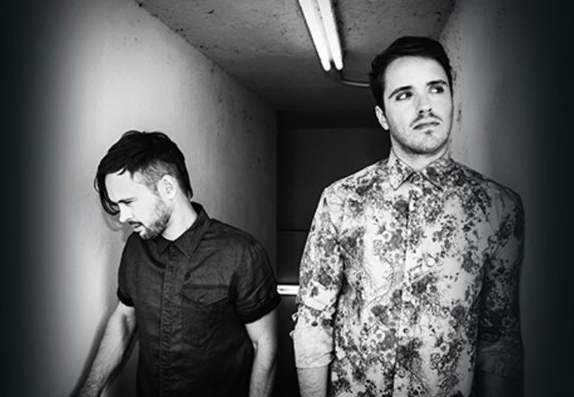 Alt-pop sibling duo Michael and Keith Jeffery, also known as Atlas Genius, have been tearing up the highways touring in support of their latest album, Inanimate Objects, released last August via Warner Brothers Records.  I had the chance to chat with both Jefferys, who gave me the witty low-down about tour life in their gorgeous Australian accents; “Things on the tour have generally been pretty good, but the last couple of days have been trying.  I’m nursing a cold; as a singer, a cold is not good, and Michael fell off the stage a few days ago and injured his arm pretty badly,” says vocalist Keith.

“We were playing a college show, and during soundcheck, there was a white sheet pulled tight behind the stage; I walked around my drums and put my hand against the wall—which ended up just being a sheet….it gave way and I fell from the drum riser up high onto the stage, landed on my right arm, which bent in a direction it’s not supposed to, and it’s quite sore,” says drummer Michael with a laugh.  “I strained my shoulder; I’ve played the three shows since it happened, it’s painful for a few tracks, but then it’s okay.  It’s rock n’ roll.”  “At the moment we’re a little beaten up,” adds Keith, “But so far, we’ve played the best shows of our career.  The crowds have been the best too, they’ve been really responsive to our new set.  It feels really good.”

Unless you’ve been in hibernation for the last few years, it’s impossible not to sit up and take notice that the alternative music scene is being totally dominated by bands from Down Under.  What is it with all these musical Australians?  “I think it’s the Vegemite,” Michael says with a laugh. “Seriously though, it’s not a coincidence; the Australian culture in general is very anti-establishment.  In the circles we move in, there’s a certain desire to go against the norm and break the rules.  When you’re in Australia, you have to try really damn hard to get out of the country, it’s so far away, and you’ve got to do something to stand out.”

Stand out they do—the brothers have been touring nonstop, making the rounds of late night television performances, capturing the hearts and captivating the ears of all who listen, and earning them spots at this summer’s major festivals.  “Molecules” and “Stockholm”, two ridiculously infectious singles from Inanimate Objects, have gotten serious radio play, but they aren’t the only stunners on the record.  “We’re proud of all the songs on the album, but our favorites change from day-to-day; we just started playing ‘The City We Grow’ and ‘Where I Belong’ which we didn’t really play at all last year when we were touring for some reason.  I guess you’d consider them ‘deeper cuts’ from the album, but they feel great live and the crowds seem to like them. ‘Where I Belong’ is a very honest song which is basically an apology to my ex-girlfriend,” Keith says with a laugh. “‘The City We Grow’ we wrote while we were touring the first album, and it almost got forgotten.  It was written in about 10 different states in America; now we’ll be somewhere and I’ll remember that we did the bass line to the song in that particular city, or we’ll travel through another city and remember that we recorded the drums there.”

If you are in or near the Music City, you can celebrate tax day and see Atlas Genius in action at 3rd & Lindsley on Friday, April 15th.  “You should definitely come to the show, it’s going to be a spiritual experience,” Keith says with a twinkle in his voice. “We’ll even offer a money-back guarantee! But, if you do want your money back, you’ll have to send a letter with all of your credit card details to an obscure address in Russia.  We think it’s an offer you can’t refuse.”