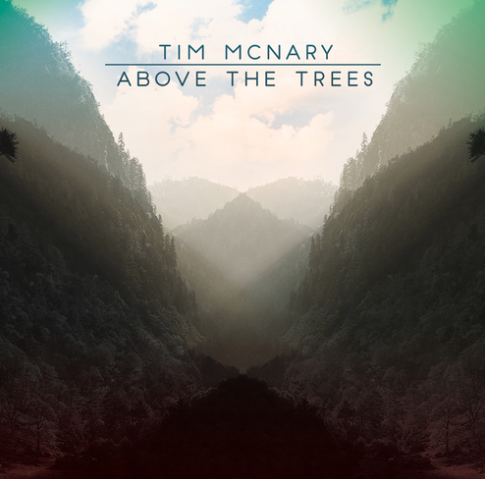 Music is something that we connect to and long for in good times and bad; it connects with something inside of us that longs to be explored and solidified. With Tim McNary’s new EP, Above The Trees, the singer-songwriter has dug deep into the well of the soul to find sounds that echo with my own personal questions and longings. It is no easy task to find something that so resonates with the human spirit, but every song on the album finds a place inside of me to call home. Each path we travel has something to teach us, and McNary’s experiences reverberate throughout Above The Trees.

Raised in a strict evangelical home where secular music was prohibited, McNary chose his own path, which led him to Brazil.   The experience was captivating; after two years, he moved back to the States, found himself burnt out by corporate America, and decided it was time to pursue a career as a musician. McNary played in bands, started his own,  and found success opening for artists like the Civil Wars.  Mcnary’s path led him to Atlanta; while living in his van, fulfilling tour commitments, his van and all of his musical equipment was stolen. The songsmith’s path then led him to Nashville; after a year and a half of working and saving money, he was able to record his third EP, Above The Trees.

Recorded in a cabin in the mountains of Georgia, the album’s songs were inspired by a five year roller-coaster ride of depression, homelessness, and finding contentment through meditation, and explore heartbreak, a longing for personal connection, the journey towards courage, and a hope for transcendence.

The opening track, “Be With Me,” begins with the haunting echoes of McNary’s voice over the finger-picking of a guitar; he expresses longing for closeness, and tells tales of his South American exploration.  The chorus soars as the singer cries out, reiterating that longing for connection and closeness. The title track, “Above the Trees,” is a true standout and my personal favorite from the EP; a beautiful song permeated with sounds of transcendence and the intense desire to reach a place of euphoria, McNary cries out in the chorus, “when I close my eyes and will that I would float above the trees,” and exemplifies the yearning to escape and find a place of peace and rest. The third song, “Missus,” is musically simple, but authentically profound, displaying the singer’s daunting honesty and transparency.  As he makes confession after confession of his personal stuggles, the track, filled with gorgeously lush string arrangements and lap steel swells that ring out throughout the song, resembles a letter that McNary is writing to someone willing to listen and accept him for the person he is. The final and most poetic song of the album, “Echoes of A Whole,” shuns complicated productions and instrumentation, allowing his powerful lyrics and voice to shine; thematically, it resonates with the album’s other tracks, as he repeats “hold me like new believers holding onto God,”  further evidence of longing.  Each word and rhythm is deeply felt and leaves the listener with an ending, but no conclusion. No answer is found, but the journey and the people he’s met along the way are worth it.

Above The Trees is a veritable wellspring of the questions that we all ask ourselves, and McNary tells us the beauty is found in the wandering; he embraces the journey and recounts it with conviction in songs that wonderfully capture the human spirit.   I am so excited to see where Tim McNary’s path leads him next.

Pre-order Above The Trees, set for release on April 8th: https://itunes.apple.com/us/album/above-the-trees/id1085882560

**Written by James Farley; you can follow him at https://jamesfarleymusic.wordpress.com**