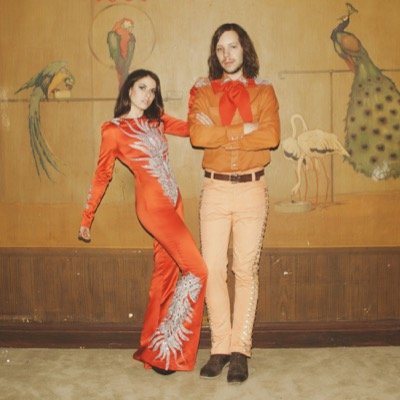 Escondido’s Jessica Maros and Tyler James were in Los Angeles on February 5th, the day their new album, Walking With A Stranger, was released.  I had spoken with Jess a while back after she had relocated from Nashville to Los Angeles to pursue her solo project, KUZIN…and now Tyler was there, and I felt I needed to express my concern that they were going to stay in the City of Angels permanently. “I miss my house in Nashville! It was a good thing for me to move to L.A. for a while.  It’s not home though, Nashville is always home for me, I’ll definitely be back,” Jess says reassuringly.   “It’s just hard because it’s 75° and sunny out here, and you get to skip winter!” Tyler says with a laugh.  “One of the perks of not having a 9-5 job is you can be transient; I’ll never leave Nashville though.”

The duo actually began working on Walking With A Stranger a couple of years ago; “We had more time on this record to experiment, but having it spread out over so much time made it more difficult.  We did our first record in one day; having so much time to work on something also gives you time to second-guess your creative instinct and time to overthink whether something is ‘good’ or ‘bad’,” explains Tyler.  “It was nice this time around to let the record to breathe, then come back to it. We brought in outside perspectives, and we’d been playing the songs out on the road for a while.  It’s come full circle; we had moments of doubt and moments of joy, we had to really sit and think about how we wanted to represent our art,” adds Jess.  “I’m happy with it.”

The new album has a a rock n’ roll flair, but Escondido’s signature elements of desert country are still present.  “We wanted to do a broader kind of arrangement on this album; Tyler played most of the instruments.  It was recorded the way we play live, and that was important for us,” recalls Jess.  “Maybe it will appeal to a broader audience.”

Maybe? How about definitely— the album has now surpassed one million streams on Spotify.

“It’s weird to hold onto something for so long, and then have everyone be able to hear it 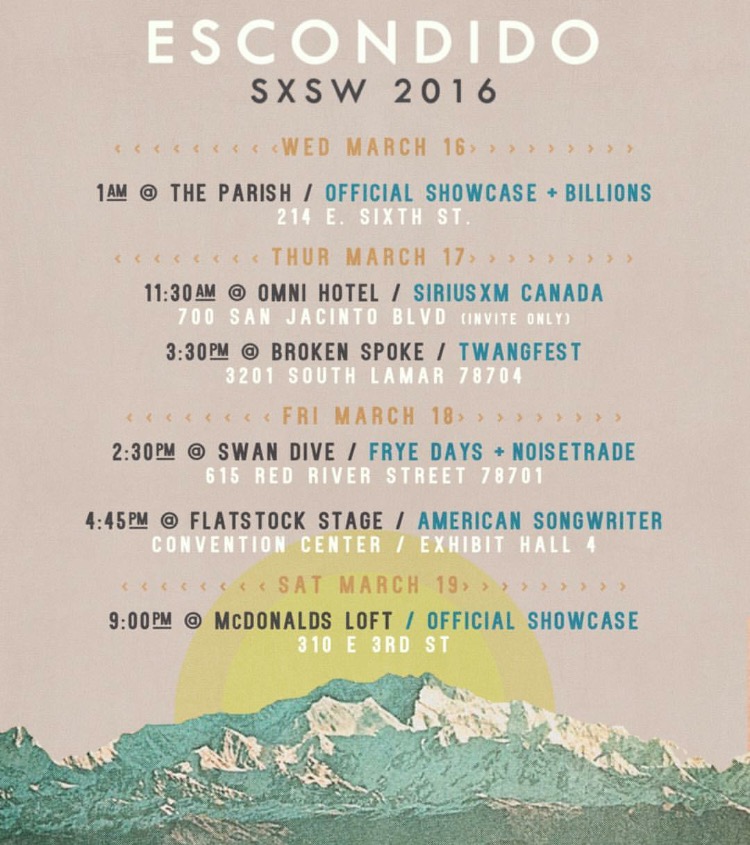 after one click of a button,” explains Jess.  “It feels like a big relief too; we put it out on our own, and we’re working really hard to build this thing.”  “I hope people will enjoy our album as much as we do, and listen to it loud,”  adds Tyler with a laugh.

The pair have been on tour for a bit, finishing a run with The Lone Bellow before traveling to Austin for SXSW to perform an official showcase and also at several other festival parties;  they will then embark on their first batch of headlining tour dates nationwide.  “I love traveling, I love the road—whether it’s playing shows or just experiencing the sights and sounds out there, it’s really inspiring,”  says Tyler.

Escondido will play for the hometown crowd at Mercy Lounge in Nashville on April 22nd, which is a rather sentimental affair for Jess and Tyler; “We played our first show there! Mercy Lounge has always been supportive, giving us opening slots in the beginning,” says Tyler.  “It’s like we’re bringing it back full circle.”