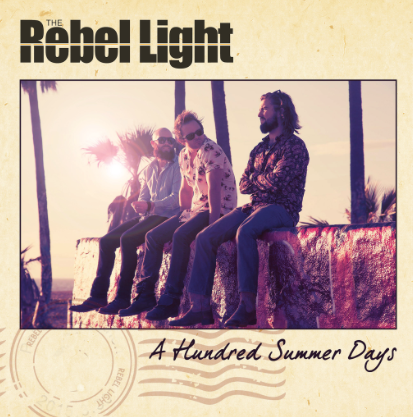 On these gloomy, winter days, a rare glimpse of sunshine warms your entire being, and builds anticipation for brighter days to come.  Los Angeles trio The Rebel Light, comprised of Will Steil, his brother, Jarrett Steil, and cousin Brandon Cooke, has been able to translate that sunshine into musical form with their splendid new single, “Strangers”.  The song has garnered airplay and frequent rotation from major radio outlets like Sirius XM’s Alt-Nation; “We’re so appreciative of the opportunity.  The response has been awesome,” says frontman Will.

The brothers, originally from New York, moved to the Golden State to pursue music.  Will, who had lived in Ireland for a while (which is the opposite of Southern California weather-wise)  was ready to experience steady sunshine and the vibrant Los Angeles music scene.  “We originally came out here for two months just to check it out, play some shows, and then we were like ‘let’s just stay,’” he says.  The Steils joined a band, it broke up, so they grabbed their California-based cousin Brandon to play drums, and started The Rebel Light.  The outfit is truly a family affair which includes Blue, their catahoula leopard dog and unofficial band mascot. “He’s a handful, man. He’s insanely smart, but requires so much attention. His intelligence works against us, he’s always playing me.  He’s awesome though,” laughs Will.  “He goes with us on tour, he’s not the kind of dog that wants to stay home.  He’s the kind of dog that if you left him in the morning to go to work all day, when you came home that night the house would be absolutely destroyed, couches would be shredded.  He gets so much attention though, he has a pretty cool life, as far as dogs go.”

Will says they wrote “Strangers” while sitting in their back yard.  “We have a little home studio, and we actually recorded it in our house. My brother and I live together. We did the whole thing ourselves, had some friends sing drunken back-up vocals, it’s a reflection of our time living here in Los Angeles,” he explains with a laugh. “The environment started seeping into our sound, and created that retro, Southern California vibe.  It’s sunny here, people are happy, so that definitely affected how we sound.  You listen to the Beach Boys, and it’s like you’re listening to California. If you listen to Pink Floyd, you’re listening to dark English days, you can picture London being rained on.  I’m not saying we’re the Beach Boys or Pink Floyd, but you know what I mean.”

For now, the guys are working on a four-song EP, called A Hundred Summer Days, to release in June, and hope to have an album out by the end of 2016.  Will says The Rebel Light is planning a proper nationwide tour which should begin in February.  I can’t wait for them to bring some of that sunshine my way.