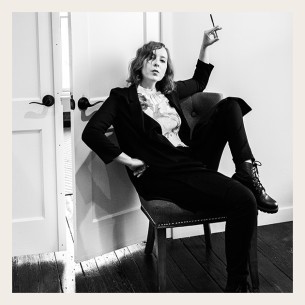 Brooke Waggoner has music in her DNA; her singing brothers can play a multitude of instruments, and her mother is a pianist.  Her great grandfather, a renowned classical pianist who fled Germany during the Second World War, started a piano company in New York, eventually relocating the family business to south Louisiana.  Waggoner herself began writing music at the ripe old age of nine; “I was writing goofy girl-crush stuff; you have to start somewhere though, right?” she says with a laugh.  “I was mimicking a lot of stuff I was hearing, lyrically at least, even though I wasn’t exactly sure what I wanted to say.  It was such a great instrumental process though, I took it really seriously. That came more naturally than the words component; over time, I found a voice, hopefully, as a lyricist, but it’s definitely taken a lot longer to develop.”

Waggoner has definitely found a voice; the indie-folk songstress has shared it with thousands of eager ears through three, soon to be four full-length records, at major festivals, and on countless stages in amazing venues.  Her delicate voice and enduring style of musical composition spans generations and appeals to a wide variety of listeners.  “So many artists love to live in the past, looking back on the past and saying ‘Oh, that would’ve been my time, my era, I’m too late or too soon,’ or whatever, wherever you fall in the timeline of things. I gravitate towards anything that feels ‘classic’, in any genre of any media. Maybe that comes from an upbringing in a more classical style of music—laying the foundation for that, and then finding your voice as that evolves.  The beauty of art is we’re all piggybacking, rubbing up on each other in a way, taking something from the past and trying to look to the future,” she explains.  “If it’s timeless, for me, that’s the goal.”

A majority of the songs from her latest album, Sweven, set for release January 15th via Swoon Moon Music, were written during her pregnancy, which informed the subject matter and overall theme, exploring the ideas of growth and changes in life.  “I wrote most of the album while I was pregnant.  I think that’s why I wanted to make something that felt a little bit more mature, like where I was in life; giving birth to another human and raising a child is a really powerful stepping stone in growing up. I was thinking a lot about those things, and thinking about the fact that he would hear this record one day; he was growing inside me while this record was being created,” Waggoner warmly recalls.  “I had a real sense of wanting to make him proud, wanting to do something that he could be proud of one day.  It directed my lyrical content, I wrote about things I would want to talk to him about one day.”

The album’s sound ranges from the orchestral in songs like “Proof”, title track “Sweven”, and “Adults”, to organ-centric semi-garage rock in the groove-tastic “Widow Maker”; Waggoner also creatively employs the use of the spoken word on songs like “Cherry-Pick” and “Egg Shells”, where an older southern-accented gentleman recites a snippet of nursery rhyme “Humpty Dumpty”.  “I love the closing track, ‘The Splitting of Yourself In Two’; I recorded that live a couple of years ago, just piano and vocals, and decided later to orchestrate it and put it on the record.  There’s an emotion to that one. I love to end records on that kind of note, the goal is to cry by the end of the record,” she says with a laugh.  “Content-wise it’s something I really wanted to talk about.”

Waggoner kicks off an abbreviated tour to celebrate the record’s release playing for the hometown crowd in the Music City on Saturday, January 16th at EastSide Manor.  She credits the time she spent recording and touring with musical icon Jack White for teaching her how to make things exciting and feel more spontaneous on stage; “My classical background was very regimented and detailed, whereas Jack’s style is more raw, he likes to just see what happens,” she explains.  “I learned a lot from that, it opened up a lot of freedom for me.”  So often, Nashville is characterized by the phrase “tough crowd.”  Waggoner isn’t fazed.  “I really enjoy the element of the bar being raised around here, and I kind of feed off of that.  It’s exciting for me to perform my music for my peers, you learn a lot by watching each other,” she declares.  “We have such  good community and good support.  Nashville’s always been a positive thing for me.”

For tickets to the release show in Nashville: https://www.eventbrite.com/e/brooke-waggoner-at-eastside-manor-tickets-20137268111