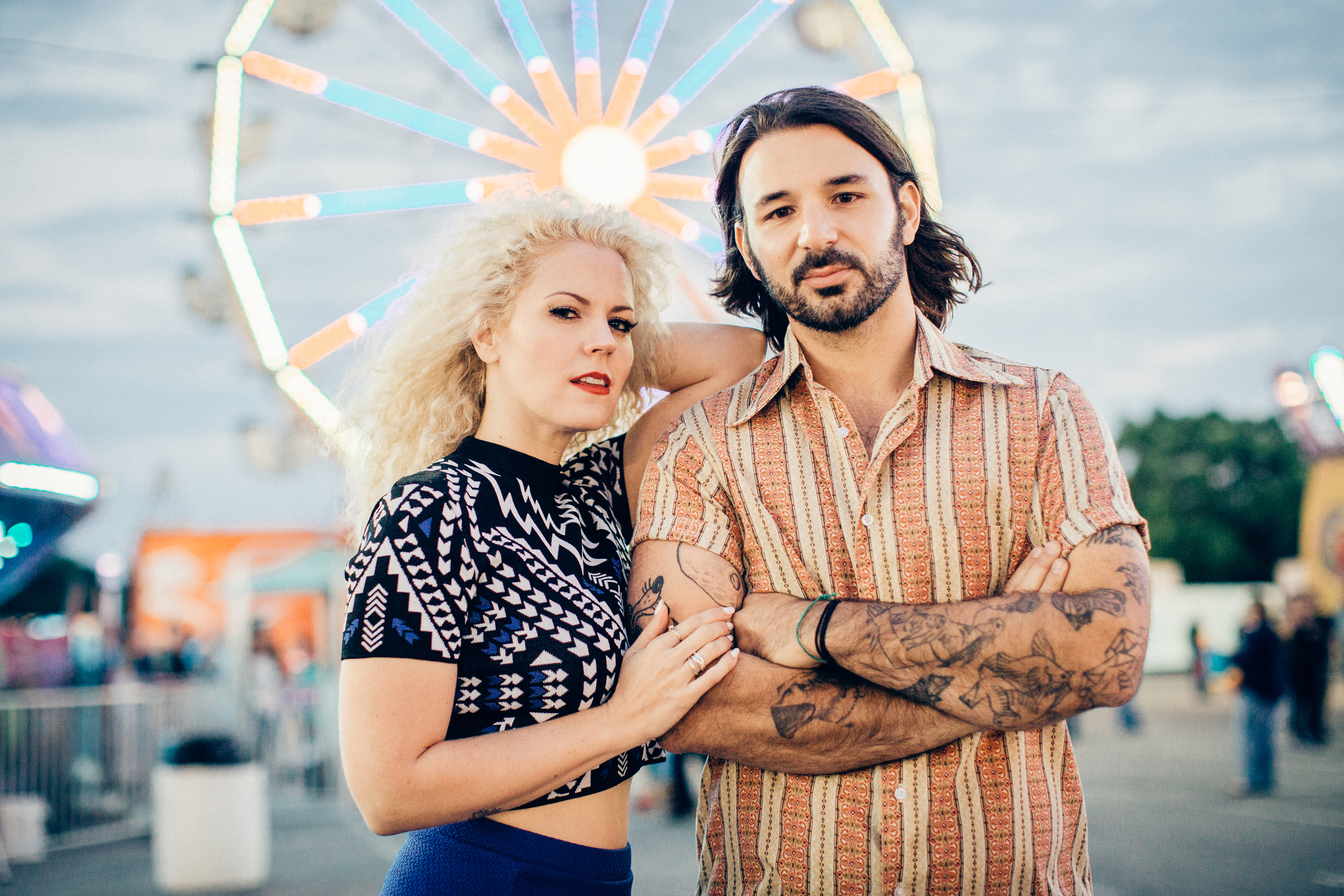 When he was younger, Zack Smith, multi-instrumentalist and one-half of Nashville-based Americana duo Smooth Hound Smith, got tattoos on his fingers to insure that he would never get hired to work in an office.  He walked a series of vocational paths, but music was the only thing that he never stopped doing.  Fate took its course, and Smith met vocalist Caitlin Doyle, the other half of Smooth Hound Smith, in Los Angeles.  “It was like love at first sight; we were both in different bands. I had a friend from high school who was playing in this other band, and he was also dating Caitlin; I saw him, and I saw her, and I thought, ‘How did this dude get this hot chick?’,” says Smith with a twinkle in his eye.  “So then, at times, I sat in with their band, but we didn’t really talk, and eventually, right before I moved to Nashville, we had our first conversation that lasted more than 10 minutes. We hit it off.”

Smith relocated to the Music City, Doyle came for periodic visits, and the pair began making music together; “I used to play the washboard, and I brought it with me,” Doyle recalls.  “I played washboard for him and did backup vocals at Mad Donna’s, our first gig together.”  That’s right. Washboard.

For the last several years, the duo has been making beautiful music together, in work and in life.  “When she and I get onstage together, there’s an electricity between us, and an anticipation.  The crowd’s wondering ‘what are they going to do?’,” says Zack.  While they  occasionally add a bassist to the mix, Smith and Doyle are fiercely committed to remaining a two piece at their core, always exploring the various ways to make their sound as full as it is with only two people. “We always want to be the main dish,” says Doyle.

Their star is only rising; Smooth Hound Smith beat out thousands of bands for a chance to perform at Bonnaroo last summer, have shared stages with some of the biggest names in Americana, and recently toured with Sister Sparrow & The Dirty Birds, playing legendary venues like the Bowery Ballroom to sold-out crowds.  However, the pair has definitely played their fair share of holes-in-the-wall in the middle of nowhere.  “One time, we played at this shitty bar near Lafayette, Louisiana, and our payment was gumbo.  It was Tuesday night, and we didn’t have anything booked, so we played the show.  When we finished our set, the manager said ‘I’m so sorry, we ran out of gumbo’,” recalls Doyle, as Smith adds, “So we looked at each other, then asked the manager if they had any red beans and rice, because that had also been in the offer of payment.  He said, ‘No, we don’t have any red beans and rice tonight either.’  They gave us beer, though.  That’s a non-negotiable.”

Spending eight months at a time on the road left the band with little time to write and record new music.  It also left them with little sanity; “We’re not sane to begin with, and we weren’t sane being out for eight months.  We camp in Wal-Mart parking lots, sleeping in our tour van or at campgrounds.  Sometimes we make enough money to treat ourselves with a night at the Super 8,” laughs Doyle.  Even so, Smooth Hound Smith showcases their blues-y bluegrass prowess and sweet Tennessee harmony on their second full-length album, Sweet Tennessee Honey, set for release on January 15th. “It’s pretty awesome.  We recorded it in a big hurry because there was no guarantee that we’d have anyone working us, any kind of team.  We were on our own at that point.  We had already booked a tour, and we needed to get the album out.  We weren’t completely sure about the album at first, but then we listened to it and got perspective, we liked it,” admits Smith.  “The sophomore slump is real” says Cailtin. “People really liked our first album, and we were somewhat worried.”   The album was recorded in two studios, a living room, and has guest vocal appearances from the likes of Natalie Maines and Sarah Jarosz; all of those elements combined with Smith and Doyle’s enormous talent and tangible musical chemistry, I can bet there is no need for them to worry.

For a sneak peak at Smith’s favorite song from the new album, check out this video from a performance at last summer’s Music City Roots:

For tickets to the album release show at Exit/In in Nashville on January 15th: http://www.smoothhoundsmith.com/tour