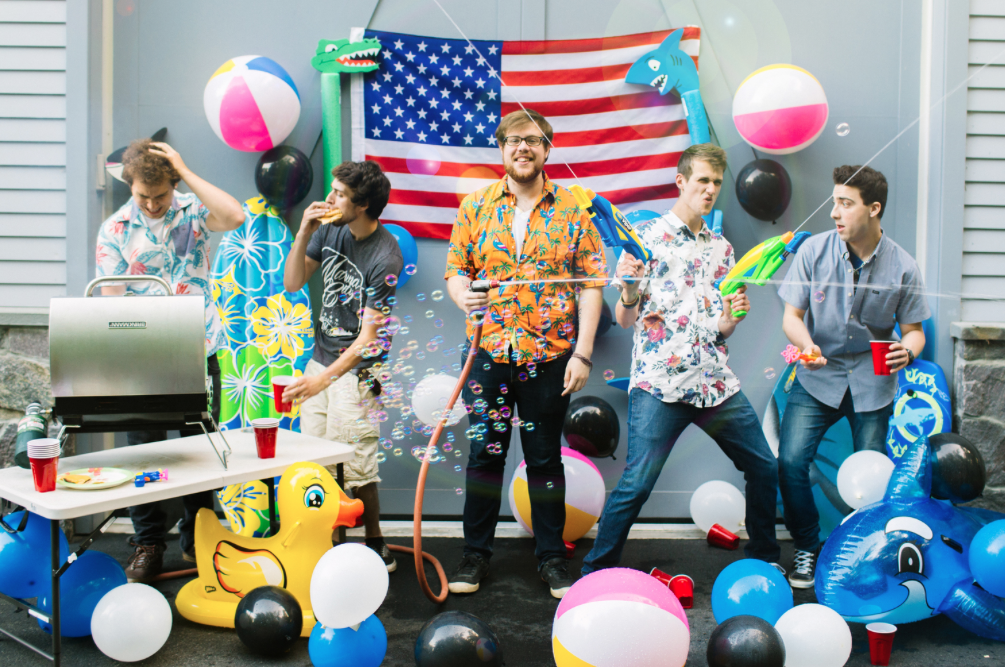 New York’s pop/punk up-and-comers Reckless Serenade have had an exciting 2015; the group released their latest EP, Out Here, and traveled from sea to shining sea to support the release, spreading their message of positivity and fun to all who were smart enough to listen.

I caught up with guitarist Mark Neidhardt not to long ago about their recent appearance in the Music City, and it began a little something like this:

Me: “So true! You know, I was running at 5am in my neighborhood this morning, and there were others out exercising too; we would wave as we passed each other, and I thought, ‘I wonder if people are this friendly anywhere else at 5am?’”

He: “Yeah, everyone’s much nicer in Nashville.”

The band met though their involvement in their high school’s music program; what initially began as an acoustic project between Niedhardt and vocalist Cory Brent, has evolved into a full band that is anything but acoustic these days.  While the guitar and bass positions generally have a rotating roster of friends, Niedhardt, Brent, and drummer Matt Ruggiero are the constants: “I’m more of the dad of the band, and Corey’s like the mom, he worries about everyone else.  I do a lot of the booking and tour logistics, I make sure everyone gets everywhere on time.  Corey makes sure everyone gets along and has fun,” says Niedhardt, and adds with a laugh, “Matt, our drummer, is always down to do anything.”

Known for their energetic shows and playful senses of humor, the crew has had the time of their lives on tour:  “It’s our favorite part; I know a lot of bands who go on tour and end up hating each other, but everyone in this band is such good friends.  Everyone is always down to have a  good time, we don’t ever really get into arguments or anything,” explains Niedhardt.  “When we go on tour, it’s like three weeks of the having the best time you’ll ever have with your best friends.  We try to focus on being as tight as possible and as energetic as possible.  I definitely drank more Red Bull than anyone ever should on this tour.”  When I ask Niedhardt if the band has thought about asking Red Bull to sign on as a sponsor, he laughs and says, “That might the best/worst thing that could ever happen.”

On one leg of the journey, the boys had their first experience with an unappreciative spectator, but they were unfazed:  “We had our first show heckler in Birmingham, Alabama; in between songs we were talking, and this guy sitting at the bar just yelled at us to shut up and get off the stage.  I was like ‘this next song goes out to our good friend at the bar.’ We ended up playing a couple more songs, and in between I would ask ‘how’s our friend at the bar doing?’ Niedhardt says with a chuckle.  “He actually ended up apologizing and being cool about it.  It was funny.”

This band has fun, and it comes through in their music, which draws a wide variety of show attendees; “We have a wide range of different audiences.  Where we’re from, our fans are mostly high school and college-aged.  We played in Georgia, and the fans were even younger.  We played up in Boston, and we had a lot of 25-30 year olds in the crowd.  It just depends on where we are.”

I’m sure Reckless Serenade will be tearing up highways again soon, so don’t miss your chance to see them when they come to your neighborhood!