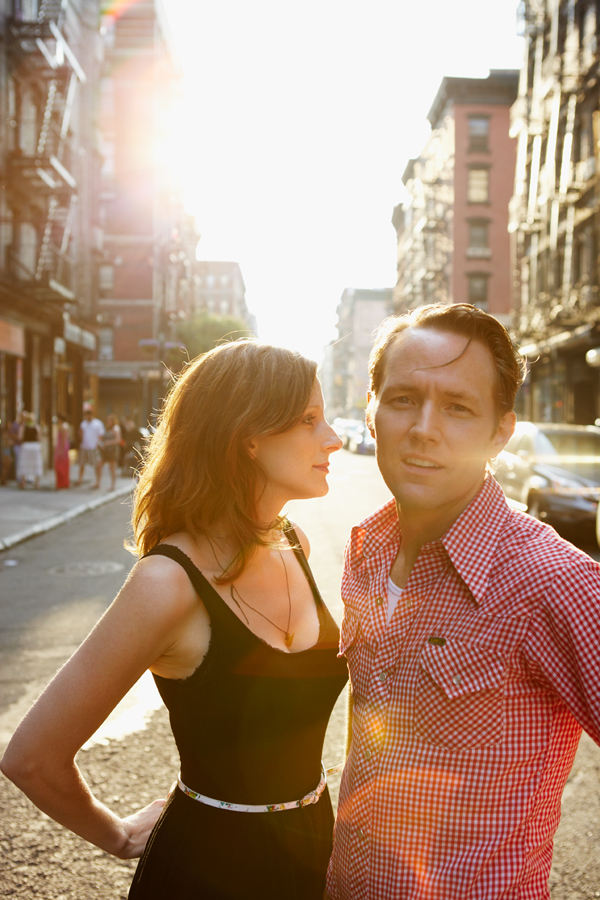 Eclectic Canadian outfit Whitehorse, comprised of husband-wife duo Luke Doucet and  Melissa McClelland, will be appearing at The High Watt in Nashville on December 19th.  The band has been touring in support of their latest album, Leave No Bridge Unburned, which was released in February via Six Shooter Records.

“Eclectic” is the perfect word to describe what this band is about; the sound of the new album is bit of a departure from their previous, more folk-y sounding material.  Some call it “country”, some call it “Americana”, and some have even called it “psychedelic Spaghetti western”.  “I’ve always found that kind of funny, geography has a lot to do with that we call ourselves, and what other people call us.  Some people call our music “country” if we’re in Canada.  If we’re somewhere else we might get called “rock n’ roll”, or we might get called “folk”.  I think that what happens is this, we’re a duo and we grew out of the Americana world,” explains co-founder Doucet.  “Melissa and I have made singer/songwriter records–I despise that term and apologize for even using it–we were solo artists and occasionally our songs were presented in an acoustic guitar format.  The Americana community was the community that adopted us, and that’s great because so much quality music slips under the radar and resides in that world.  There’s some stuff on this new record that sounds western and sounds like rock n’ roll, there are elements of the blues.  Somebody put it really well not long ago, they said the influences that define our music tend to be pre-Beatles.  The basic ingredients of this band—when it’s the blues, it’s the blues from the 1950s and earlier, when it’s country music, it’s Hank Williams and Johnny Cash, Patsy Cline, and if it’s folk music, it’s like the sound happening in the 1950s.”  You can describe what they do using whatever combination of fancy adjectives you can string together; I’m just going to call really dang good, y’all.

“There’s a real alt-country sensibility that’s permeated Toronto since the 1980s,”says Doucet, who adds that Whitehorse is part of a supportive and strong Americana community in their homeland.  While the duo is proud of their Canadian roots, they have a reverence for all things Southern, a fact which is reflected in the title of their forthcoming  EP of classic blues covers, The Northern South Vol. 1, in which they take the music of legends like Robert Johnson, Bo Diddly, Chuck Berry, and Howlin’ Wolf, and put it through what Doucet refers to as “the Whitehorse machinery.”

“Southern culture and southern music is pretty interesting, no matter who you are or where you’re from,” he says.  “All you have to do is look at the fascination that Europeans, particularly the British and the Dutch, have with American roots music.  They take it very seriously, and I think the reason for that as American culture, and by that I mean Canadians too, has become more plastic, and impatient, and less authentic, and less genuine—as opposed to our heyday when everything was made by hand, and elbow grease was what got most things done. Now everything is manufactured in China and our culture is impatient and fast.  Europeans have always had admiration and a fascination with the heyday of American culture; they look at roots and Americana music as the last bastion of American folk art.”

We frequently and easily toss around the term “artist” when describing those who make music, but Doucet and McClelland are the real deal.  The “Whitehorse machinery” is a sight to behold–“Our live show is about making loops, as well as the intimacy between Melissa and me; I’m playing drums and she’s recording me, then I stop playing and she adds a keyboard part, we add bass and record it, then we pick up guitars and sing the songs,” Doucet explains.

The pair’s creativity and songwriting prowess is on full display in Leave No Bridge Unburned; Doucet admits the album has a certain dramatic flair.  “We go for the epic.  We tend to create characters that are at the same time, hero and anti-hero, you’re never sure if they are the antagonist or the protagonist, which was deliberate.  We’re just trying to tell stories that are compelling, that was chief for us. The stories aren’t necessarily true either, the truth can be overrated; anybody can write a memoir, like if you’re just telling the truth, ripping pages out of your diary and regurgitating them in a more floral way.  A real author is somebody who can write fiction, you have to actually be creative and come up with something that isn’t just in your history,” he says.  “It’s a fairly dramatic title for the record too, and its speaks a little bit to that sense of post-apocalyptic malaise or existentialism;  it wouldn’t be an exaggeration to say we live in a time when we are ever cognizant of our mortality—there’s diplomatic unrest, there are environmental catastrophes around every corner.  We have a preoccupation with our own existence, I find that compelling.”

Don’t miss Whitehorse with Jake McMullen at The High Watt on December 19th; tickets for the 18+ show are $15.  Doors are at 8pm, and the fun starts at 9pm.

Get a little taste of the “Whitehorse machinery” for yourself: