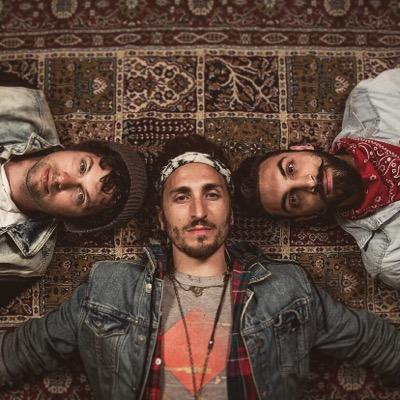 “I didn’t grow up listening to folk music, but over the past seven or so years, I’ve been more and more drawn to it,” says Austin Bisnow (a.k.a. Austin Bis), frontman of Los Angeles indie folk-rock group Magic Giant.  Several years ago, Bis, a multi-talented pop songwriter and producer who  has written and produced songs for artists such as David Guetta (“Listen”), Steve Aoki & Moxie Raia (“I Love It When You Cry”), and Paul Oakenfold (“Who Do You Love”), and has collaborated with a long list of superstars that includes John Legend, Akon, Aloe Blacc, Diplo, and Adam Levine, decided he wanted to start jamming with players in the folk music scene. “It was a long process; Zambricki [Li] and I were in an old band and Brian [Zaghi] and Ian [Meltzer], who we played with on drums, were in an old band, and we combined forces. Zambricki plays fiddle and banjo and harmonica and mandolin, I was just enamored. He’s really talented.  Then we started writing together; at the time, I was writing songs for other artists in the pop world. I’d written with hundreds of other writers, but for some reason, our chemistry was just really great.”

The boys are now known as Magic Giant, a band that is approximately 20 months young, and they’re blowing up–since February, the group has toured all over the country (except to the South, but we’re waiting patiently), made stops at festivals like SXSW (where they played 13 shows in 8 days, no big deal), and performed for yoga classes.  That’s right. Yoga classes. “I’ve been doing yoga for a while, it always gives me peace of mind.  After I finish a class, I’m so relaxed, my head is so clear; otherwise I’m running a million miles an hour, so it’s nice to slow down, and it’s a crazy workout,” explains Bis.  “We were slated to play a festival in Colorado, and this yogi, Gina Caputo, she’s really incredible, she’d seen us at Wanderlust, and loved us.  She asked if would play live music during her yoga class at Arise in Colorado, and we said, ‘no, we don’t know how to do that, that’s not what we do, we play on stages.’  She said, ‘trust me, you guys will be incredible at this, just give it a try,’ so we decided to give it a whirl.  It was one of the coolest thing we’d ever done musically.  When you think of yoga, you think of like, I don’t know, ten people.  This class was 300 people under a tent overlooking a lake, and we had a full-on sound system with a sound engineer, our entire rig, everything. We started out mellow, and by three-quarters of the way in, it was a full-on raging dance party. I sweated harder than I ever had; there were 300 people all fully present and fully engaged, it’s not something we could’ve planned.  We had no idea what to play, and we ended up playing ten-minute versions of our songs in free form—organic, super mellow, instrumental, the whole spectrum—then it was an eruption.  We did it all based on the energy and the movement of the class.  It was so cool.  Now it’s something we really really like doing.”

The band is hoping to release their EP early next year, which they recorded in a bomb shelter.  That’s right.  A bomb shelter.  “Zambricki was house-shopping, and he found this place and bought it; it has this 1940s bomb shelter in the backyard. First of all, it’s really rare for places in L.A. to have basements, let alone bomb shelters.  The owners of the house didn’t even see it as a perk.  As soon as we saw it, we were like ‘oh my gosh, this is perfect.’  There was no ventilation, there was no electricity.  Brian is good at working on things, so he brought in electricity and ventilation to get fresh air down there, and with a couple of friends, converted it into what’s now our studio and rehearsal space. It’s really cozy, like a womb or something,” laughs Bis. “We recently shot a live video there, for our new single.”

The band has released a new single, “Set On Fire”, which will appear on the forthcoming EP; the song is a glowing display of the delicious concoction that is Magic Giant—pulsing banjo rolls coupled with Bis’ buttery tenor, made complete with tribal-esque percussion, resulting in a fist-pumping, head-bobbing anthem.  If you go see them live, be prepared to move; “At our shows you’ll see a lot of smiles, a lot of dancing, a lot of singing.  There’s a lot of participation.  They aren’t just spectators, they’re involved. Sometimes we’ll go to places and the crowd is colder, they haven’t heard us before, their expectations are to be unimpressed.  By the middle, they’re going nuts.  We like seeing them having a good time and expressing themselves, stripping away the self-consciousness of everything, and being like a kid again,” declares Bis.

This whirlwind of a schedule doesn’t faze Magic Giant. “The music is so fun, we could be tired or stressed or having a bad day, and the music starts and everyone just changes.  As soon as we hit the stage it’s like ‘ahhhh this is amazing!’  it’s the best thing ever.  We stay pretty mellow, we don’t drink really or party,” Bis explains. “The music is enough.”

One thought on “An Exclusive Interview with Magic Giant”