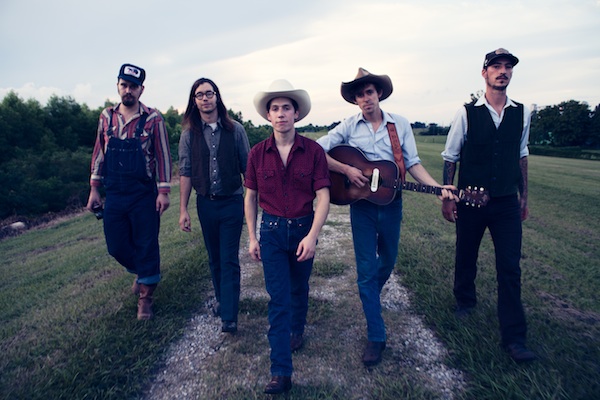 “You don’t really know where you’re from ’til you leave, you know?  Living in New Orleans for the years we have, you don’t realize what all you’ve learned until you leave and do it different places,” says Missouri native Riley Downing, frontman for five-piece band The Deslondes, on their adopted hometown.  “It’s definitely got its own flavor.  New Orleans gives you the freedom to play without the worry of ‘making it’.”

An amalgam of Western swing, rockabilly-esque R&B, and traditional country, The Deslondes’ style is as much of a melting pot as their hometown.  Even so, blues, Dixieland jazz, and zydeco are what come to mind when one speaks of music from the Big Easy, not necessarily traditional country, but The Deslondes have carved out their own unique spot in the music scene.  “There’s a little niche for our kind of music there now,” explains Downing.  “Over the last five or six years, a bunch of us would get together and play country and western covers, which has now turned into the ‘All-Star Covered Dish Country Jamboree’ every Tuesday night. Everybody brings food, there’s an auction, there are country bands from all over the world who come and they get a chance to play in New Orleans; a lot of people go to dance, the whole room starts moving. It feels like the best show you ever played.  I look forward to it every Tuesday.”

The members crossed paths years ago at the Woody Guthrie Folk Festival held yearly in the legend’s hometown of Okemah, Oklahoma. “I went from Kansas City to the festival, and they just happened to be there,” Downing says, adding, “That happened again for about four years, we’d all end up there at the same time every year.  One year when we were there, Dan [Cutler] and Sam [Doores] had just started up this band and invited me down to New Orleans, and we went from there.  Cameron [Snyder] and John James [Tourville] ended up joining later, and that’s when it felt complete.  Our original band name was The Tumbleweeds, but I think one year we played a festival and there are three other bands with the name The Tumbleweeds, so we figured it was time to pick a different name. ‘Deslondes’ is the name of the street Sam, Dan, and me lived on.”

This June, the quintet released their self-titled debut album, twelve shimmering slices of rootsy goodness that will make you want to grab somebody and two-step your way across a dusty dancehall (and if this album doesn’t have that effect on you, you should probably check your pulse) via label New West Records.  The band recorded the record at Andrija Tokic’s  famed analog studio The Bomb Shelter in Nashville.  The Deslondes met Tokic at East Nashville venue The Five Spot; “He was doing sound that night, and knowing him like we do now, he never has time for stuff like that, so if that wasn’t fate, I don’t know what is,” recalls Downing.  “He invited us to his house the next day and showed us his recording gear; we’ve been recording with him ever since.  He’s become like family to us.  He has a good attitude, good momentum.  He knows when to push you.”

The Deslondes have been on tour recently with The Devil Makes Three, and will head out for more dates with blog favorite Pokey LaFarge. “That’s one band I never get tired of watching.  They’re one of the best bands out there right now,” Downing declares.

Be sure to catch The Deslondes live with Pokey LaFarge, and keep your eyes and ears open for some new singles to be released this winter!