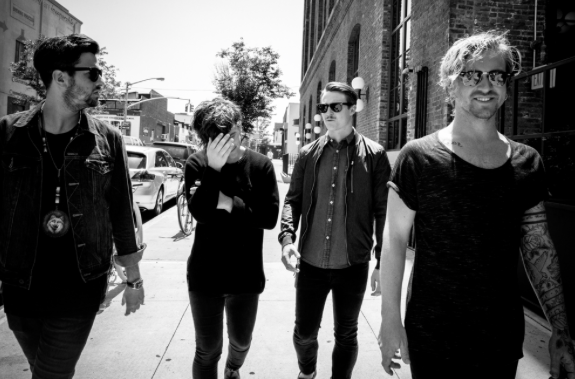 It’s been an whirlwind of excitement and success for Australian indie rockers The Griswolds since the release of their debut album, Be Impressive, last year. The fantastically frenetic foursome has torn up the American highways, playing shows and festivals from sea to shining sea with bands like Walk The Moon: “We’ve gotten to play some awesome venues, which never ceases to excite us. There are other times–waking up in a hotel room at some ungodly hour to drive some crazy distance to the next city, that’s sobering,” says drummer Lachlan West. “Being on stage and making new fans, making what we do come across to other people, that’s what gives us the energy to keep doing it. Playing Firefly Festival was a big thing for us.  The year before, we played on one of the tiny stages really early in the day, we didn’t expect anything, but we had a good crowd.  This year, we played on a bigger stage in a better time slot, and we walked out to 10,000 plus crowd–the largest crowd we’ve ever played to.  Looking back on that, that was my favorite part of the year.  It’s funny though, it wasn’t until after that I enjoyed it, while playing the set, I hardly got to look up.  Afterwards, someone showed me a photo of the crowd, and I was like ‘Oh wow! Who was that for?’ and they were like, ‘That was during your set!’,” recalls West.

The band has had its share of fun along the way; “I’m not too sure how much of it I should release out into the world, I don’t want to get in any trouble!” says West. “Touring with Walk The Moon was great, we ended up becoming great friends; the normal tour shenanigans would happen.  Let’s just say that the tour ended in Vegas.  You can imagine what Australian boys get up to in Las Vegas.”

Speaking of Australia, it seems that the country is bursting at the seams with musical talent these days.  There must be something in water down there. “There’s definitely something in the water. I think it’s beer.  Everyone parties in Australia,” laughs West.  “It’s been a great couple of years for Australian music.  I really think it’s helped that the internet has become a way for people to find music across the world.  That’s the only way we got discovered in America, we put our songs on sites like Bandcamp.  Before that, bands had to mail their records or tapes to agencies, labels, and venues in America, and for an Australian band to make it anywhere in the world, especially in the U.S., was a huge thing.  Only a few had done it, like INXS, bands like that.  There’s a really hard work ethic in Australia too.  We idolized the Australian bands who made it out of Australia, and we hoped to be one of those.”

The Griswolds are currently on tour with Andrew McMahon In The Wilderness and New Politics, which will bring the star-studded house party to the Music City this Thursday, November 12th.  “Andrew’s fans are a slightly older crowd than we’re used to playing; we have a lot of teenage fans which is awesome because they go crazy, all you have to do is say the name of their city.  It’s been really interesting playing to a crowd that you have to win over.  We’ve enjoyed it! Hopefully we’re winning them over,” West says.  The group will be teaming up once again with friends Walk The Moon for a nationwide tour of Australia and New Zealand in the new year. There’s also new music on the way, even in the midst of their insane touring schedule–“We’re working on a new album now, trying to finish up some songs.  We’ve found it’s easy to start songs while we’re on the road, but it’s hard to finish them.  We’re going to record early next year, and  we’ll release it sometime next year.  We’re not staying sane, but that’s how we like it.”