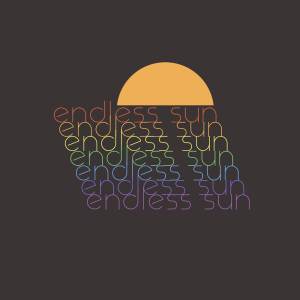 Siblings Derek and Erika Porter are the heart of Nashville folk/pop-rock four-piece Pageant, whose beautifully-crafted seven-song sophomore EP Endless Sun is set for release on CD and digital formats on Friday, November 13th.
Lead singer-songwriter Derek Porter’s rich, pointed vocals and guitar intermingle with his sister Erika Porter’s lilting vocals, guitar, and ukelele to create a lush call-and-response of moving and playful music. Additional songwriting and instrumentation from Stephen Allbritten and Nick Frampton (Field Division, The River Monks) rounds out the lineup to create a compelling blend of stomping guitar rock, piano-based indie pop, classic country, and 50’s girl group pop. Working out of their own Best Friend Studio in Nashville, Pageant employs loop pedals and sample pads to build and refract sounds discovered in the moment with their traditional acoustic instruments, developing an interplay between organically- and technologically-produced sounds. Hiding beneath a slick veneer of catchy hooks is a melancholic ethos where bright, poppy verve meets thoughtful reflection. Endless Sun reflects the Porters’ desire for balance. As Derek says, “I was picking at what I see as a dichotomy of everyday life where we often feel like we want the best ideal version of something – the weather, a relationship, a new car, whatever – but by desiring that, we miss the unspoken benefits of it’s opposite – the rain, a bad relationship that can be educational, an old beater that we learn to fix up.”
Pageant will be celebrating the release of the EP with a show at Left Plus Right Studio in Nashville; Kyle Cox, Brother Sister Stone, and Brian Revels will be opening support.  The show begins at 7:00 p.m., and tickets are only $8.00!

To tide you over, East of 8th is proudly presents a sneak peak of Endless Sun in its entirety a day early: