Progressive rock band The Dear Hunter has recently released Act IV: Rebirth in Reprise, the fourth of a six-album series about the birth, life, and death of a character called “The Dear Hunter;” Act III was released in 2009, and there was constant inquiry and speculation from fans about when, and if, Act IV would be released.  “People have thought it’s the last one, I assume it’s because it took so long between the third and the fourth.  It’s exciting to have it out,” says frontman Casey Crescenzo, who admits finishing the album was quite a relief: “I was relieved.  Very relieved, definitely.  It was the kind of thing where so many people had been asking ‘when is it going to happen?’ for so long that I started to doubt that it ever would, and from time to time I started to feel really self-conscious about the possibility that I was a liar, that I said I would do these things, that I had committed to this big project, falling out of love with it at certain times, and feeling like I could never do it.  So when I finished it, and the entire band was perfectly right there with me for every step, it was a relief in the most non-egomaniacal way.  The affirmation of that project, the reinvigoration of the passion that started it, and not just the paint-by-numbers it could be if I was just trying to get it done to get it done.  The right inspiration was behind it.” 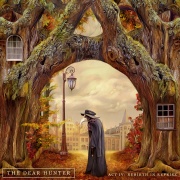 union between the theatrical and rock n’ roll.  While the band doesn’t have an orchestra with them on the tour, you’ll definitely have a unique experience at their live show:  “For the most part, we recognize the difference between the live experience and the experience of just tuning out and diving into a record.  There’s a energy that you can accomplish in a live setting that’s not necessarily there on a record, at the same time you want to represent the recording in the best way that you can, so for the most part, we’ve found ways to portray the music using the instruments we have; it’s a more minimized version of the orchestral, but we accomplish it in the best way that we can,” explains Crescenzo, adding, “I think our audience is very invested; there obviously will be people who could care less what the overarching story is on these records, but the large portion of our audience is more and more interested in the evolution of the story and interplay from record to record and the things that are shared. There is on a certain level, a required interest, but I also believe that if you’re not very interested in that side of things, you can just enjoy the music and take it at face value.”

The band is on a nationwide tour at the moment, which Crescenzo says is “going way better than expected.”  He’s also excited to come back to Nashville because he gets to visit his favorite coffee shop, Crema,  and enjoy a bowl of their “hipster grits;” “That’s my favorite coffee in the country for sure.  I love it there, specifically this breakfast couscous, some kind of grain, like the equivalent of some kind of hipster oatmeal and fruit.  It’s awesome, and the coffee is always so good.  I’ve been there so many times that I really crave it and need to get back there.”

As for the rest of the tour stops, Crescenzo says, “For the most part we keep our expectations pretty low, and it seems to work out because every night we get to be surprised.  You never know, especially for us.  We’re going to places we haven’t been to a lot, and were selling out, which is ridiculous, it’s exceeding our expectations.  We’re not jaded, but we’ve been everywhere.  We’re trying to go back to the things we like to do in every specific place.  We’re touring on a new record, and the response has been so positive, every single show has been a unique and positive experience.  There’ve been some night where we’ve been extremely excited to go play shows, and there’ve been some where we’re extremely curious about how the night’s going to go, but it’s really been so overwhelmingly positive.  For us, it’s not about exploring every city so much anymore, it’s more about revisiting places we know we love, and trying to take the time to go and do these things that we really enjoy, and having that confidence that the show is going to be a really great experience.”