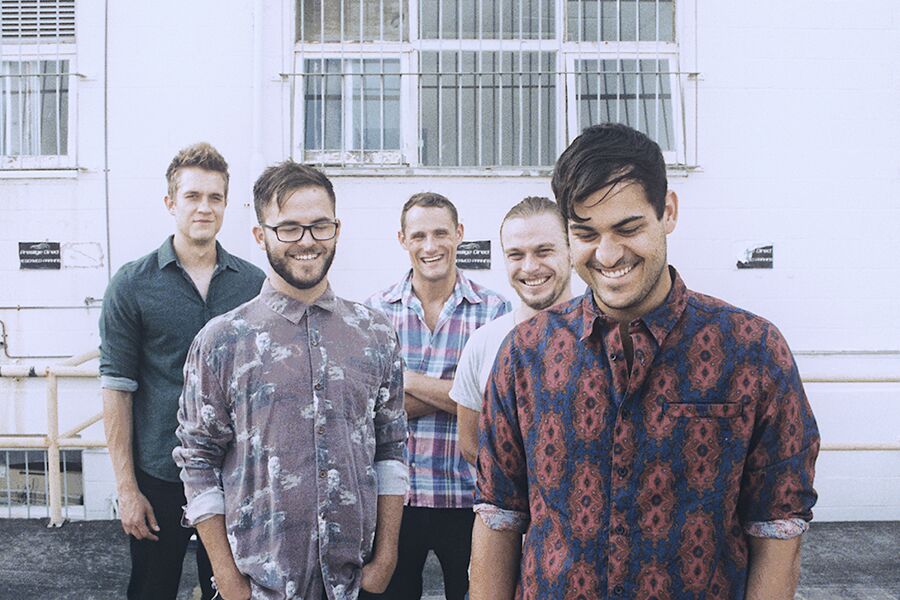 There must be something in the water in Australia; there are so many fantastic bands coming from Down Under, it’s making my head spin.  The thing is, they’re all doing something unique and different, and I really just can’t get enough.  Syndey-based indie pop purveyors Bad Pony, who released their debut EP Limbo yesterday, are the real deal; a drum-centric quintet with an infectiously catchy sound that exudes energy and injects fun into the atmosphere, they’re definitely a group to keep on your radar.  Frontman Jarred Young was kind enough to answer a few questions just for us, beloved readers.  Enjoy!

East of 8th:  How did you get together to form Bad Pony?

Jarred Young:  Sam and I used to play in a bluesy rock band together. I played drums and he was (and always will be) a shredder.  I never used to sing, but whenever we would be at a party and there was a guitar and I’d had enough liquid courage, I’d sing a few ditties. Sam heard something he liked in my voice and encouraged me to keep singing in the daylight hours. We recorded a song together (‘Sucker’) and through emailing it around the song ended up in the hands of a touring company that recruited us for a month long tour. We then had to put together a band and selected our best and most talented buddies with the idea of having a band of singers and multi-instrumentalists.

Eo8:  Jarred, tell me about this deconstructed drum kit you use…what inspired you to ‘do drums’ this way?

JY:  Haha. we do drums SO wrong. Sam (Guitar) plays kick drum, I play basically the top half of a kit (floor tom, snare, crash cymbal and mini hi-hats) and Isaac (Keys) and Mark (Bass) both play floor toms and tambourines. We used to have a conventional set up but had a hard time holding down drummers. That and I’m dreadful at guitar, that was never a good idea! So we put Sam’s and my own background as drummers to use and slowly added the other bits and pieces.

Eo8:  Your debut EP “Limbo” came out on October 1st; can you tell us about the making of the EP?

JY:  It is indeed. We’re very excited. It was completely produced, mixed and mastered (except for ‘Down To You’ which was mixed by Malcolm Besley of Northeast Party House) by our very own Cron Van Niekerk & Sam Thomlinson. They’re very talented dudes and I’m super proud of what they’ve done. It was a long process of um-ing and ah-ing over songs, recording, re-recording and re-writing but I’m so relieved to have them out! It’s a pretty diverse mix of songs but they’re also somehow cohesive and sonically distinctive of us. I’m a bit nervous but can’t wait to hear what people think of it.

JY:  We’re pretty happy dudes. We want to have fun and laugh and dance and have the audience do the same when we play live so we usually tend to write in a style that will let us do just that. We like writing pop tunes with little quirky instances strewn across them. That’s a pretty broad mission statement but it allows us a fair bit of freedom which we like.

Eo8:  What’s your favorite thing that’s happened to you/for you as a band so far?

JY:  This whole music thing has completely shaped who we are as humans. We wouldn’t have seen as much of this beautiful country (and others) and met the most amazing people if it wasn’t for music. It really does bring people together. We were recently up north in Brisbane for Bigsound (our version of SXSW) and we ran into our musical friends from all over the country. Everyone just came together and it was like having a massive family reunion.

Eo8:  There is so much amazing music coming from Australia these days (Bad Pony of course included); I’ve heard the various scenes there can be a little rough and extremely competitive.  What do you feel makes you stand out from the rest?

JY:  You’re too kind! It is very competitive, we have so much great music coming from such a tiny population. In saying that though, Australian artists are generally very supportive and friendly. Our live show really sets us apart. Our weirdo percussion set up really influences the way we arrange songs and you can tell from our live show that we are totally ecstatic to be doing what we do, and doing it the way that we do it. Our songwriting is pretty unique too, in that we cover a fair few genres without compromising the distinctiveness of our sound.

JY:  We’re the only country that eat our national emblems (Kangaroos and Emus). I don’t know if that’s the best thing but it’s definitely weird. I feel like having an Australian accent is similar to having a ‘get out of jail free’ card in some parts of the world too. That’s pretty great. The worst thing about being Australian is that all the animals that exist here are designed to kill you.

Eo8:  This question may be premature, but I can’t resist…do you think you’ll come tour the states at all? Pretty please? I’ll be your best friend!

JY:  The only thing holding us back was not having a best friend over there so now we’re sorted! In all seriousness though, we would love to and will get over to the states as soon as humanly possible 🙂 Perhaps next year.

Eo8:  This album art is the business! Will it be on a t-shirt at some point and will those of us on the other side of the globe be able to purchase it soon?

JY:  Thanks very much, it was done by a very talented friend of ours, Caitlin Platt. We are waiting on t-shirts to arrive, but we have a few other goodies available in our merch store: http://badponymusic.bigcartel.com/