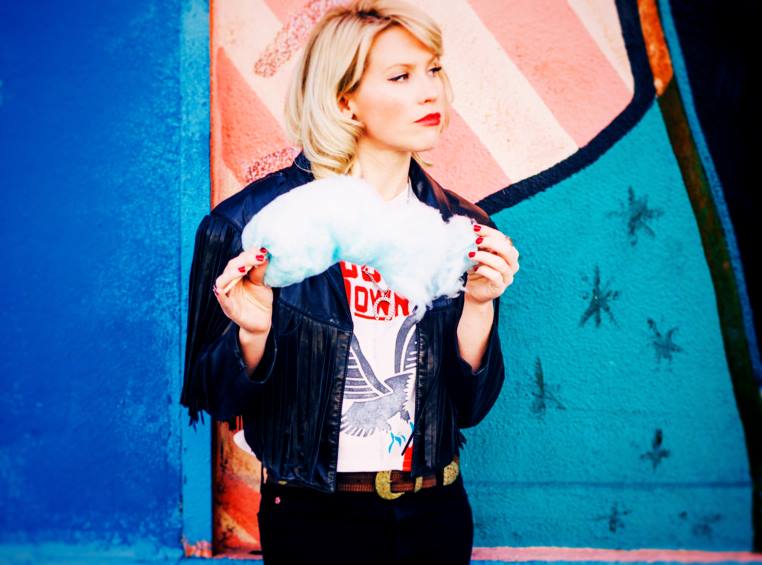 Singer/songwriter Marchelle Brandanini, a.k.a. Pony Boy, grew up in a town in northern California called Vacaville, a name which literally means “Cow Town.” Her hometown was small, but close enough to San Francisco that she could study classical music and opera.  One day, she heard the raspy roar of Janis Joplin, thought “Wow! I want to sound like that!” and at the ripe old age of 10, took an oath to become the female version of Tom Waits.

Marchelle, ready for a change from the super structure of classical music, traded in Puccini for punk, and signed on for a liberating stint as a punk singer.  Eventually, she decided it was time to become a responsible adult, and set off for college in southern California to study politics; Marchelle ended up in a class with “some of the music school freaks” who inspired her to once again consider joining a band, and, to the delight of her family (jokes y’all, jokes), found her way back to music.  She admits that while her traditionally-minded parents were not initially excited about her musical pursuits, they’ve come around.  “I had moments in the past where my whole goal was to be free and swear and have a drinking contest with the audience; it wasn’t necessarily the most commercial operation.  Even now, my grandmother will ask me, ‘can’t you write a song that someone isn’t murdered in?’ and I’m like ‘no Grandma, I can’t.'”  Bless her heart.

Initially, Marchelle, who by this time had decided to go by the moniker “Pony Boy,” a nod to The Outsiders and a confession that she has felt like one at times, came to Nashville specifically to record an album with local music-makers Adam Landry and Justin Collins; “I didn’t even know them, I’d just heard a record by T. Hardy Morris called Audition Tapes and it was great, a singer/songwriter record that was done in a really badass and unapologetic way.  It wasn’t precious or self-serious.  I thought, ‘I don’t know where this record was recorded or who recorded it but I have to find them.’  I sent a blind email, and that was the start of a great friendship and collaboration.  Recording the album was all about the performance, not the perfection, or getting the best players, it was music boiled down to its most primal form.”

On August 28th, she will release this debut LP, called Blue Gold, which she describes as “looking at California in the rearview 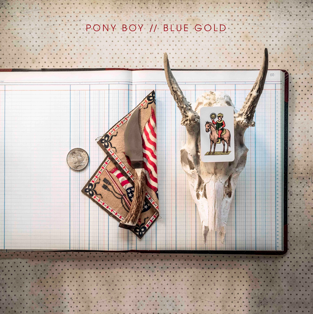 mirror.”  “California is a strange amalgam of people, things, and stereotypes. You can look at it and think ‘is this the worst place on earth or the most magical place?’ When I went away to Nashville, I got some perspective and was able to see more of the beauty, the pain, the heartbreak, everything I feel about California, and now I have some objectivity to write about it,” she says.

For Marchelle, the fun part of making music is the writing process: “I’ve always really liked writing, almost more than the musical part, that’s why I’ve studied disciplines from screenwriting to poetry to music of various structures and lengths, reading Leonard Cohen and Bob Dylan lyrics…I was always struck by their lyrics more than their performances, which were secondary to me.  Living in Los Angeles, where you have the ghosts of greats like Bukowski, and reading all of that, it really sprung my love for words.”  She tells me she has a special affinity for the last track on the record, “Pink Elephant”; “The last song on the record is really personal for me, it kind of wrote itself.  You know where that pink elephant is on Charlotte Pike? It’s like a used car parking lot with a massive pink elephant in it wearing sunglasses.  One day I was just looking at it and I got really sad when I saw these strip malls and mixed-use condos going up.  I thought it was something so crazy and particular that signifies Nashville, I hope it stays, even though you can’t always keep things from changing in life. I wrote the song about it.  It’s a quiet, acoustic song.  I really like it, it just kind of came out.”

Her collaboration with Adam Landry and Justin Collins has now become a record label they have christened Cosmic Thug.  I haven’t heard of many female-run record labels in town, and I was curious about her experience with it so far.  She says, “Music is such a commodity for some people; major labels have to produce records that will sell a lot and deliver quantifiable numbers.  For me, rather than trying to shop around to labels and trying to fit into a place, I thought, ‘ok, Adam has a studio and Justin produces.’  Instead of trying to fit into someone’s sonic box, and in the spirit of collaboration, we decided to make our own label.  We want to create a community of people who really care about the music.”

Marchelle has now made Nashville her home, finally “finding a community of people with such a welcoming nature.  I appreciate the people and the history and the city…you can feel the history here.  I love it more than any city in the world.”  There’s definitely a place for everyone here in the Music City.  No need to feel like an Outsider anymore, Pony Boy.

Come check out Pony Boy’s Blue Gold release show with Justin & The Cosmics and Lilly Hiatt at Nashville landmark venue The Basement on Saturday, August 29th; the 21+ show begins at 9:00 p.m., and tickets are $5.00.

One thought on “PREVIEW: PONY BOY ALBUM RELEASE at THE BASEMENT on 8/29/15”