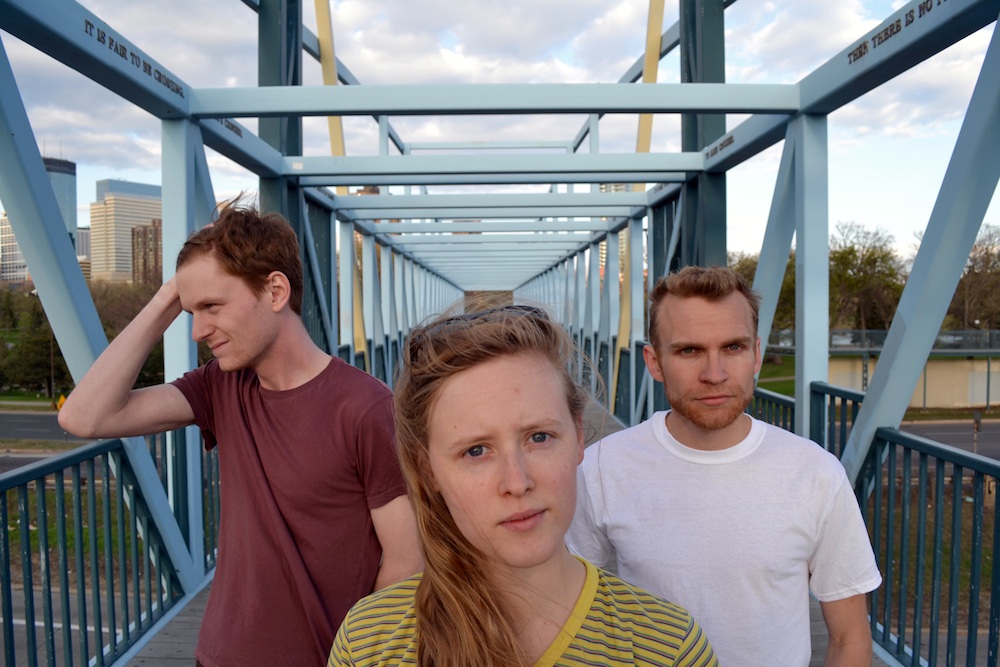 Indie rock trio Bad Bad Hats, comprised of Kerry Alexander (vocals, guitar, wisdom), Chris Hoge (drums, courage), and Noah Boswell (bass, power), are releasing their buzzworthy full-length debut album, Psychic Reader, this Friday, July 17th.  The band is from all over, but calls Minneapolis home; I recently caught up with Alexander, who was getting ready for the album’s release and making the most of Minnesota’s three weeks of summer (I’m kidding, there are probably at least five weeks of summer in Minnesota):

KA:  So I went to Macalester College in St. Paul, and I’d been playing music for a while, just like writing songs on my own, I played a lot of open mic nights in college, at a coffee shop near Macalester.  They have one every Sunday; there was hardly anyone in the audience, and most of the people who were there were trying to study, so I’m sure I was very annoying to them.  It was good practice for me.  I met other people who were writing and playing music while I was at college, I never knew anyone like that really before, all of a sudden there were all these creative people around me.  I wrote a song that I wanted to perform as a duet, and I knew Chris, who is now in the band, could sing and play.  We exchanged comments on Myspace music pages, and I asked him to sing on this song  From there we just kept working on music together.  Then we were ready to play our songs live; our friend Noah, who we didn’t realize played music, had bought a bass, and we asked him to join.  The rest is history.

Eo8:  Have you faced challenges as a female-fronted band?

KA:  Honestly, not really to my face, thankfully.  Minneapolis is kind of a great place to be a female musician, a lot of other local acts here are women, and they play big shows.  You see women everywhere and they’re doing great things.  I guess I do sometimes feel like my biggest annoyance being a women in a band is surrounding the critical responses we get; it’s so much more common to see women being written off as not being unique enough or being too similar to other women.  People compare you to other women in the scene, even when you don’t sound like them at all.  It does us all a disservice; a common negative comment about our band, and about other female musicians I’ve seen, is “oh great, the last thing we need is another indie band with a small-voiced woman.”  You’re made to feel like women should only take up so much space, like there’s not room for women to express themselves and play the kind of music that they’re writing, but that anytime a man picks up a guitar, that’s all he needs to do to be a valid musician and make music that’s worth making.  I know what I’m doing is meaningful and I know people respond to it in a great way, which is awesome.  If I can inspire one teenage girl, that’s all that matters, you know?  It’s hard sometimes though, when people make comments like that, the doubts start creeping in, “is my music not unique enough?” and things like that.  I feel like women have to try twice as hard to prove to people that what they’re doing is important.  On the other side of that, I think that’s why women are the future of rock and roll, because we’re forced to innovate and be twice as good.

Eo8:  Someone described your style as “a refreshingly rebellious approach with lyrics that challenge gender conventions.”  What do you think about that?

KA:  I don’t set out to write political or overtly feminist lyrics.  I try to write lyrics that speak to my experiences, and for me, as a woman living in the world, I do feel my experiences revolve a lot around certain strengths and certain vulnerabilities.  I think of myself as a somewhat fragile person sometimes; I think a lot of the album has to do with anxiety, and I didn’t really set out to do that, but that’s something I struggle with – dwelling on things and having doubts and worrying about what the right thing to say is, so a lot of my life revolves around those vulnerabilities and those fears.  At the same time, I’ve never been the kind of person to change for anyone else; I have so many strong female friends who inspire and influence me, and I think that comes through in the songs, too.  I didn’t set out to be rebellious, and sometimes I don’t feel very rebellious.  My goal is always to be myself and tell an honest story.

Eo8:  Your debut LP, Psychic Reader, comes out on July 17th; what was the creative process like?

KA:  Our EP came out in 2013, and that was a very “DIY” effort; when we recorded it, Chris and I were living in one of my professor’s houses over the summer while she was in Germany.  We had a lot more space and room to set everything up, and we recorded everything on the EP.  The songs were simpler, and the instrumentation was simpler.  When started working on the new songs, we thought we should do it the same way we’d done it before, because we knew what we were doing.  As we went along, we were working in our tiny apartment space; the songs were outgrowing us and our space and our recording abilities, but we kept trying to figure it out and chugging away.  Finally we decided we needed professional help, so we reached out to producer Brett Bullion, because we liked the work he did, and thankfully he responded.  Once we met him, we basically did the album in a month.

Eo8:  How has your music changed or progressed since 2013’s It Hurts EP?

KA:  I wrote the It Hurts EP when I was studying abroad, and I just had my classical guitar with me, so most of those songs were more acoustic and had fewer parts and things going on.  Once we started working on the LP, we’d been playing more live shows together, and when we play live, our set-up is all electric.  I used to play only acoustic guitar, and when the band started, that was my first introduction to playing with other people live.  Between the EP and the LP, I personally got more interested and comfortable with writing on electric guitar.  We also played as a four piece for a little while too, and that influenced how we wrote and arranged the songs.  it was a natural progression to get to the album; Brett, our producer thought using a synth could make things pop, and he was right.  He pushed us to expand our musical vocabulary.  I think we’ll be a four piece again when we play live, and we’re currently taking a break from playing shows so we can figure out how to recreate everything live from the new album.

Eo8:  There’s a rocking kazoo solo on your song “It Hurts” from the EP; are there any kazoo features on the new album (please say yes)?

KA:  There aren’t actually and that’s a big question for people!  It will be featured in shows though.  I love it.  Some people really don’t like it, but I stand by it.

Eo8:  Is there a particular song from the album that maybe resonates with you a little more than the others?

I think the last song on the album, “Spin,” was one that we wrote right before we started recording; Chris and I had been in a writing slump, trying to finish up some demos.  I had this idea for a song, and left it for Chris; he basically finished it without the vocals, and then i recorded the vocals.  It took two days.  It was like the rainbow after the storm.  The lyrics are some of my favorites too, because that song directly deals with my struggles with anxiety and mild hypochondria, like I’m not allowed to look at WebMD anymore because I scare myself, and it deals not only with my fears internally, but also explores how they are affecting the people I love around me.  It’s such a happy song musically, but the chorus is pretty dark, where it talks about how “I’d rather you die before me so that when I die, you already there waiting for me,” which is a terrible thing to feel.  It’s about wanting to be a happy and healthy person but not knowing how.  It’s the darkest and most emotional one, but I like it.

Eo8:  What’s next for Bad Bad Hats?  Is there a tour in the works, and more specifically, will you come to Nashville?

KA:  We’re planning a show for soon after the album comes out.  It’ll be a party.  My mom is very excited about it.  The three of us are from all corners of the U.S.; Noah is from New Mexico and he wants to tour out that way, Chris is from Connecticut so he wants to go out that way, and I’m like “we gotta go to the south” because that’s where all my friends are.  I’m sure it will be a battle, but we’ll hopefully tour, and I won’t be surprised if Chris wins and we head to the east coast.  I’m pushing for a southeastern tour in the near future.  I’ve only been to Nashville one time; my guitars are named Patsy Cline and Dolly Parton, and they would be happy to get to Nashville.

One thought on “8 QUESTIONS WITH BAD BAD HATS”