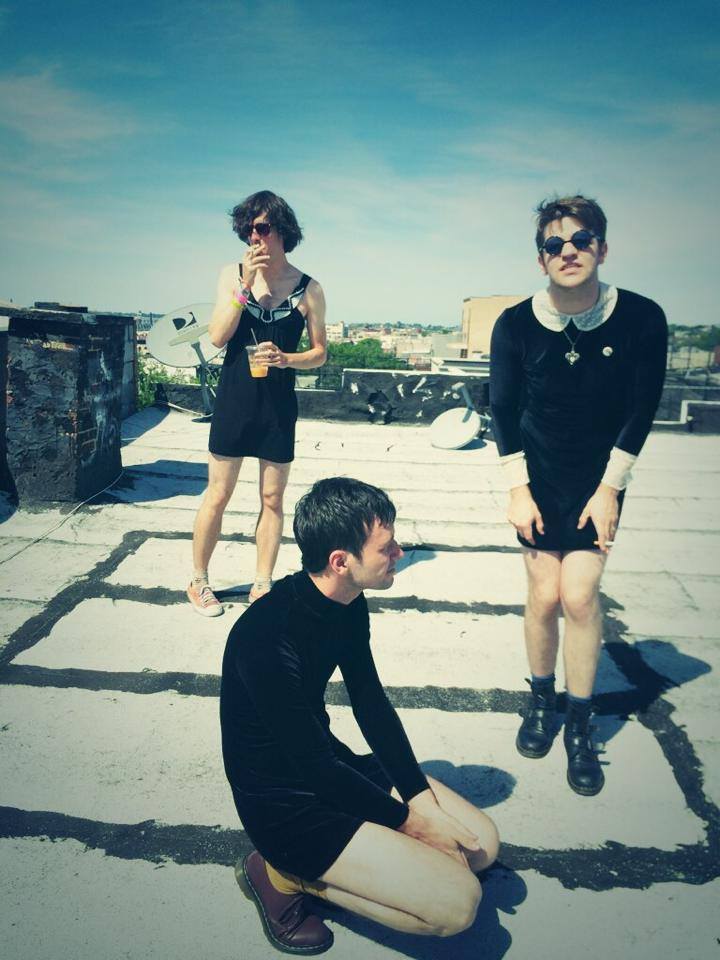 I recently caught up with Los Angeles-based pop band Heathers, comprised of Michael Francis (guitar, vocals), Thom Lucero (bass, vocals), and Michael Wegener (drums), who are currently on tour across the country and were in NYC for a show.  The band will bring their rowdy brand of 90s-inspired guitar-driven pop music to the Music City on Monday, June 29th at the Queen Ave Art Collective.

The guys told me they were a little road crazy, with a car full of trash and brains to match, but were kind enough to answer a few questions for you, beloved readers:

Eo8:  You lived in Portland for a while, moved to LA, and formed Heathers.  How did your experience in Portland shape you?

HEATHERS:  I (Francis) went to college in Portland, did all my coming of age there, got into a lot of music that ended up informing this band, like Pixies, Jesus and Mary Chain, My Bloody Valentine, a lot of 80s and 90s stuff.  I had a band in college, and it taught me valuable lessons about how not to be in band.

Eo8:  How did you get together to form Heathers?

HEATHERS:  I’d (Francis) written some songs and wanted to start another band; I got in touch with a friend who say’d he’d play with me, and he introduced me to Thom.  Another friend of mine from college who was living in LA introduced us to Mike.  We invited him to come practice with us, and we’d intended to play with a few drummers to see what felt right before we made any decisions.  Within 20 minutes of playing with Mike it was obvious that there was no one better.

Eo8:  You’ve been touring since early June, how’s that been?

HEATHERS:  It’s been an adventure.  It hasn’t been 100% fun all the time, but it’s been rewarding, traveling the country manually and seeing it from the ground.  Being able to stop in different towns and talk to people has been something we’ve always wanted to do.  People who have come to the shows have been engaged, it’s been nice to meet people who seem into what we’re doing, it makes the long periods of time in the car worth it.

Eo8:  You have a new song, “Tanker” out, it’s really dark lyrically…what made you write that song?

HEATHERS:   This doesn’t have anything to do with the actual lyrics, but I (Francis) woke up one morning to news that a gigantic gas tanker had exploded on the 2 in east LA, and I had the word “tanker” in my head all day.  I’ve also always been interested in songs that sound really bright and happy but have lyrics that completely upset your initial reaction to the sound of the song.  I had this image in my head about this dark obsession, and the way you turn it on its head is by sounding really bright and happy about it.  I don’t want to sound like a pretentious ass, but I’m going to; I was kind of thinking about the experience of reading a novel like “Lolita” where the subject matter is incredibly dark, but the language and prose are still beautiful, so you’re confused about how to feel about it.  It’s that middle space that I was really interested in I guess.

Eo8:  You have an album coming out in the fall sometime?

HEATHERS:  We have no idea when it will come out.  It is going to come out though!  It’s called Goodbye For Now, a 10-song LP.  We recorded it last fall.

Eo8:  I bet your live performance is pretty rowdy.

HEATHERS:  Yeah…Mike’s hair is usually flying everywhere, we’re all really sweaty afterwards, I tend to jump around and sing and scream.  Our plan is to not stand still, I couldn’t imagine playing our music in any kind of calm manner.  It comes from the heart and it shows.

Eo8:  What would you like to do while you’re here?