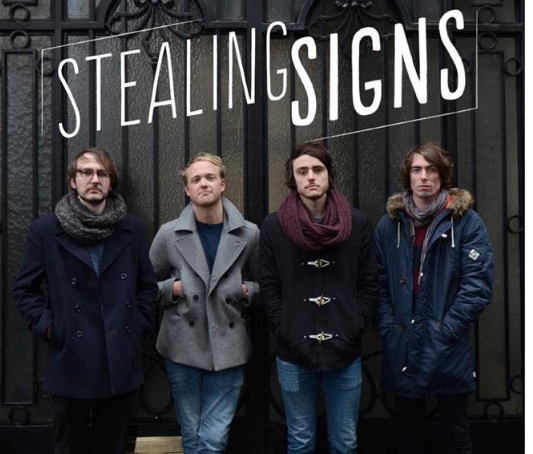 I recently had the chance to Skype with Nick Acton, frontman for UK alt-rock band Stealing Signs; I could tell we were going to have a good time when our conversation began like this:

Me: Where are you right now?

Nick: Well, how is your British geography?

Nick:  My American geography is just as bad, if not worse.  Where are you?

Me:  Nashville, do you know where that is?

Stealing Signs has a brand new single, called “Hide and Seek” from their forthcoming EP, which will be released on July 6th.  Read on to find out about the band, their antisocial behavior, and their love of beer pong:

Eo8:  Tell me about your band, and do you in fact steal signs?

NA:  Yes, we stole a lot of signs when we were growing up, and people were actually writing articles about it in the local paper.  It’s cheeky and rebellious fun, anti-social but not too hardcore, kind of like our music.  We’ve been together in our current format since last October, not a huge amount of time, but some of us were in a band together for a few years before that.  Now it’s a solid unit and we’ve never had so much fun.

Eo8:  What does everyone bring to the table, musically and personally?

NA:  Musically, Will, the drummer, is just crazy ridiculous on drums, and he puts so much passion and energy into it that it’s almost funny to watch him when we play live.  He’s a freaking wicked drummer.  George, our lead guitarist, is just an incredible guitarist, he’s one of those people who picks up a guitar and does something ridiculous with it that I would never be able to do, and he does it so casually, like it’s nothing.  Steve, the bassist, is a very tight as a musician, and he and Will work really well together, they really complement each other’s playing.  I just kind of do stuff on top of that and sing if I can, and play a bit of guitar.  I’m a background guitarist in a way.  Personally, we’ve been friends for years, since school, we’re extremely tight friends.  We’ve just been in Paris playing some gigs and we’ve come away from it with so many stupid inside jokes, we’re very much a band of brothers, happy to hang out as much as we play.

Eo8:  You’re from Essex, what’s the music scene like there?

NA:  We’re right next to London, but the thing is, London has a massive music history and pull, loads of venues, every pub has live music.  Whereas in Essex, it’s few and far between, but that kind of makes it better.  The handful of venues we have get a lot of people through the doors, regardless of when it is.  There’s a real community feel to the music scene in Essex.  Every band knows each other, there’s friendship, and we all go to each other’s gigs.  There are quite a few metal bands in Essex, but then there are the polar opposites, loads of singer/songwriters, and there are other bands like us too, but no one band is really the same, it’s really diverse.

Eo8:  What has inspired your sound?

NA:  When we first started, like a lot of bands, we were basically carbon copies of our favorite bands.  We were really into Bloc Party and Broken Social Scene, bands like that.  We sounded a lot like that, but over the years, we diversified, and we don’t really sound like those bands anymore.  If there’s a band we’re into, we might write a song that is inspired by that style; we’re all inspired by and are into different kinds of music, and it just ends up being a mix of styles and ideas.  “Hide and Seek,” for example, was inspired by a band called Little Comets; we played with them at a festival, but then George came in with a different Chili Peppers kind of style, and Steve added some Kings of Leon style, and Will added some Foo Fighter-y drums.  It’s all a happy accident.  It takes us a while to write songs, we’re not the kind of band that writes a song an hour before our set and plays it that night.

Eo8:  You have a single out now called “Hide and Seek;” when will your EP come out and what will it be called?

NA:  So the single is out on June 29th, and the EP comes out on July 6th.  It’s called, are you ready for this…Hide & Seek.  So yeah.  In the past, we used to name our songs ridiculous names that had nothing to do with anything that goes on in the song at all.  We had a song called “Tom Hanks” once, and there’s no mention of Tom Hanks in the lyrics or anything, it was because we thought the chorus was quite big, and we were like “Tom Hanks is in that film called ‘Big’ so we called it “Tom Hanks.”  Then we realized we live in a world of Google-searching, and no one could find our songs.  We called our single “Hide and Seek” because we repeat those words about a hundred times in the song.  We knew that was the single, so we named the EP that to make it easy for people.

NA:  There are three songs on the EP, but we’ve written a lot of songs.  We’re attached to a label called Hype that we’ve had a long-term relationship with who help us get our music onto advertisements, and the more songs they have, the more likely it is to get your song on t.v.  If we have songs we are really excited about, we tend to release them quickly instead of waiting to have a lot of songs for an album.  Our approach will be to get things out as much as we can, like one never-ending album.

Eo8:  You’re touring now? What else is on the agenda?

NA:  We’re playing a festival this summer that’s grown into a big festival, with bands like The Darkness; we’ve played it loads of times so now we get to headline; this year we are taking over a stage for the afternoon, and we’re putting on other bands to play on that stage with us.  We’re going to do a beer pong tournament on the stage too.  We’re pretty excited.  We just got off of a gig in Paris, we go twice a year, and then we’re going on a European tour.  We’re thinking about what the next single will be and where else we’ll go.  Our label is based in London, New York, and Los Angeles, and we’ve been asked to do SXSW, but we haven’t been able to do it for one reason or another.  It’s not out of the question though!

Eo8:  What else would you like my readers to know about Stealing Signs?

NA:  We’re playing a lot of shows, we full on love it.  All of our shows are energetic and really excited,  If anyone’s ever in the UK, come say hello or Facebook us or Youtube comment us.  We’re a friendly band.  If people come to our show, we embrace them.  Figuratively and literally.  We give nice hugs.