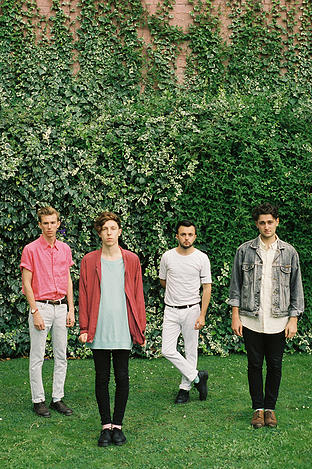 Upbeat four piece indie-pop band MARSICANS (pronounced MAR-si-cans) from Leeds, England, released a brand new single called “Gone In A Second” on April 18th.  Their sound often draws comparisons to bands like Mystery Jets, Arctic Monkeys, Little Comets and Vampire Weekend, and they count Bombay Bicycle Club, Paul Simon’s Graceland, Franz Ferdinand and the Beach Boys amongst their diverse influences.  The single is incredibly energetic and catchy; you definitely need to listen to this one!

When I heard the single, I went back to explore their other music, all of which is excellent.  I had to find out more about this band, because, y’all, they’re pretty fantastic:

Eo8:  Marsicans has an African-Congolese rhythmic kind of sound, how did you land on that sound/style?

MARSICANS:  Cale (Marsicans drummer, Matthew McHale) was part of a samba band in his younger days, so started to be inspired by percussion found in world music.  He brought it into the band as a suggestion.  This gelled nicely with singer James’ love for the guitar work of the South African musicians on Paul Simon’s Graceland, one of his faves.

Eo8:  You have a brand new single, “Gone In A Second,” that came out this month.  Can you talk about the inspiration for the song?

MARSICANS:  James wrote the lyrics after losing two grandparents, one after the other, but we were in the mood to write a loud, rowdy tune.  Both strands came together in this one.

Eo8:  The release of “Gone In A Second” coincided with Record Store Day, did you have anything special lined up to celebrate the release?

MARSICANS:  We played an in-store show at Jumbo Records, a great independent shop in our hometown of Leeds.  After that, we were going to party, but we had an offer of a gig we wanted to do in Newcastle so we headed straight off to play that one!  We love it. It’s all part of the fun.

Eo8:  I read that you’ll release the song in vinyl format, will it only be available in the UK?

MARSICANS: At the moment, the vinyl is being stocked by stores in the UK but some of these are mail order so it will available to whoever wants it.  We’ll deliver it by hand if needs be!  The digital release is worldwide, of course.

MARSICANS: There could well be!  But at the moment, work on a sparkling new EP is next on the agenda.

Eo8:  Does Marsicans have big plans for the summer?

MARSICANS: Write songs, record, write songs, go bowling, record, get a tan, write some more songs!  This summer we’re spending our time getting a whole stack of tunes down so that each person’s 2016 will be filled with a bit more Marsicans.

Eo8: Is there a North American tour in the works at all?

MARSICANS: Nothing is in place there yet.  We’re half way through playing a string of UK dates, so once that’s finished we’ll be looking into the future and deciding where to venture next.  A couple of us love the States from past holidays so it’s high on the priority list.

Eo8: Last, but certainly not least, what’s one thing each of you couldn’t live without?

Speaking of YouTube, check out the video for “Gone In A Second”: