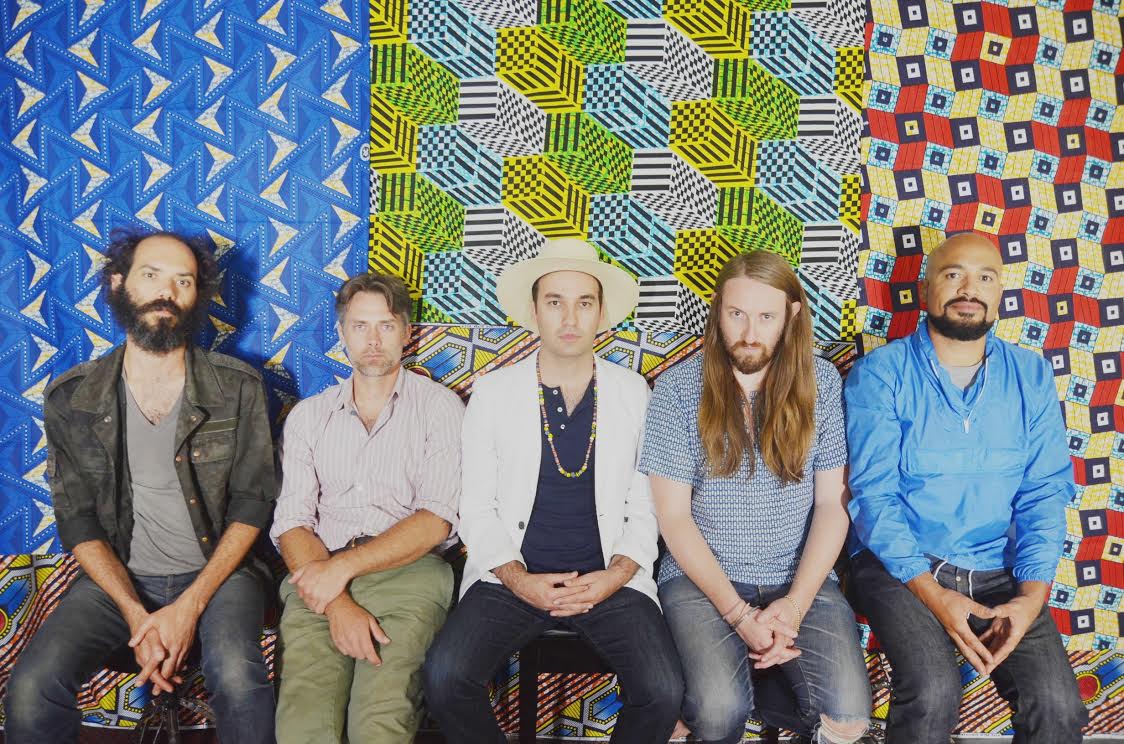 Los Angeles-based five piece afro/trop-pop ensemble Fool’s Gold is releasing their third studio album, Flying Lessons on May 19th, but you can snag one of 1,000 specially-pressed orange vinyl copies a month early on Record Store Day (April 18th)!  I had a chance to catch up with Lewis Pesacov (lead guitarist, co-songwriter, and co-founding band member) about Flying Lessons, France, and what’s next for Fool’s Gold.

Eo8:  I read where someone had written that Fool’s Gold isn’t an indie rock band at all; rather than playing American music with an Afropop influence, you play Afropop with a slight American influence.  Is that an accurate statement?

FG:  You know, I don’t know what type of music we play.  It’s funny, I was actually thinking about this the other day…once we were playing a show in Philadelphia at a small club, and afterwards this guy came up to me, he was super-stoked, bands always appreciate that from the fans, and he was like “man, I don’t know what type of music you play, but I think you play ‘future music,’ I don’t think it was meant for this time.”  It was a compliment that really stuck with me over the years.  It’s cool because it doesn’t really point to its influences.  There are so many genres now, you know, so I kind of liked that.  Another thing we used to call our music was “trop-pop.”  Truthfully, Luke and I definitely come from an indie background, it’s kind of flattering that that person would say that.  I feel like an African person would hear our music and not say that.  Also surprising, we’ve played music festivals with African artists and they always come up to us and say they can’t believe we play their music so well and are surprised because we’re white guys.  This new album has African influences, but there are lots of others there too.  Right now we just want to be Fool’s Gold, and try to find our own identity.  We definitely have African and Caribbean influences, but we’re also influenced by the Beach Boys, so hopefully at some point it kind of becomes your own identity.

Eo8:  I know Fool’s Gold has traveled the world and experienced a lot, culturally speaking.  Have you spent time in Africa or the Caribbean studying their music?

Eo8:  Your new album Flying Lessons is coming out in May, do you have any festivities planned for the release?

FG:  Interestingly, our most success has benign France, of all places, we’ve done nine tours through France.  The first thing we’re doing, of course, is going right back to France.  We’re also doing some shows in California.  We don’t have anything else set up for now, but we’re really pushing to support the record when it comes out in the U.S.  We haven’t played Nashville in about two years, we’d love to go back to Nashville.

Eo8:  Luke singing in Hebrew is kind of your thing, and your song “Ta’alumah” is in Hebrew on the new album.  What is the song about?

FG:  That song is interesting.  “Ta’alumah” means “flight of the bird.” Luke was actually born in Israel; the song is about his dad, and the bravery it took for him to move his family across the world, his dad being “the bird” that flew from Israel and moved his family to Los Angeles, not really knowing anyone, to bring up his family in a place that he thought was better for his family.  It’s a sweet song.  Luke’s oldest brother is about 12 years older than he is, and he speaks Hebrew the best.  He actually came to the studio when we recorded that song and I think he helped Luke with some of the lyrics, it was very sweet, the brothers working together on a song about their dad.  It was a cool experience.

Eo8:  The first single from Flying Lessons is “I’m In Love,” which is accompanied by a groovy, colorful stop-motion video.  How hands-on was the band in the making of the video?

FG:  The video has all the little characters dancing around; those characters are ones we drew while we in the recording studio making the album, we record it all live, and the idea was that when you weren’t working on your part, or if someone was doing an overdub or something, we had a big pad of paper and 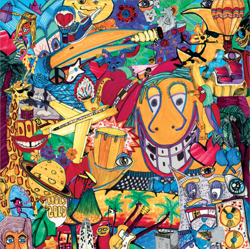 some markers there, and we drew our instruments, drawing things inspired by lyrics from our songs, and then we started taping them to the wall and made a collage of them in the control room.  When we were done, we were like “that’s the album cover!”  It’s cool because we made the album and album cover at the same time.  So then we hired a designer to put together the final collage, and thought it would be fun if all the characters we drew could be in the video.  So much work went into that video; the production company cut out all those characters and then made them move around.

Eo8:  What is your favorite thing about performing live?

FG:  I think the best part is what I call “the feedback loop.”  I imagine it as like an infinity symbol, you know, the figure eight?  That’s kind of what it feels like sometimes, when you’re shooting music out into the audience and the audience is taking in that music and they’re giving you vibes right back, and the band takes in those vibes and it just goes back and forth.  At really good shows I feel like everybody comes together, it’s like a group mind that happens, you almost lose your individuality and come together as one.  It doesn’t always happen, but when those times happen, the music is elevated by the audience, and you can’t capture that in a recording studio.  That’s when music feels like it comes alive.

Eo8:  What is the goal for your music, what do you hope your music accomplishes when you send it into the atmosphere?

FG:  I think that most of our music is groovy, it has a beat, and we’re hoping that it will make people move and dance.  Also, life is hard, and I think we want to be life-affirming with our music.  There’s so much poison in the world, it’s good to have some medicine to counteract the poison, and hopefully that what our music creates.  Not to say that our music is necessarily light and carefree, there are some heavy topics in our lyrics, but we can make those heavy topics feel light.

Eo8:  What else do we need to know about Fool’s Gold?

FG:  The way people digest music these days, they listen to one song for a minute and decide whether they are interested or not.  We might be a lower burn for some people, but I guarantee if you listen to this album twice, you’re going to want to listen to it a third and fourth time and then a tenth time.  You just have to give it a chance.

[You can (and totally should) preorder the album here:  http://foolsgold.merchnow.com]