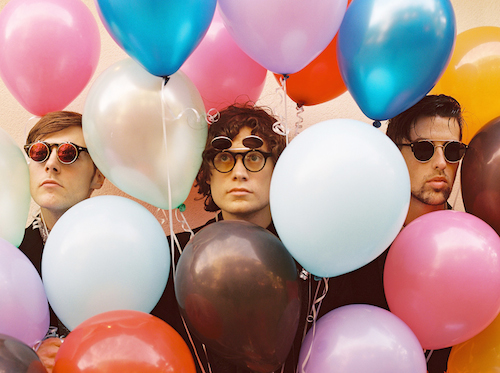 Three-piece indie rock band DREAMERS, comprised of Nick Wold, Chris Bagamery, and Nelson,  is causing a stir in the alternative music world; this cosmically unique outfit is getting major love from alternative radio and national media outlets, and the coolest part is, they aren’t even signed to a record label.  I’ve been hearing the first single from their new self-titled EP, “Wolves,” on the regular, and was (probably a little too) excited when I found out they were going on tour and making a pit stop in Nashville.  Get to know them, then go see them!

Eo8:  To be an unsigned band, you’ve had some pretty amazing radio exposure, praise from major outlets (like Spin and Billboard), and you’re about to go on a national tour with Stone Temple Pilots.  What’s the secret of your success so far?

DREAMERS:  We drink tons of muscle milk, and pray to the sky lord Celestius nightly.  But in addition to this, any exposure we’ve gotten is a direct result of hard work from an amazing team of collaborators.  It’s important to be around positive people who can lift each other up.  There’s a lot of talk about it being a bad time for the music industry, but it’s also possible for an unsigned band to reach people worldwide with the click of some buttons.

Eo8:  What’s the inspiration behind your penchant for the cosmic and the psychedelic?

DREAMERS:  We have a lot of lyrics about sleep and dreams, and are fascinated by how strange it is to live between waking and sleeping.  We are also fascinated with the cosmic perspective; reminding ourselves of the whole universe swirling around us.  We want to convey the weirdness and wonder that we see in nature. We spend so much time trapped in our small reality bubbles; we try to pop them and remind ourselves to not get trapped in our little worlds…Must. Expand.

Eo8:  Your website features a page where viewers can submit a dream to the “DREAMERS Society.” I’m intrigued.  What happens if I submit mine?

DREAMERS:  It’s all very secret, but what I can tell you is that we are collecting all the dreams of dreamers throughout the world and plugging them into a supercomputer.  It will soon grow a mind of its own and become the first artificial consciousness, a ‘dream baby’, if you will.

Eo8:  “This Album Does Not Exist,” your debut LP, is due out in late summer.  What was your recording experience like, and will there be festivities surrounding its release?

DREAMERS:  The recording session was a joy.  We recorded with our amazing producer Danny Kalb at Ravensworth Studios in Virginia.  It is secluded in the woods and under the stars and we were really able to detach from our daily lives and really submerge in the process.  Some nights we were able to watch the space station pass overhead.  There will be endless festivities!! And you’re invited!! Join us!!

Eo8:  You’re currently in the middle of a pretty intense touring schedule.  What do you do to keep your sanity while you’re on the road?

DREAMERS:  Who said we keep our sanity? I don’t remember anyone saying that.  But really, I think we get along well as people, which is key, and we enjoy traveling  and meeting all the people of the world, driving thousands and thousands of miles.  It is a strange nomadic existence living on the road, but I think we all were made for it.

Eo8:  What can we expect from a DREAMERS live show?

DREAMERS:  Expect to transcend to another plane of reality through music, and to maybe detach and enjoy yourself for ONCE.

Eo8:  This one’s for Nick…did you thoroughly enjoy turning into a werewolf in the “Wolves” video?

DREAMERS:  Ha, oh yes I did very much.  I personally love making videos and that one was one of the best.  There was actually a full moon when we shot it, so there wasn’t a need for much makeup.

Eo8:  What will Nick, Chris, and Nelson be dreaming about tonight?

DREAMERS:  Random associations, experiences and moments, relived and interpreted by our brains.  Imagined worlds, people and lifetimes without order or meaning, lived and then forgotten.  See you there.

If you’re in or close to the Music City on March 9th, DREAMERS will be performing with Born Cages at The End, but if not, no worries!  They’re making the rounds and I bet they’ll be in your neighborhood soon! 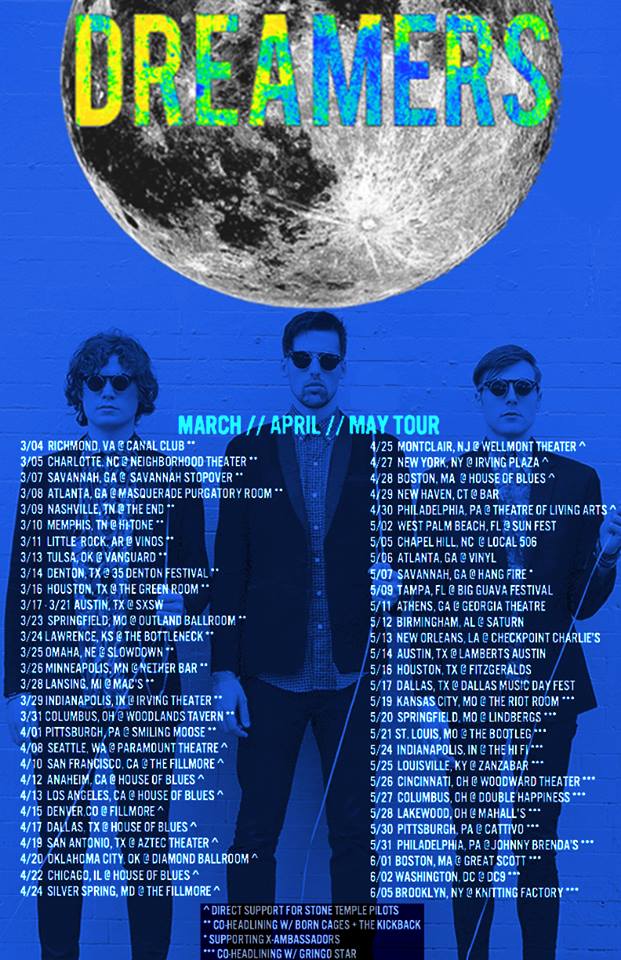