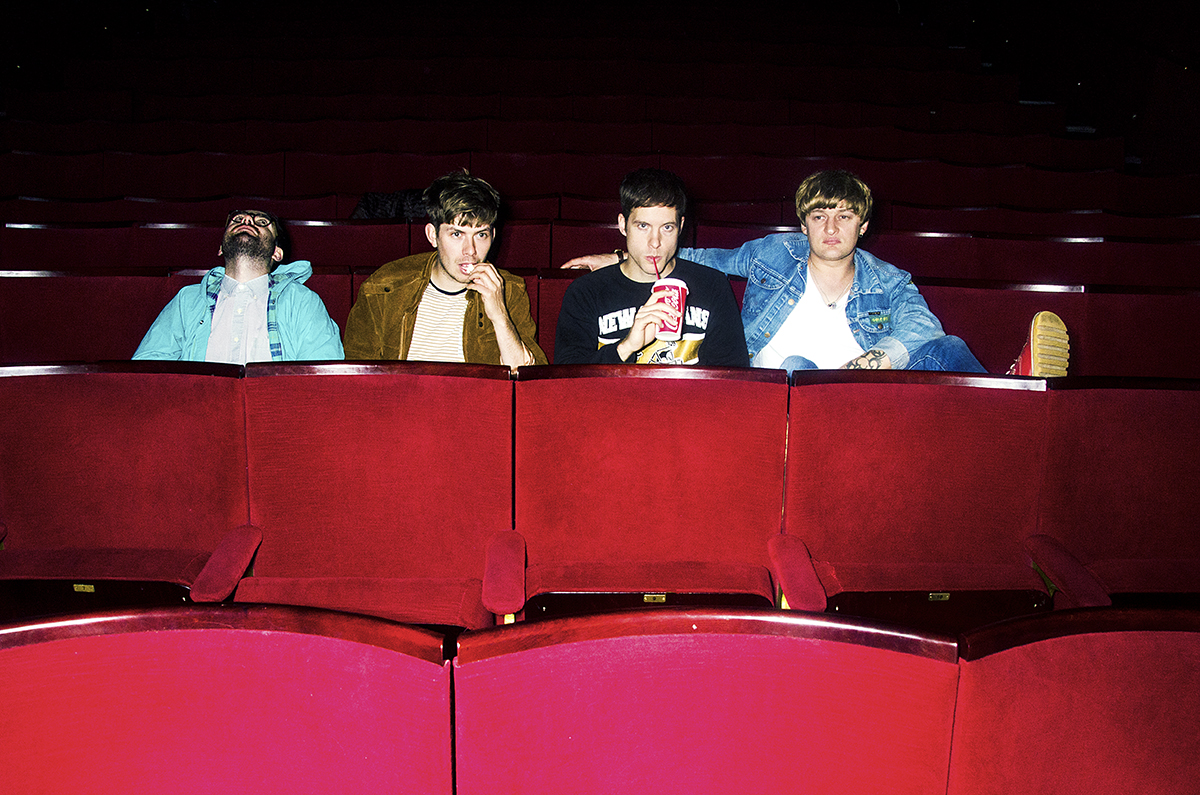 My favorite radio station began playing a song called “Get Closer” by London foursome Life In Film not too long ago; I was totally captivated and I couldn’t get enough of it.  I knew I had to get in touch with them and find out who exactly was behind this catchy tune, and they were kind enough to answer some questions just for us!  Life In Film is comprised of Dominic Sennett (bass), Edward Ibbotson (guitar), Micky Osment (drums), and Samuel Fry (guitar and vocals); I’ve had the privilege of previewing their debut album, Here It Comes, due out this spring, and it’s fantastic!  I don’t know about you, but I definitely pay attention when four British gentlemen make beautifully infectious music together, just sayin’….beloved readers, enjoy!

Eo8:  How did Life In Film become a band?
LIF:  When Sam went to university he met Dom and Micky, and they started a band.  They eventually moved to London and asked if I (Edward) wanted to join them; I had always wanted to do some music with Sam so we all got together, immediately had a laugh, and from there we knew we could all be in a band together.
Eo8:  What were your musical backgrounds individually before you became LIF?
LIF:  I guess your early influences are what your parents drill into you, like most kids in Britain you were always going to be exposed to things like the Beatles and the Stones, maybe a bit of soul and classic R & B stuff.  As a group though, we could all relate to The Smiths.  They were before our time, but they conjured up a lot about what it was like to be young, living where we did, and going through the things you do at that age.
Eo8:  You have your first full-length album coming out soon.  Did you craft the songs on it around a central theme or with a specific inspiration in mind?
LIF:  We never really have an agenda in anything we do, but in listening to the songs, I would say a lot of the content is definitely about love, whether that is being in love, questioning love, or searching for it, that’s the main theme.  We quite like songs that juxtapose lyrics with a sad theme to music with a bit more energy, so I think sometimes that might come across.
Eo8:  Will you be headed to the US for any tour dates? If so, can you tell us some of the cities you’ll play?
LIF:  Yes!  We are coming over in late April and have just announced a tour with our friends The Wombats which we are pretty excited about.  We are pretty rubbish on our American geography so every date we see we get excited about. For any Englishman, playing New York is pretty cool, but it looks like we are going to quite a few places that we never thought we would be going, like Boston, Indianapolis and Denver…all those places are ones we are excited about as we have no idea what to expect.  I guess it’s like an American coming to Britain and finding themselves in Bristol, only it’s not Bristol it’s somewhere way much better.  We could write them all down but check our Facebook!
Eo8:  Who/what are your musical and personal style influences?
LIF:  I always dreamt of having hair like George Harrison circa 1969, and wearing bell bottom jeans. I’m making the executive decision and saying the band felt the same way.
Eo8:  Describe a typical day for the band.  Any special superstitions or pre-show rituals?
LIF:  I know Sam and Dom have gotten into a bad habit of going to their local Italian restaurant together for dinner, so much so that eyebrows have been raised in the local community.  What me and Micky do together is none of your goddam business. Pre-show ritual usually involves trying to make each other laugh.
Eo8:  What is the London music scene like, and what is it that makes LIF stand out in the London scene?
LIF:  The London scene is so varied that it’s hard to say there is any one scene so, I guess everyone just tries to do their thing and get along!
Eo8:  I heard that LIF had an opening slot with the Rolling Stones!  Can you describe what that experience was like for the band?
LIF:  Yeah that was pretty cool and surreal, Micky managed to take a swig of of Keith Richards’ Jack Daniels. Turns out it was peach ice tea. The joke’s on Mick as he’s sugar intolerant.

3 thoughts on “8 QUESTIONS with LIFE IN FILM”