At the end of each summer, Nashville hosts a weekly outdoor (and free!) concert series called Live On The Green.  Every year I eagerly await the lineup announcement, so I can plan accordingly of course, and this year’s lineup was…in a word…spectacular.  Unfortunately, the weather refused to cooperate the first two weeks, and since I know my limits, I decided to sit those out.  Then came the week that I just couldn’t miss–Johnnyswim, Delta Spirit, with Cage the Elephant headlining…raining or sweltering, I was going to have to suck it up and go.  Twitter told me that our local independent radio station, Lightning 100, was having a little contest: come up with a caption for a picture of CTE’s lead singer, Matt Shultz, and win VIP passes to Live On The Green.  “I can do that!” said I, and perused the list of captions already posted.  None were terribly creative (no offense if you submitted one).  I decided this picture deserved a poetic caption; I let the horses of creativity out of the barn and crafted a 17-syllable haiku, hit the “submit” button, and thought that maybe, just maybe, I might have a shot at winning. 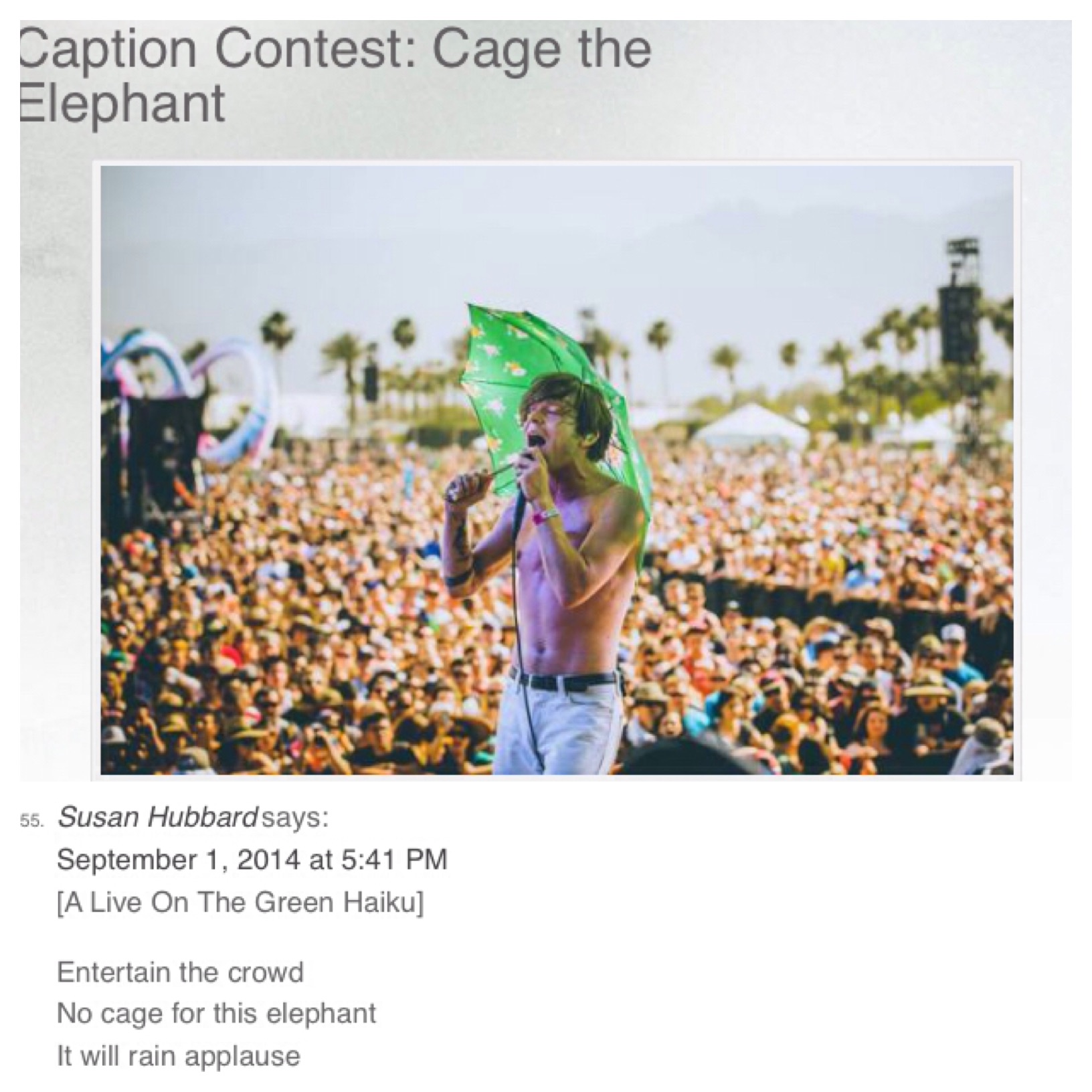 I actually won!  I headed downtown for the show that evening and retrieved my VIP passes; a guest (my loyal sidekick, Jenna, whom I drag everywhere for blog endeavors) and I were now officially entitled to free food and drinks, shaded places to sit, and front-row access.  It was going to be glorious.

I get really excited about openers because it gives me the chance to learn about up-and-coming music-makers; I was a relative newcomer to Johnnyswim, and they did not disappoint. 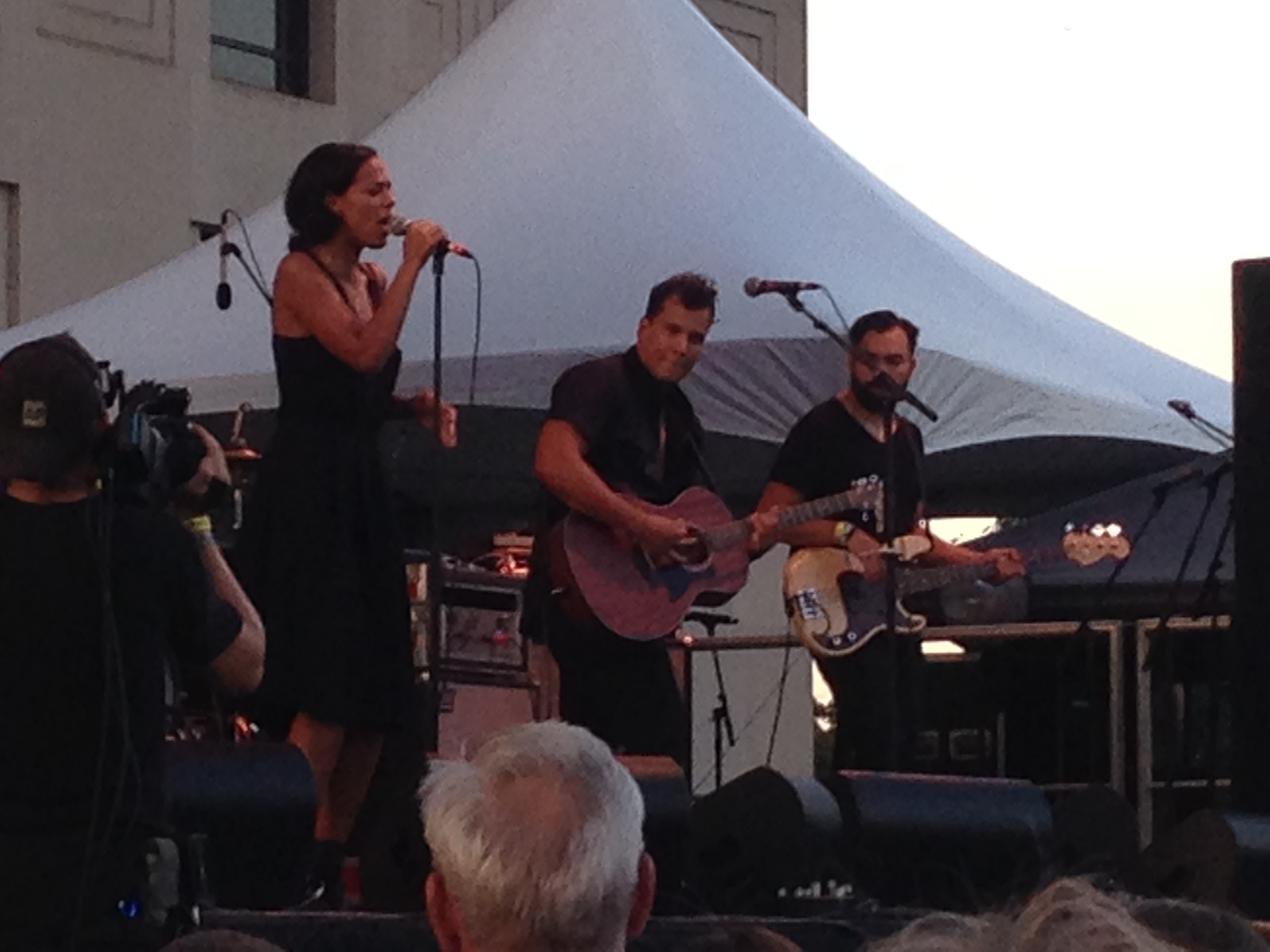 When their set was over, the crowd standing in front of us left (maybe to take advantage of all those VIP perks), so we moved up to the very, VERY front and waited with great anticipation for Delta Spirit, who I thoroughly enjoy.  Delta Spirit took the stage, and GOOD LORD were we close.  Great set from them as well, they were performing songs from their new album Into The Wild. 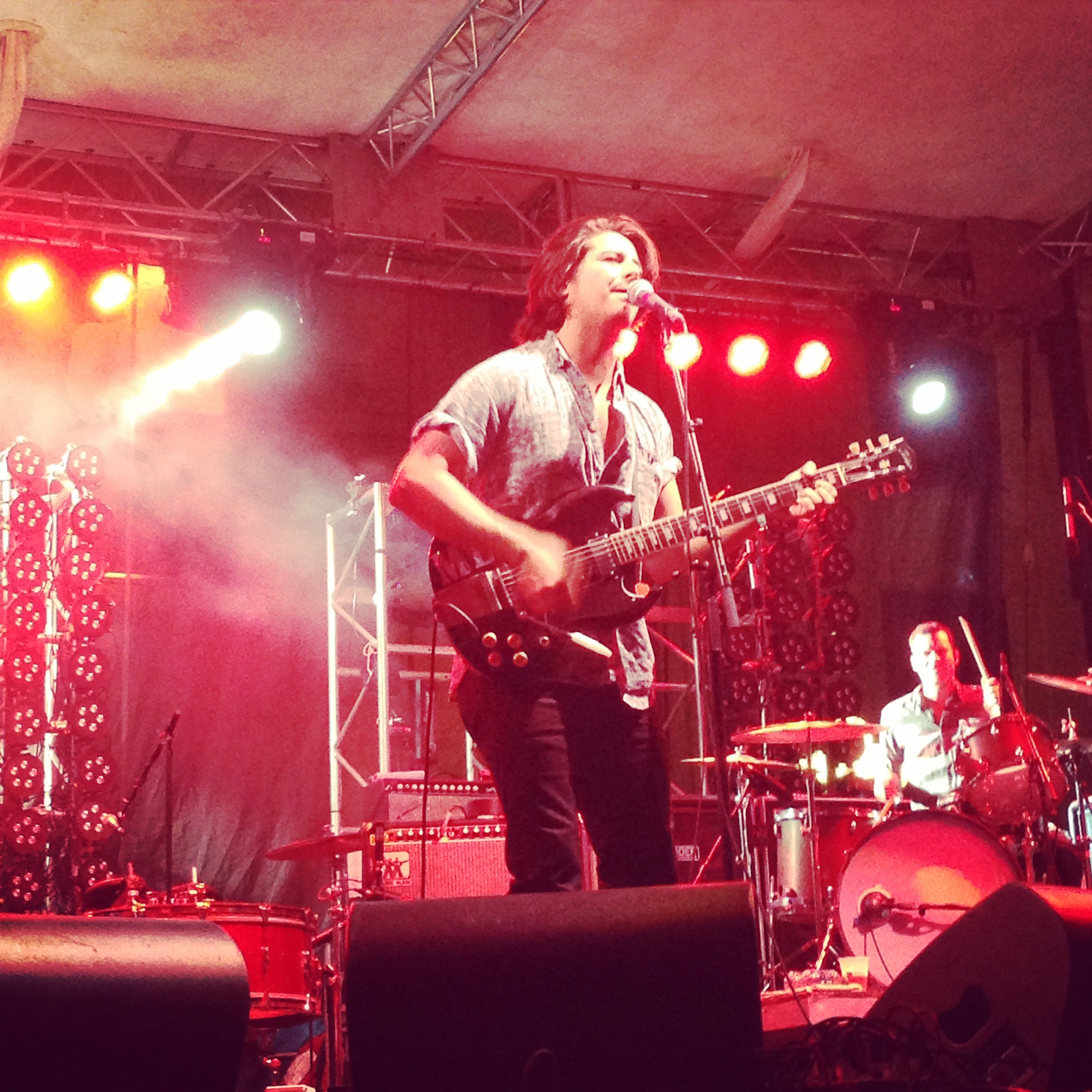 I’d say I’m a Cage the Elephant fan…I own their albums, I saw them open for Muse last year in Nashville, I’ve live-streamed their festival performances from the comfort of my Apple TV-equipped bonus room, with unlimited access to air-conditioning, refreshments, and a clean bathroom (again, I know my limits…festival-goers, don’t judge me).  I’ve read about them, periodically (hee hee…please tell me you get that…), and I get a kick out of lead singer Matt Shultz’s energetically entertaining onstage persona.  I was so ready for this show to begin.  My knees were knocking with anticipation, and man, have I mentioned just how close we were? 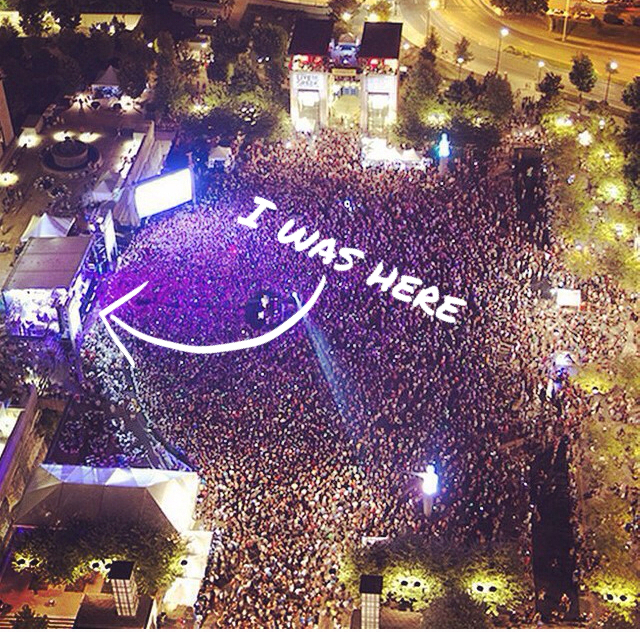 Y’all. Seriously.  It was the stage, then the pit, then me.  I really couldn’t get over it.

Matt Shultz, bless his heart, decided to do some crowd-sufing, so he hopped on us, and we diligently (but maybe not very gently) passed him around.  He safely made it back to the front, minus one shoe. 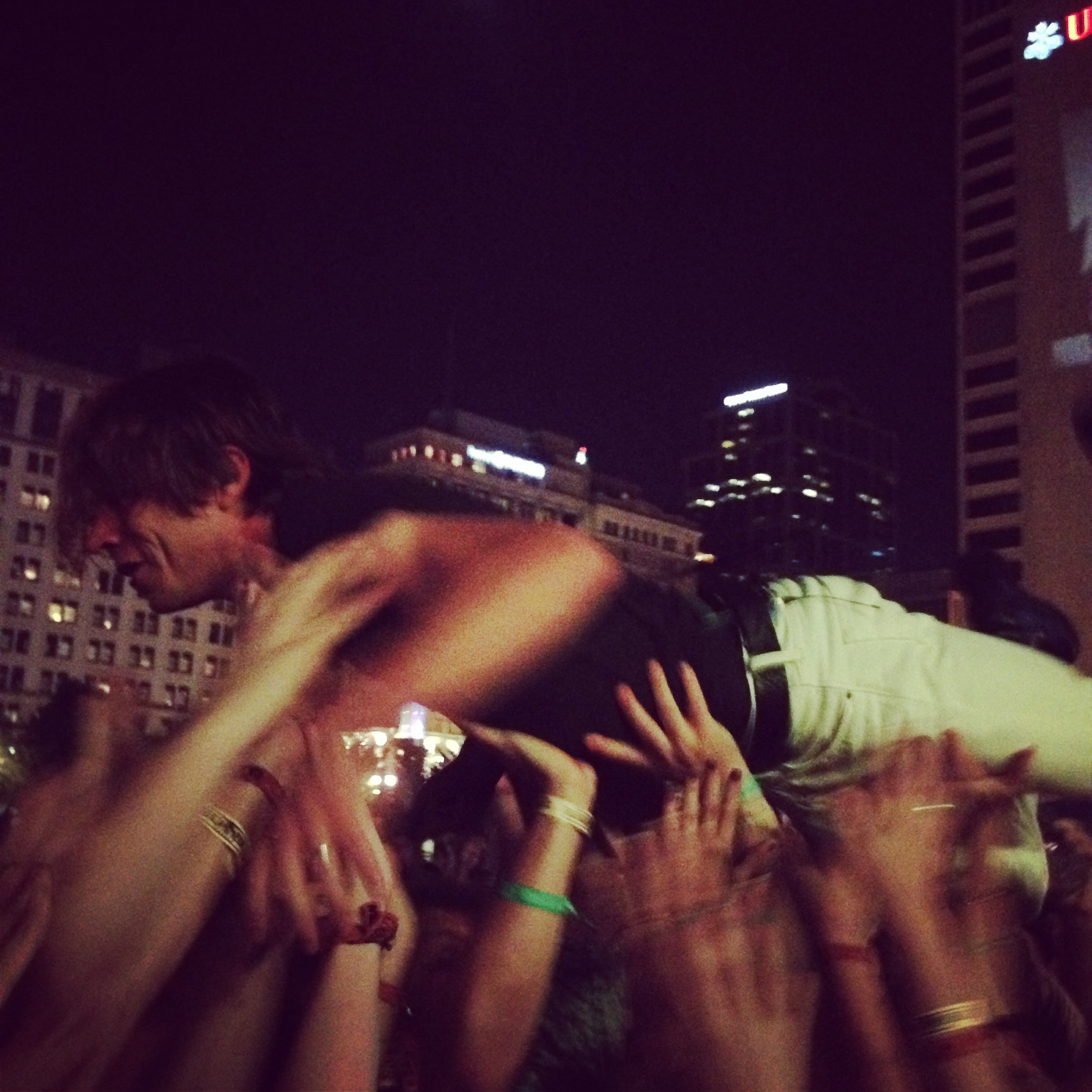 Matt Shultz was all over the place.  I loved it.  Then, guitarist Nick Bockrath, in all his sweaty glory, decided Matt shouldn’t be the only one going mobile; he promptly came down off the stage, stepped up on this stool-thingy in front of me, leaned his back up against my face, and continued to play.  Say whaaaaa? Yep.  I started yelling for Jenna to take a picture, but I think my voice was too muffled (as I was lost in Nick’s shirt), and Jenna was too busy trying to pick her jaw up off the ground to worry about taking pictures.  Unfortunately, it was impossible to take a selfie with my face smashed into his back, but hopefully you get the idea.

Sadly, as do all things, it had to end, and CTE left the stage.  I sure do hope they come back to the Music City soon.  I’m still in shock, my hearing is destroyed, and my hair is permanently parted.  It. Was. Awesome. 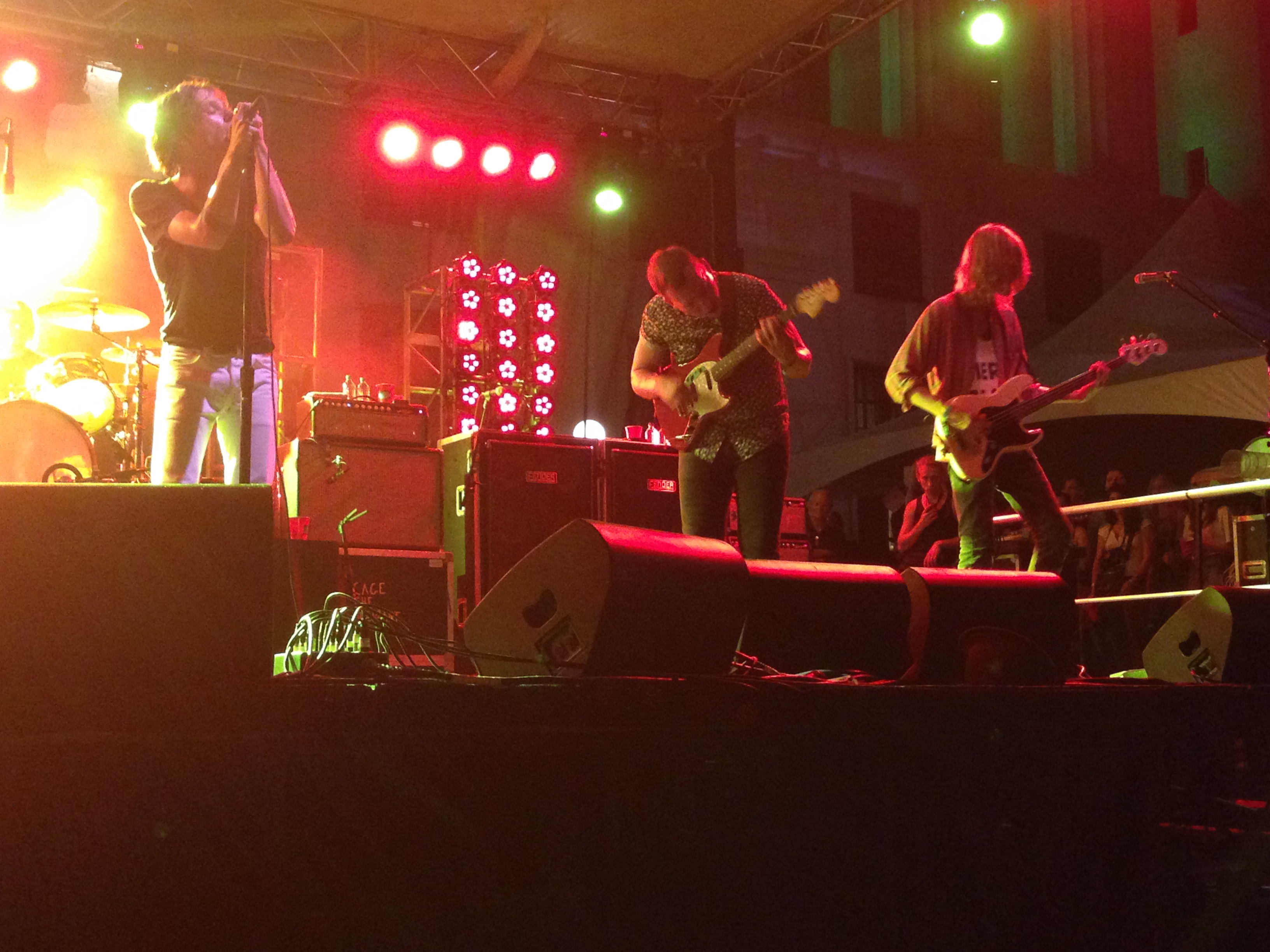