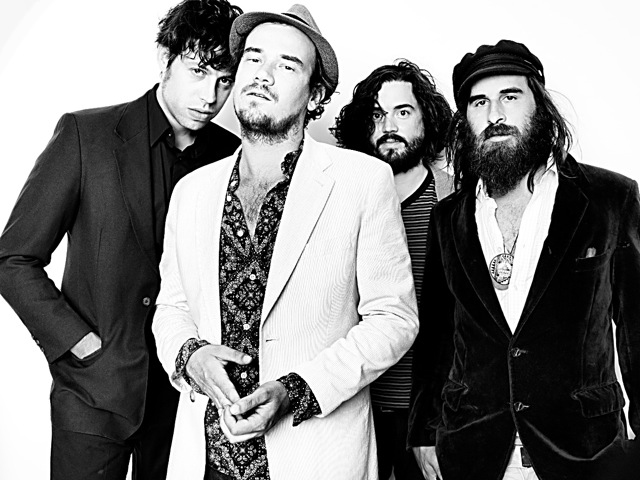 HOW CAN A BAND THAT’S SO SKILLED WITH WORDS PICK SUCH A HEAD-SCRATCHER OF A NAME?

Jon Pareles of the New York Times asked this question at the end of a celebratory write-up of the band.  What’s the story?  While watching Alan Lewandowski, a.k.a. Anita Fix, perform in New York, wearing women’s lingerie and a clear plastic mask, Andrew Katz was taken aback, at first by the ridiculousness of the scene, and then profoundly moved to tears by the humanity coming through in the music being performed behind that mask.  He leaned over to a bandmate and said, “I think we have a name.”  As Andrew says, “if you write us off just because you don’t like our name, then maybe we just weren’t meant to be friends.”

FROM NYC TO NASHVILLE TO HOT CHICKEN

New York City’s music scene is over-saturated, and faced with issues like pay-to-play scenarios and the nightmarish logistics of transporting the band around the city to even get to a gig,  CPM decided it was time for a change.  Having much admiration for Andrija Tokic, the band wanted to cut a record with him at The Bomb Shelter in Nashville; they wanted to play some shows in New Orleans, and also at the legendary Bottle Tree Cafe in Birmingham, so a tour was booked around those destinations.  CPM fell in love with Nashville, and eventually found themselves spending more time in here than they were at their homes in NYC; Nashville’s culture of musicians who really know music, who respect songwriting and its history, the kindness of the people, and the concentration of amazing bands makes the Music City such an interesting place.  That and Bolton’s Hot Chicken.

This band doesn’t play it safe.  The intensity of their music is inspired by the need to communicate and the drive we possess as human beings to live fully, a fact, says Andrew Katz, that is marginalized by society at every turn; he adds, “we are spiritual beings in physical form and it feels so good to be fully dilated.  We want to let go of the shackles, to lift out of it, to be reminded that we’re alive.”  That drive is apparent when you see them perform, and in their music videos; the video for “So Real,” created by friend Joshua Shoemaker, is a chronicle of which Katz describes as “road-doggin’.” Their style is bluesy, gritty, punk, and all heart; however, they don’t subscribe to a particular genre.  CPM wants to have all options open all the time, with the goal being to make a “full” album.   Playing songs again and again doesn’t bother Katz; the songs are born anew when played for different audiences, and for him, it’s pure joy.  CPM promises to play selections from their new LP Being There, released this year by Kings of Leon’s label Snakes and Serpents, but will also play some new material on their upcoming tour.

Katz is listening to Muddy Waters, The Kinks, and Fred Astaire at the moment, as well as Squares on the Front Porch, Etta James, and even Native American music, at times.  He says he wants to listen to artists who have a high level of “revelation,” his and his bandmates’ standard for performers and art; Katz says if you go see an act, you don’t know them, but after the performance you feel like you know the artist because they reveal so much of themselves in their art, it’s something so moving, it makes the hair on your arms stand up….that’s “revelation.”

Parting words from Katz on behalf of CPM? He wants you, my loyal readers, to know that they love you.   Also, please be kind to your neighbors, buckle up, return your library books, and never underestimate the overwhelming power of simple human kindness.  And go to Bolton’s for some hot chicken.

Clear Plastic Masks will be performing at Mercy Lounge with Hurray for the Riff Raff on July 16th.   They are on tour for the next few weeks, and will be heading out with friends White Denim in September.  You  really shouldn’t miss it.