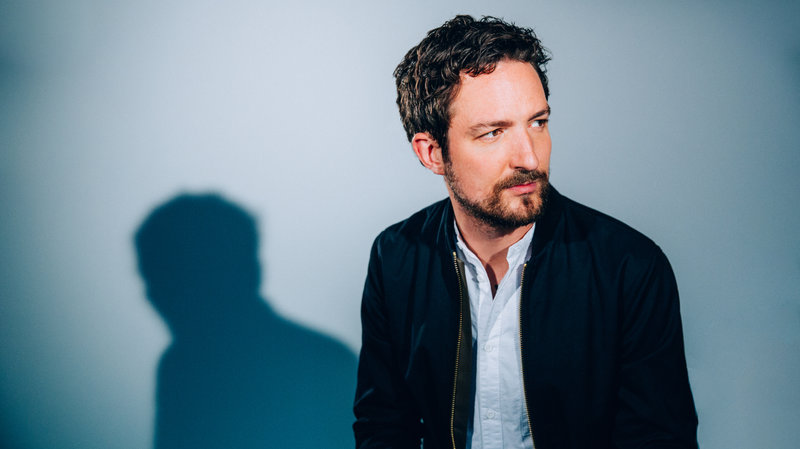 ”Well, I mean I couldn’t resist. What can I say?” laughs singer-songwriter Frank Turner of his hardcore roots. “It’s remained my favorite thing in the whole world.” Turner had been making punk rock for about eight years when he and his bandmates parted ways, which caused a shift in trajectory and a change in musical style.

“In a funny way, it felt like the more punk thing to do at the time,” he explains of his solo work. “I sort of felt like I was on the verge of being formulaic in my own creativity. That’s obviously something that I don’t think any artist wants to be, but it’s particularly not a punk thing to do. The simpler and less pretentious answer is that I just started listening to a lot of different types of music and I wanted to try my hand at it. There was something about stripping everything away back to one person with one instrument, which is what it was at the beginning of my solo career, that felt really kind of raw and direct, in the way that punk rock is supposed to be,” he says. “No frills, no fucking around. There are no drum solos, no weird time signatures. It’s like ‘here’s four chords and some lyrics’ and hopefully people will listen to what I’m trying to say and enjoy the songs. Having spent years being in a band when you’re up there with a bunch of other people, to go from that playing completely alone was really challenging for me, and it was kind of scary at times,” he adds. “But because it felt like that, I thought I was doing the right thing.”

Some have said that folk music (or in Turner’s case, a lyric-focused singer-songwriter style) is just punk slowed down. Turner believes the two genres have more in common than meets the eye—or the ear. “I think one of the main things that I’ve always enjoyed about the two is that they’re iconoclastic,” he says of both genres’ tradition of bucking, well, tradition. “One of the main things I took away from punk rock as a kid was it wasn’t supposed to be about egos. It wasn’t supposed to be about rock stars and about ‘look at me, I’m the fucking aristocrat in the room’ or whatever. It was like when a band was on stage it was their go to communicate with you and with the community at large, and then when their set finished, they’d just get back in the audience and be part of the crowd,” he continues. “It’s that idea of it being a conversation amongst the community as opposed to one sort of elevated class speaking down to another.”

Turner has put his own efforts towards continuing that community-wide conversation with his latest record Be More Kind, a 13-track set of tunes with a political bent—but Turner takes a refreshing approach to these polarizing topics. “There are elements of Be More Kind that don’t really don’t fit into the mold of kind of folk music or punk rock, and I’ve been exploring kind of different musical avenues. In terms of the lyrics, I’d been sort of avoiding politics as a subject for a couple of records for various reasons, mostly because it makes my life a lot easier,” he laughs. “But the world really took a turn to the crazy in 2016 as I understood it. I found myself unable to not write songs about what was going on. To a degree, I can only write about what I’m inspired to write about, and about what ideas and messages suggest themselves to me,” he explains. “Suddenly I just found myself writing all these songs. But the thing is, it’s a weird record in a way because it’s an attempt to write a non- partisan political record, which I know sounds like a contradiction in terms. And on that level. I’ve been describing as a social record instead of a political record because it’s not a record about the content of a disagreement, it’s a record about how we conduct our disagreements with each other, which I think is a really important thing that not many people are focusing on right now.”

While he’s glad some artists are exercising their freedoms of political dissent in a confrontational way, his goal was different. “This was my contribution to the debate. It was to say that we need to remember how to disagree with each other like adults,” he says. “We need to remember that the purpose of political debate is supposed to be to persuade people that you’re right, and they should join your team, not just to insult people in 140 characters in a funny way. We need to think about this quite carefully.” While he’s had a little backlash from both sides of the political divide, the response has been mostly positive. “Even the people who disagree with me have kind of accepted the tone in which the record is written, which is really important to me,” he reveals. “On the flip side, some people have said I’m sitting on the fence and I’m not putting my money down or I’m being too soft or whatever, and I have a number of responses to that–one of which is that everybody’s in favor of being more kind as long as it means people you don’t like being nice to you–but the hard part is you being nice people that you don’t like. I don’t agree with the whole ‘punch a Nazi’ thing,” he adds. “Everybody I know who is in favor of punching Nazis looks to me like someone who would lose a fight. I think they’re playing with fire and things they don’t understand, and I think they will come to regret it very quickly.  I’m strident in my opinions about all of these things,” he says. “We have to find ways of communicating with people we disagree with. We all have to live in the society at the end of the day and human beings have screwed each other and they’re either going to do that through words, or they will do it through violence. You can call me a hippie if you like, but I’m going to choose words every time.”

Turner is on tour now in support of the album, which brings him to the Cannery Ballroom Stage on October 4th. “One of the things I like about Nashville is that we really, through kind of brute force, have established an audience there in a way that I really enjoy,” he levels. “That old cliché about Nashville is it’s like kind of trying to sell candy in a sweet shop. It’s a city that’s just absolutely packed full of musicians, so showing up and playing music to most people like, well ‘big whoop’,” he laughs. “I really feel like little by little we’ve really kind of built something up. I always pick the support acts I tour with, it’s a point of pride for me, and I’m very pleased to say that we have Sam Coffey & the Iron Lungs who are from Canada who are amazing and we have Bad Cop Bad Cop, who are an anarcho-feminist band from California. I’m particularly pleased with this little combo here,” he adds. “I hope people will come out early to catch the supports.”